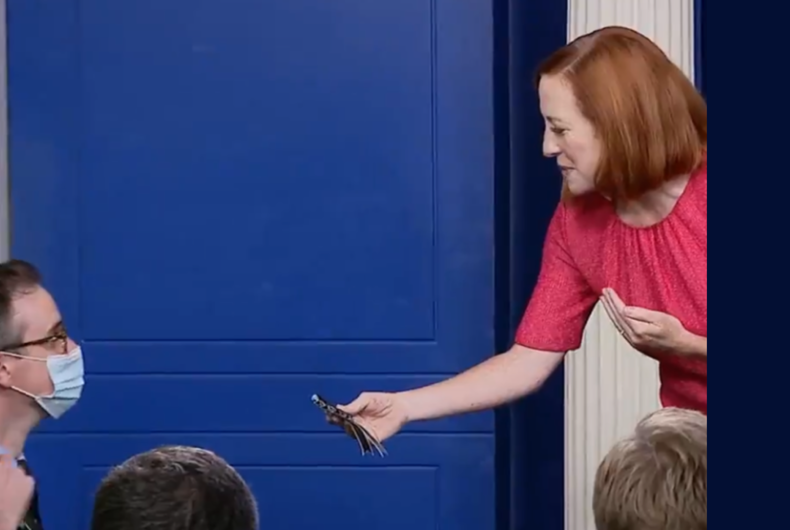 At Friday’s White House Press Briefing, Press Secretary Jen Psaki opened the briefing by first addressing an international agreement on corporate tax increases. Then, before taking questions, she had a quick surprise.

“I know we talk about serious things in here, but we have one fun thing today,” Psaki said.

“Chris is getting married in a week,” she explained before the audience of correspondents applauded, referring to her colleague, White House Deputy Press Secretary Chris Meagher. “So you won’t see him for two weeks, and nobody can call him or bother him for two weeks.”

So, Psaki decided, “Just to embarrass him a little bit,” that she would get him “a little special sash to wear, just for the briefing,” she claimed.

“Because everybody should know that Chris is marrying up, as many people do,” she joked to laughter.

“And also, a pin,” Psaki added. She then gave a button with an attached ribbon to Meagher, as the correspondents began chanting for him to put them both on. Meagher did, at least for the briefing (although it appears his fiancée has other plans.)

The sash and button read, “Groom-to-be.” One person remarked that both were “Halloween-themed,” since they were both black and orange.

Psaki then immediately got back to business, taking the opening question from Aamir Madhani, the White House Correspondent for the Associated Press. “I don’t know how I top that,” Madhani quipped.

The room burst into laughter again, with a voice remarking, “impossible.” Psaki said that Madhani could give Meagher advice. Madhani then asked about Biden’s decision regarding the unveiling of White House communications relevant to the January 6 insurrection, and Psaki explained Biden’s decision not to assert executive privilege over any documented evidence deriving from the White House under Donald Trump.

Meagher was the former National Press Secretary for out presidential candidate Pete Buttigieg’s campaign 2020. After Buttigieg ended his historic campaign, Meagher became a communications advisor for Michigan Gov. Gretchen Whitmer (D), serving through the beginning of the coronavirus pandemic.

"We have one fun thing today!"@PressSec Jen Psaki gives @chrismeagher46 a sash and button for his upcoming wedding. pic.twitter.com/E2ZnNVpyKX

.@jrpsaki is the best boss…I just don't get to wear a sash that often, especially in the briefing room! But thankful for her and the team.

And I definitely agree with one thing – I'm marrying up with @vvaldiv! https://t.co/4mtzAoGr07

Normally I would agree that @chrismeagher46 is marrying up (he is) with @vvaldiv but the truth is they are both incredible people with huge hearts. I am grateful to call them friends and to celebrate their love. Que viva el amor! ❤️ https://t.co/s9jNioViLG

A button and sash from @PressSec ahead of @chrismeagher46’s wedding next weekend. pic.twitter.com/UfwXoAgeps