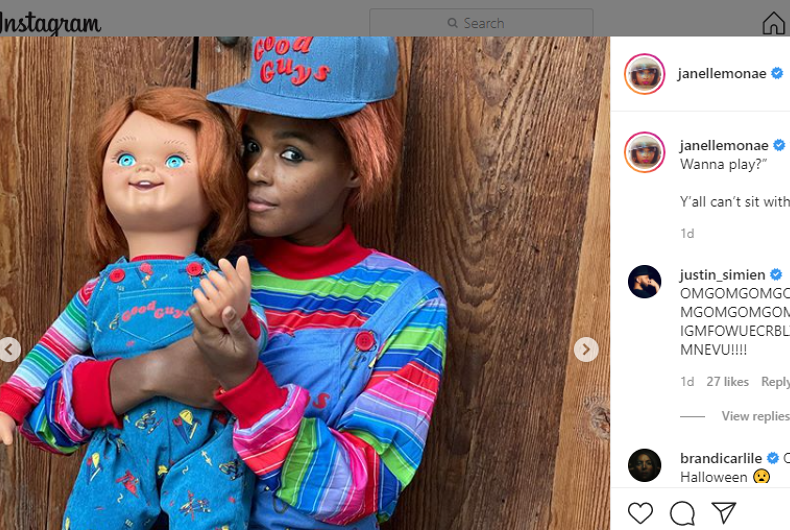 2020 hasn’t offered much in positivity, but at least social media allows us to still see our friends, family and celebrities get dressed in their creative outfits for Halloween.

A holiday with historic appreciation and enthusiasm among LGBTQ people, it’s no surprise that some of the best costumes of the year come from those within our community. After all, Halloween is “the great gay holiday”, as legendary lesbian feminist poet Judy Grahn once said.

Understandably, most people will be getting dolled up to sit at home, in front of their computers and smartphones, due to the current pandemic. With COVID-19 infections making a meteoric rise right now, leading to shut downs and cancellations of Halloween events across the country, there’s not as much to go out for this weekend anyway.

Y’know, other than voting early.

Here are some of the stars who had costumes that stole the show this Halloween weekend:

Leslie is currently filming in her first year as the lead of the CW series The Batwoman. LGBTQ Nation got a first look at her new costume for the show just earlier this week, and she showed off some poses in the new get up for Halloween.

Going into the weekend… 😂 pic.twitter.com/Oy4hEfV0IF

She was able to take a break, though, from playing the femme caped crusader of Gotham. Instead, she dressed as the Scarecrow, a classic Batman universe villian and patient in the franchise’s Arkham Asylum.

Batwoman returns to air for its second season starting on January 17, 2021.

The out Olympian has spent his time hosting the digiseries “Useless Celebrity History” on the now-defunct Quibi, and just signed on to co-create a comedy at NBC.

Rippon dressed up as a pussy…cat – making a play on the title from the hit song “WAP” by Cardi B and Megan Thee Stallion.

Harris and his family – husband David Burtka, and his twins Gideon and Harper – are LGBTQ Halloween OGs, having shown off their creative talents annually for years now. This year, they went with a classic Willy Wonka and the Chocolate Factory theme. Burtka was the titular Wonka, Gideon was Charlie Bucket, Harper was dressed as Veruca Salt, and Harris dressed as Slugworth, Wonka’s rival candy maker.

This family definitely got the golden ticket. 💛 (📷: @actuallyNPH) pic.twitter.com/EhH1671VDG

Both Janelle Monáe and Lizzo — who are both out — were on similar wavelengths this year. Both donned multiple Halloween costumes, and both went as a very popular character this year: The Fly. As in, the fly that took temporary residence on Mike Pence’s head during his Vice Presidential Debate with Kamala Harris.

Here’s Monae’s rendition of the fly, preparing with a publicist for public appearances so the public can finally get to know them. They have already turned down “Flywitness News” and Buzzfeed.

Known as the FLYCON to you. But i am FLYYYRENE to my family. Since the debate a lot has happened. I can’t wait for you to get to know ME. Thank you to my publicist @JTfirstman for believing in me, a true wind beneath my wings. More to come… pic.twitter.com/qjxVPRfSME

Omggggggg @Lizzo dressed up as the fly from the 2020 Presidential Debate for Halloween 🎃 pic.twitter.com/XI8TAq92D3

Like Rippon, Lizzo would also go as a “WAP”, but her rendition was less pussycat, and way more ‘wet’.

Lizzo goes as a WAP for Halloween.

She was originally supposed to be in the video for WAP but was on vacation at the time. 😭 pic.twitter.com/ln3INqFXt4

Monáe made waves with a second costume, dressing up as a life-sized ‘Good Guy’ Chucky doll from the infamous Child’s Play franchise.

The Buzzfeed alum and member of the comedy troupe The Try Guys who came out last year used a tool he might be most recognized for – viral videos – to show off numerous looks based off of characters from the Nickelodeon series Avatar: The Last Airbender and The Legend of Korra.

He even performs some of the changes in stellar fashion in a 24-second TikTok video.

Lil Nas X easily stole the show. He had to follow up on his infamous 2019 turn as Cam’ron…

The out rapper is a well-known fan of Nicki Minaj, and he showed it this Halloween. The 21 year old cosplayed as his fave as she looked in her 2011 music video for the hit “Super Bass”, complete with a copy of the clear motorcycle prop she sat on in the VMA-winning video.