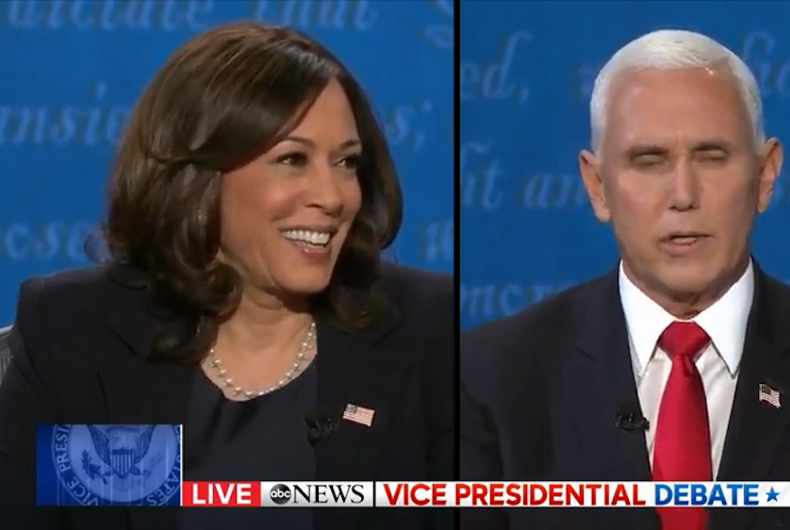 Kamala Harris served up a filet of Mike Pence for dinner tonight.

“I will not be lectured by the vice president,” Harris said at one point. She wasn’t kidding.

The Vice President had the unenviable position of trying to defend the indefensible, starting with the first question about the Trump administration’s lethal coronavirus response. He didn’t have much of a chance running up against Harris, a former prosecutor who knows how to appeal to the jury – in this case, the American voter.

Harris hammered Pence for knowing how bad the virus would be and withholding that information from the American people.

“The American people have witnessed what is the greatest failure of any presidential administration in the history of our country,” Harris said.

Pence didn’t help his case either. He does manage to display something like empathy, which Trump completely lacks. All Pence could muster in response to his own disastrous performance as head of the coronavirus task force was a salute to the freedom to ignore mask mandates and the resiliency of the American people. (God knows, they needed it.)

The debate certainly wasn’t the exercise in dysfunction that last week’s debate was, thanks to Donald Trump. The notable exceptions were Pence’s incessant attempts to commandeer Harris’ time – and her pointed reminders that she was talking.

Pence also talked over moderator Susan Page, reminding women voters of Pence’s weird attitude toward women. Given the huge gender gap that Trump is already experiencing, Pence’s mansplaining is not going to win back any women voters.

The real problem was that both candidates preferred to ignore the questions they were asked. In some cases, that was a missed opportunity, at least for voters.  It would be important to know just what conversations Harris has had with Biden about succession planning. Pence almost assuredly never had any such conversations with Trump, who is convinced he is immortal.

Pence was the worse offender, preferring instead to go on the attack and using the same messages over and over again.

Unsurprisingly, Pence does share one trait with Trump: fluency in lying. For example, Pence insisted that Democrats spied on the Trump campaign.

In what was perhaps the most remarkable bit of dissembling, Pence tried to convince viewers that Trump’s “very fine people” comment about white supremacists was actually part of a pattern of condemning right-wing groups.

No one votes for the vice president. Voters are looking at the top of the ticket. If you need any reminder, just try to recall the highlights from the Pence-Tim Kaine debate in 2016. This election is a referendum on Trump, and no amount of Pence’s reassurances will distract voters from the President’s record.

Perhaps the best commentary on the debate was offered by a stray fly that took up residence on Pence’s head for a few minutes as if it were a dung heap. Who are we to argue with nature?

I'm not gonna say @KamalaHarris killed @Mike_Pence but a fly mistook him for a cadaver. #VPDebate pic.twitter.com/eewQ9wlWcL