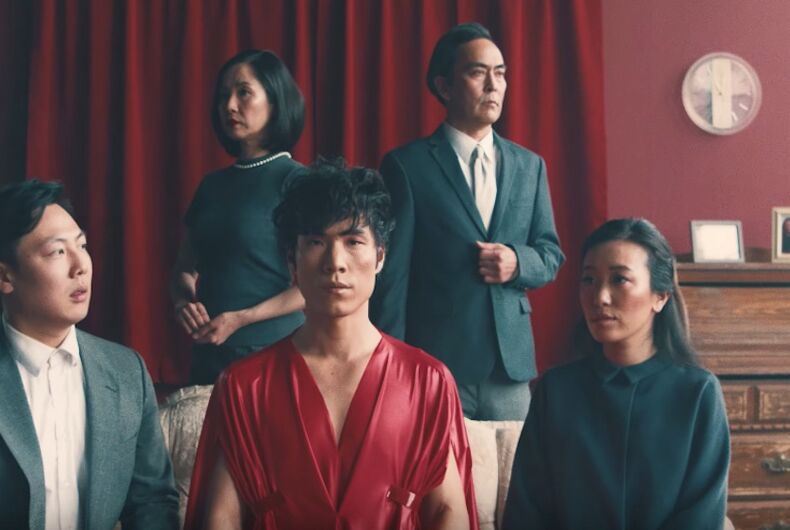 Eugene Lee Yang — a 33-year-old queer choreographer better known as one of Buzzfeed’s “Try Guys”  — recently came out as gay in a Twitter post with an accompanying dramatic music video which he wrote, directed and choreographed.

The video features instrumental music by Odesza and dramatic interpretations of societal queerphobia including a shooting at a gay bar, a gay bashing, an angry sermon at a conservative church and familial rejection.

While Yang had previously identified as both queer and LGBT, in a recent Twitter post, Yang wrote, “I created this music video as my personal way of coming out as a proud gay man who has many unheard, specific stories to tell. I withheld because of fear and shame shaped by my background but I promise to give my full truth in the rest of my life’s work.”

In a recent interview with The Advocate, Yang said:

“Growing up in Texas, I was already dealing with the fact that I didn’t even know I was Asian until a certain age. I just was informed about it in a somewhat negative way by [my peers]. And that immediately put me into that mindset where I felt very othered you know.

My safety always felt like it wasn’t something that I could consider a given. And so that sort of shaded a lot of my first sort of ways that I covered in regards to my openness about my sexuality because I already had seen the way some other openly gay kids were treated in my school — and it was really, really terrible…. There were a lot of elements in society, that were kind of pointing me in the direction of being very careful.

Even if it’s just the smallest thing, like what label I go by, I think to find the truth and express it with full confidence…. I’m just announcing I’m a gay filmmaker, actor, producer, viral video maker, whatever you want to call me—but I’m gay, and that’s the perspective I’m coming from.

Mom arrested for confronting her son’s homophobic bullies at school