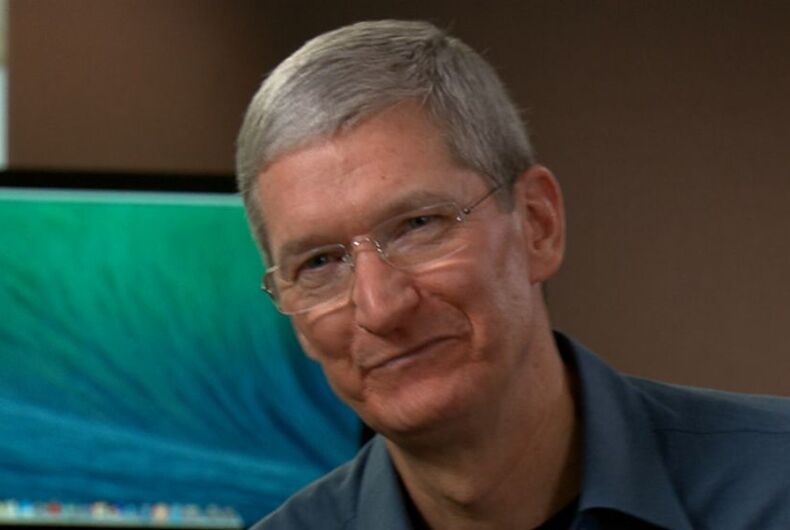 Where some schools are banning gay speakers, Stanford invited Apple’s openly gay CEO, Tim Cook to address its graduates today. And he mentioned Stonewall, a noteable inclusion on its 50th anniversary during World Pride month.

While much of the speech was about Silicon Valley needing to accept responsibility, Tim Cook mentioned his Stanford the 50th anniversary of Stonewall to stress the importance of leaving a legacy for the future.

Choking up during the speech, Cook told the gathered Stanford graduates:

“In a few days, we will mark the 50th anniversary of the riots at Stonewall. When the patrons of the Stonewall Inn showed up that night, people of all races, gay and transgender, young and old, they had no idea what history had in store for them. It would have seemed foolish to dream it.

“The door was busted open by police, it was not the knock of opportunity or the call of destiny. It was just another instance of the world telling them that they ought to feel worthless for feeling different. But the group gathered there felt something strengthen in them. A conviction that they deserved something better than the shadows and better than oblivion. And if it wasn’t going to be given, they were going to have to build it themselves.

“I was 8 years old and a thousand miles away when Stonewall happened. There were no news alerts, no way for photos go to viral, no mechanism for a kid on the gulf coast to hear these unlikely heroes tell their stories. Greenwich Village may as well have been a different planet, though I can tell you that the slurs and hatreds were the same. What I would not know, for a long time, is what I owed to a group of people I never knew in a place I’d never been.  Yet I will never stop being grateful for what they had the courage to build.”

He then called on the graduates to become “builders” themselves, changing the world for the better, saying, “It’s about making peace with the fact that you won’t be here for the end of the story.”

He also called out Silicon Valley for not taking responsibility for its privacy failures.

The timing was right as YouTube, owned by Google, has had a recent scandal where they claimed that Steven Crowder’s multi-year homophobic and racist harassment of Vox’s Carlos Maza didn’t violate their standards — during Pride month, no less.

Though the Tim Cook Stanford speech didn’t mention Google, Facebook or any other company by name, Cook clearly addressed this type of behavior, saying:

“Lately, it seems this industry is becoming better known for a less noble innovation – the belief you can claim credit without accepting responsibility. We see it every day now with every data breach, every privacy violation, every blind eye turned to hate speech, fake news poisoning out national conversation, the false miracles in exchange for a single drop of your blood.”

He added: “It feels a bit crazy that anyone should have to say this, but if you built a chaos factory, you can’t dodge responsibility for the chaos.”

Cook also spoke out against digital surveillance, telling the grads, “If we accept as normal and unavoidable, that everything in our lives can be aggregated, sold and even leaked in the event of a hack, then we lose so much more than data. We lose the freedom to be human.”