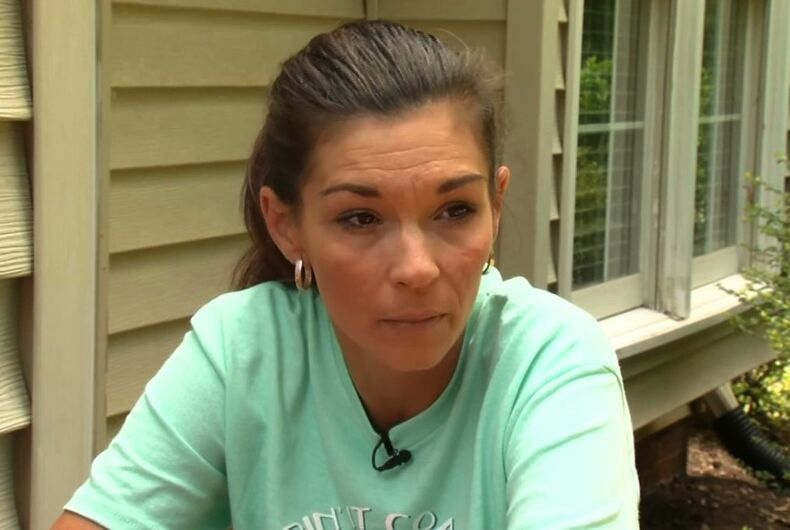 When Jamie Rathburn found out that kids at Greenbrier Elementary School were calling her third-grade son “gay” and “stupid,” she was upset. But then she saw him come home with bruises and scratch marks on his neck, she was furious.

The kids told him that no one cared about him, had hit him in the neck with computing device and thrown him off of a slide.

She emailed and met with school faculty and administrators, but she claims they merely responded that “boys play rough” and did nothing else to change the situation. When she heard that the bullying had gotten so bad that a teacher had to follow her son around on the schoolyard, she took matters into her own hands.

She entered the school without permission from the front office and confronted a group of her son’s third-grade classmates and their teacher.

Rathburn told CNN, “I walked right in that school [and] told those children that bullying wasn’t okay. If they wanted to continue then I needed to talk to their mommas because the school wasn’t doing anything.” She also cussed out her son’s teacher and the principal, according to police reports.

After she posted a video about the incident on Facebook, she was arrested and booked into Greenville County jail on a charge of non-student interfering, disrupting or disturbing schools. The district later issued a no trespass order for preventing her from for all Greenville County schools for her illegal entry. If found guilty for the misdemeanor charges carry, she could face a $2,000 fine and up to a year in jail.

Her family has since launched a GoFundMe campaign to help pay for her legal costs. So far it has raised $3,842 of its $8,000 goal.

Beth Brotherton, director of communications for the Greenville school district, said, “Maybe in her mind she was going there to confront a bully or a couple of children, but in not knowing who those were and choosing to yell at dozens of innocent kids, there is nothing appropriate about yelling at other people’s children’s in a school setting after you’ve snuck in illegally.”

Rathburn said, “I don’t regret standing up for my child one bit. I regret the way I did it.”