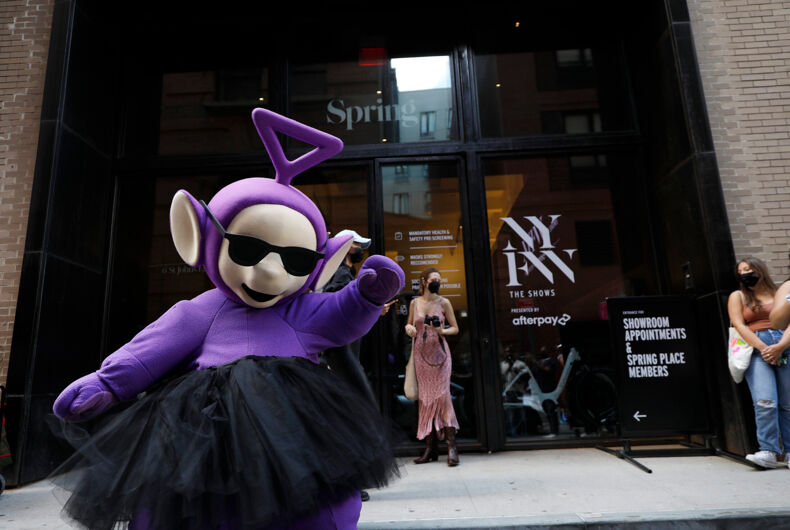 Far-right pundit and former TruNews host Lauren Witzke claims that she “always knew that the Teletubbies were little gay demons.”

Her remarks about the beloved children’s show characters were made in response to a Twitter post by the Teletubbies brand, asking out rapper Lil Nas X if they could “get a feature on the next album.”

The tweet Witzke shared a screenshot of is real, and the Teletubbies included edited version of Nas’s Montero album cover, with the rapper swapped out with a different Teletubby in each version.

Lil Nas X responded to the Teletubbies, saying that he is more than willing to collaborate with the iconic quartet.

.@LilNasX can we get a feature on the next album? 🦋💕 pic.twitter.com/b6BNsr7Lz6

alright bet! me and tinky winky on the hook, dipsy & po on the verses and we’ll let laa laa do the outro https://t.co/Luqx2t25Jx

Perfect, we’ll see you in the studio @LilNasX! https://t.co/3GjkOIX67T

It’s far from the first time the Teletubbies have been accused of being proponents of the LGBTQ “agenda.”

In 2019, former Trump aide Sebastian Gorka said that Teletubbies “started that whole trans thing.” Gorka, who lost his job in the White House because he couldn’t retain security clearance, made the comments in a response to a caller complaining that millennials have been “brainwashed” by the schools and children’s programming to accept LGBTQ people.

“Above a certain age you have to take responsibility for your own education and your own understanding of the truth,” Gorka responded. “I think that whole trans thing started with Teletubbies. Remember? One of them wore a tutu.”

In 1999, now-deceased televangelist Jerry Falwell earned nationwide scorn when he chastised the makers of the children’s program for creating what he insisted was a “gay rights icon.”

”He is purple — the gay-pride color; and his antenna is shaped like a triangle — the gay-pride symbol,” he wrote in his ministry’s magazine, National Liberty Journal. He also noted that the purple character, Tinky Winky, carries a purse-like bag.

WildBrain, the company that licensed Teletubbies in America, denied that the character was intended to be a gay role model at the time.

This year, however, the company has released its first ever Pride collection.

“This Pride Month, we’re celebrating that ‘love who you are’ spirit through our Collection of ready-to-rave fashion that makes Tinky Winky, Dipsy, Laa-Laa and Po very proud,” WildBrain’s chief brands officer Michael Riley stated. The full collection is still available for purchase at Teletubbiespride.com.

For most of the last year, Witzke was one of the co-hosts of TruNews’s flagship program with the far-right network’s founder, long time anti-LGBTQ pastor Rick Wiles.

Witzke and frequent TruNews guest Milo Yiannopaulos filled in for Wiles entirely for a period over the summer, when he came down with coronavirus. Witzke claimed Wiles and others at TruNews contracted the virus because the network was battling “demonic spirits” due to Yiannopaulos declaring himself as “ex-gay.”

Then, last week, Witzke abruptly departed TruNews alongside the show’s other longtime co-host Edward Szall, after Trump sycophant and MyPillow.com owner Mike Lindell accused the network of being a front for “fake news.”

Now, Witzke — a former candidate for the U.S. Senate representing Delaware — is appearing on “The Stew Peters Show,” which constantly claims to “debunk” the coronavirus vaccine.

Meanwhile, Lil Nas X proudly thanked “the gay agenda” when accepting an award last week. He’s currently a nominee for LGBTQ Nation‘s Hero of the Year Award, open to voting along with the other LGBTQ Nation Heroes Awards until September 30.

He just released his debut album, MONTERO, yesterday to massive acclaim and already accumulating millions of sales through streaming of its three lead singles — in addition to predictable anti-LGBTQ backlash.

The Teletubbies, for their part, are also living their best life and continue to ignore the haters. They’re about to celebrate their 25th anniversary as beloved TV stars. Just this week, Tinky Winky — the purple Teletubby first accused of promoting the LGBTQ “agenda” by Falwell all those years ago — was caught out and about during New York Fashion Week.

Another Teletubby also wanted to get in on the Fashion Week festivities, with Dipsy somehow getting edited into a photo with out singer Frank Ocean on the red carpet for the Met Gala.