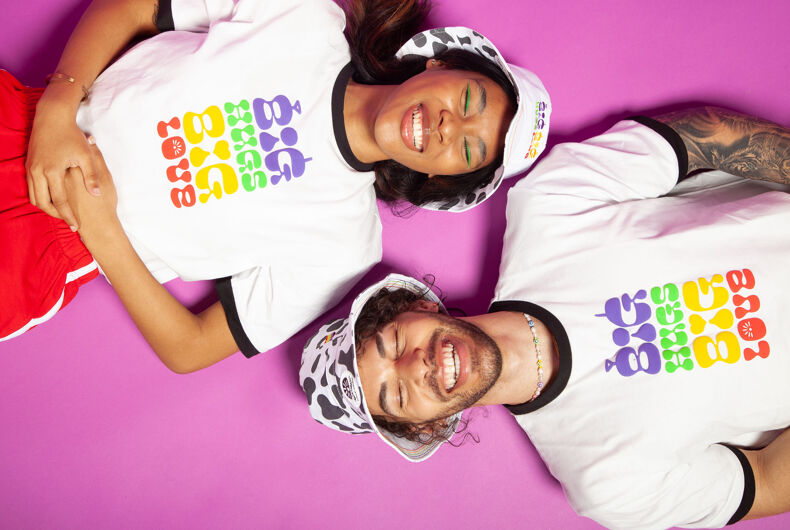 The Teletubbies are finally embracing their rainbow colors.

On Thursday, fans rejoiced as the quirky children’s show which originally ran from the 1990s to 2001 announced its first ever Pride collection, and the products are being made and marketed to the show’s mostly now-adult fanbase.

Centered on the themes of “Big Hugs, Big Love,” and “Teletubbies Love Pride,” the collection features 90s-themed streetwear that a press release describes as “both iconic and nostalgic.”

The collection offers everything from tube socks to a bucket hat to a sling bag.

For those willing to shell out big bucks to relive their childhoods frolicking with Tinky Winky, Dipsy, Laa-Laa, and Po, there are even custom, made-to order two-piece suits.

“The Teletubbies have always embraced their own offbeat quirkiness and sense of style,” said Michael Riley, Chief Brands Officer of WildBrain, the company which owns Teletubbies.

“This Pride Month, we’re celebrating that ‘love who you are’ spirit through our Collection of ready-to-rave fashion that makes Tinky Winky, Dipsy, Laa-Laa and Po very proud. We’ve taken the most iconic elements fans know and love about the Teletubbies and designed a playful Collection with fashion flair that we hope fans will love to wear this Pride Month and all year-long,” he added.

The custom two-piece suit is at a suggested retail price of $4,995. Other products include pins, tank tops, tees, bucket hats, suggested at between $10.99 and $34.99 retail price.

The announcement has been met with excitement by adults who grew up with the show, many of whom have long celebrated Tinky Winky as a queer icon.

The character’s queerness was brought to light by, of all people, anti-LGBTQ televangelist pastor Jerry Falwell, who, in 1999, declared Tinky Winky a gay role model because he carried a purse, sported the gay pride color, and had an antenna shaped like a triangle (a symbol of Pride.)

Now, with the Pride collection, those memories are flooding back, and fans are celebrating that the Teletubbies have not only finally “come out,” but have done so in style.

You can find the full collection available for purchase now at Teletubbiespride.com.

TELETUBBIES COMING OUT WITH PRIDE MERCH… FOR ME. THIS WAS FOR ME. I CONSTANTLY WIN, IVE NEVER LOST

Not saying that me being gay and also being Po in memes and gmod had anything to do with this but this merch is meant for me https://t.co/G8iJFx5GNM

Pride in Pictures 2000s: The battle for marriage equality