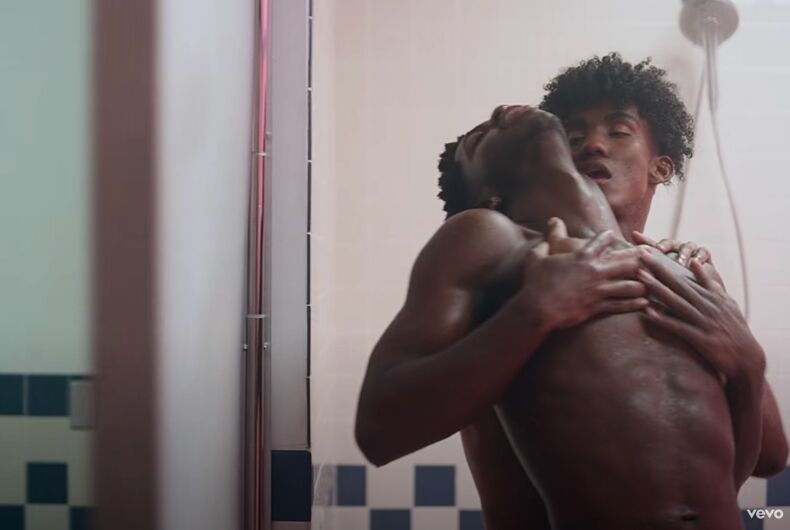 Lil Nas X in the video for "That's What I Want."Photo: Screenshot

Lil Nas X’s debut album, Montero, has finally been released and the internet is here for it. The out singer also dropped his latest video for the song “That’s What I Want.”

The video continues the theatrical stories from his previous singles that didn’t shy away from his sexuality. In fact, the video is the most explicitly gay yet.

Related: Lil Nas X had to get security after the video for “Montero” came out

He’s taken heat from fellow rappers, politicians, and the religious right for being out and proud, but Lil Nas X hasn’t toned it down one iota. In fact, the more they complain the more he pushes the envelope.

Whether it was getting licked by a man during a performance on Saturday Night Live, dancing naked in a prison shower, kissing a male dancer at the BET Awards, or giving Satan a lapdance, Lil Nas X throws the double standard of straight vs. gay sexuality to the wind.

As he’s pointed out, it’s not “too far” if you’ve already seen a straight person do the same thing.

“That’s What I Want” includes graphic depictions of gay sex, tender male-on-male moments, and lyrics that make it clear he’s singing about a man. It also features a cameo appearance by Billy Porter – and a reference to Brokeback Mountain.

Lil Nas X’s video for “MONTERO (Call Me By Your Name)” earned three awards at MTV’s VMA Awards this week.

“First I wanna say thank you to the gay agenda,” Lil Nas X said while accepting the award for Video of the Year. “Let’s go gay agenda!”

It includes a “baby registry” for each song that encourages fans to donate to several social justice charities – including trans and HIV groups.

And on Twitter, the reaction has been extreme as fans proclaim their love for the singer – and the gay agenda.

Im afraid at this point I have no choice but to stan #MONTERO pic.twitter.com/KKRUIVleBM

me going to force my friends to stream #MONTERO
pic.twitter.com/zHMoKtVlzc

.@LilNasX has created a “baby registry” for his debut album, #MONTERO, where fans can donate to nonprofit organizations dedicated to each track.

The gay taking over my body listening to @LilNasX new album #MONTERO 😩 pic.twitter.com/qCQUSokrUe

Mfs while watching the THATS WHAT I WANT music video😩 @LilNasX #MONTERO pic.twitter.com/2xPB4uSWWd