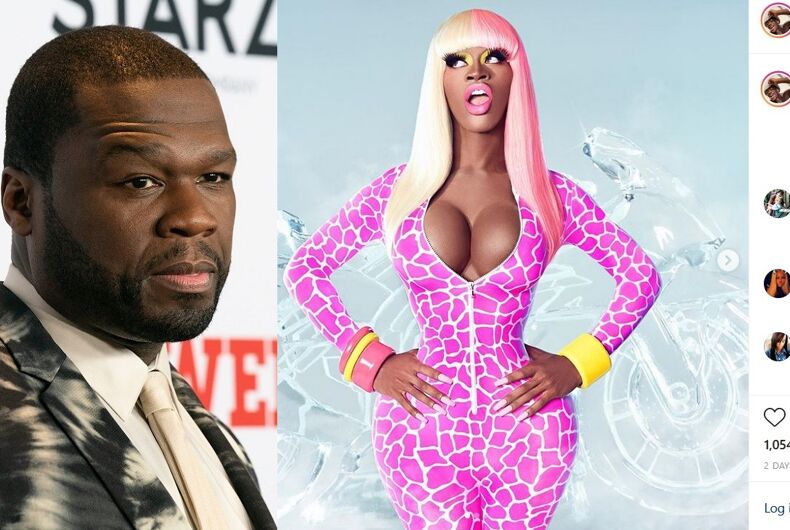 Lil Nas X dressed up as an amazing drag version of Nicki Minaj for Halloween and then spent days responding to homophobia, including comments from rapper 50 Cent.

Nas posted a photo of himself as Minaj in her legendary pink giraffe-print catsuit from the “Super Bass” video for Halloween over the weekend.

While most fans loves Nas’s take on the look, some decided to make it about hate.

“How much money u think Lil nas x is being paid to destroy the minds of young black kids to go against their God?” one fan commented, according to Today.

“yes because ur child is gonna say ‘lil nas x dressed up as nicki minaj so why should i worship god anymore,” Nas responded dryly.

“What the fuck, Nikki come get him !!! Lol,” 50 Cent tweeted, misspelling the hip-hop diva’s name.

👀what the fuck, Nikki come get him !!! Lol pic.twitter.com/p4NPouo3QS

“Why u in barb business?” Nas responded in a since-deleted tweet. A “barb” is a fan of Nicki Minaj.

Musician Dave East also had some comments about Nas’s costume, allegedly calling the “Old Town Road” performer “bati man,” referring to a Jamaican anti-gay slur, and telling him to “bun [burn] up.”

Nas responded by calling out East for “butchering the hell out of the [Jamaican] patois.”

it’s “batty man” niggas can’t even be homophobic the proper way smh butchering the hell out of the patois https://t.co/2PLYQvKBaA

Nas wasn’t done. Just this afternoon, he tweeted, “It’s november 2nd and grown men are waking up to have group discussions about a costume i wore on halloween.”

it’s november 2nd and grown men are waking up to have group discussions about a costume i wore on halloween.

Even if Joe Biden wins, the Supreme Court will still wreak havoc on our rights