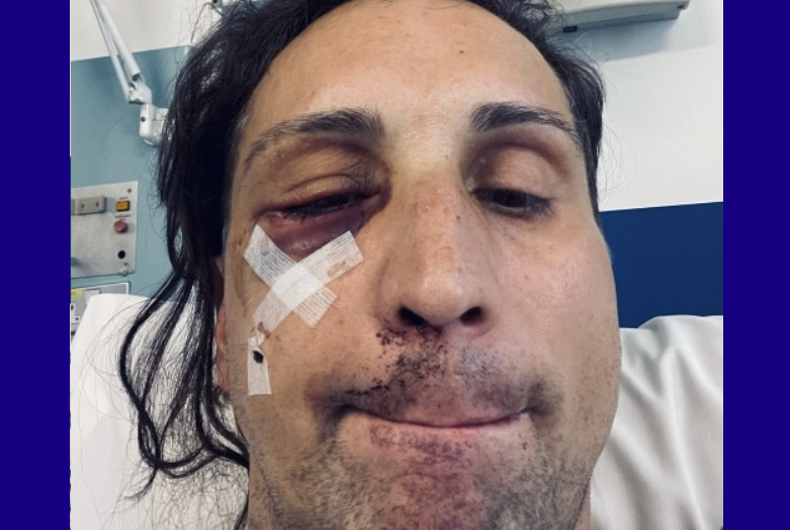 A gay man has been attacked in what continues to be a violent wave of anti-LGBTQ hate crimes in the U.K., saying his life was in danger when a man hit his face with a hammer.

To ensure other LGBTQ people keep themselves safe, Lóránt-Árpád Tompos has decided to speak out about a violent assault he experienced around 2 a.m. on August 18.

Tompos was walking home from night out with friends in the English resort town of Torquay, Devon, when a group of men and women began following and harassing them.

“One of the girls made a phone call on speaker phone and loudly said she was being harassed by gays,” Tompos told Pink News. “Next thing you know another group of males had arrived outside my friend’s house.”

The situation continued to worsen until one of the men took out a hammer and viciously hit Tompos in the face. The hammer struck just below his temple.

“That’s the hardest part to accept,” he said, “that he could have caught me on the temple and I would be dead. It’s like a wake up call for me to realize how precious life is.”

Nevertheless, it was a hard road to recovery. The pain made it too difficult to eat for several weeks, and Tompos also had to have a metal plate inserted into his face.

Now he continues to struggle living his life, feeling too afraid to leave his house.

Only one month after the attack on Tampos, another U.K. gay man was also hit in the face in an apparent hate crime.

Matt Brooks was winding down from his evening in the Gay Village of Birmingham, U.K. when a man abruptly approached him. The man punched Brooks in the face with such force that he was rendered unconscious. Brooks is currently facing the potential loss of vision in one of his eyes.

Attacks have plagued Birmingham throughout the summer. In June, a gay couple was left bloody and wounded after being assaulted with knives, and in August, two men in their thirties were attacked with bottles outside of a bar. In September, a 26-year-old woman was subject to a vicious assault.

Government data shows a rise in anti-LGBTQ hate crimes every year since 2015 in England and Wales. Hate crimes in Scotland have also continued to rise. The U.K. government attributes this increase to an uptick in reporting by victims, but according to NBC News, activists argue it is also due to a rise in anti-LGBTQ politicians who feel empowered to speak their minds.

“If there are people in power who are bigoted … that legitimizes people to be hateful in their everyday life,” Rebecca Crowther, policy coordinator at the Equality Network in Scotland, told NBC News.

A September report on rising anti-LGBTQ sentiment from the Council of Europe also singled out the U.K. alongside countries like Poland and Hungary, which have become known for their particularly virulent anti-LGBTQ laws and attitudes.