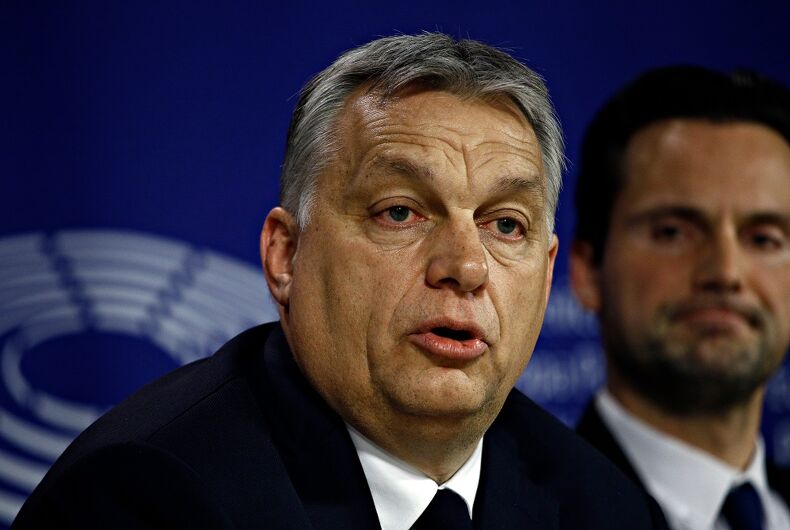 The European Parliament has voted to condemn Hungary’s latest attack on LGBTQ rights, an “anti-pedophilia” law passed in June that bans many TV programs and schools from discussing LGBTQ people.

The resolution passed the European parliament earlier today by a wide margin – 459 in favor and 147 against – condemning Hungary “in the strongest possible terms.” The resolution calls on the European Commission to move forward with a legal case against Hungarian leader Viktor Orbán’s government to overturn the law.

Orbán’s law has been compared to Russia’s ban on “homosexual propaganda” and severely limits public discussion of LGBTQ people’s lives, going so far as to ban advertising featuring LGBTQ people and require sex education workers to register with the government out of fear that they will promote “the representation of specific sexual orientations.”

Supporters of the bill in Hungary said it’s necessary because “children simply cannot process” LGBTQ people and discussions of LGBTQ lives can be “detrimental effect on their development at the given age.”

“This law puts homosexuality and gender reassignment on a par with pornography,” said President of the European Commission Ursula von der Leyen during the debate yesterday. “This law uses the protection of children, to which we are all committed, as an excuse to severely discriminate against people because of their sexual orientation. This law is disgraceful.”

Von der Leven is now under pressure to put together a case against the law before the European Court of Justice. The members of the European parliament who supported the resolution believe that it violates Europe’s guarantees of non-discrimination and free expression.

Even though the resolution is non-binding, it calls for the European Union to delay 7.2 billion euro in COVID-19 relief funding to Hungary because the country cannot be trusted to spend the money in “a non-discriminatory way.”

German Member of European Parliament Daniel Freund told The Guardian that the European Union is likely to approve the funding anyway because they only have about a week to end negotiations and approve a plan for the emergency funding, which he believes isn’t enough time to implement the structural reforms being called for even if the Hungarian government would concede to them.

“My reading is that the commissions are in a pickle,” he said.

Advocates said that the law would even ban the rainbow flag from appearing on TV and in movies.

Last May, Hungary banned transgender people from updating the gender on their government ID’s, saying that ID’s should only list a person’s “biological sex based on primary sex characteristics and chromosomes.”

And in December of last year, Hungary amended its constitution to ban adoption by same-sex couples.

“Hungary defends the right of children to identify with their birth gender and ensures their upbringing based on our nation’s constitutional identity and values based on our Christian culture,” the Hungarian constitution now says. It also says that children must be raised in a “conservative spirit” and that family is “based on marriage and the parent-child relation. The mother is a woman, the father a man.”

Earlier this year, Orbán picked a fight with a small publisher that was selling an anthology of fairy tales, some which included LGBTQ people. The government ordered the publisher to issue a warning that the books showed “behavior inconsistent with traditional gender roles.”

Orbán himself said that the books were “a provocative act.”

Conservatives accuse US women’s soccer team of “disrespecting” the flag. They didn’t.