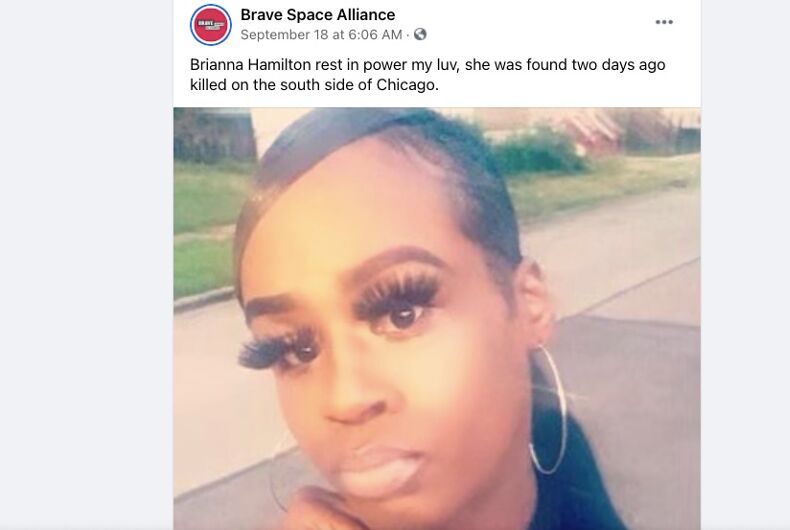 A 25-year-old Black transgender woman named Briana Hamilton has been murdered in Chicago. She is at least the 37th known transgender person to be murdered this year.

Hamilton was shot and killed in the Gresham neighborhood of Chicago on September 17, according to the National Black Justice Coalition (NBJC). She was misgendered and deadnamed by new outlets reporting her death. This possibly delayed community awareness about and proper investigation into her death, the organization said.

“My daughter was a victim of a ruthless murder,” Hamilton’s mother, Ronda Ulmer, wrote on a GoFundMe crowdfunding page raising money for her daughter’s funeral expenses. Ulmer said that Hamilton was murdered in an alleyway.

“I know Brianna was loved by many and at this time your support is greatly needed and appreciated,” Ulmer wrote. “Brianna was a amazing person who touched so many people hearts with her presence and her memory will forever live on. #TRANSLIVESMATTER.”

Hamilton is the fourth trans person to be murdered in Chicago this year, the Human Rights Campaign said.

“I am deeply saddened to hear about the loss of Briana, to hear about another young trans life stolen” said NBJC Deputy Executive Director Victoria Kirby York. “When will there be action taken to end this epidemic of violence? When will there be action taken to protect those in our community who are the most vulnerable? I am once again encouraging lawmakers to introduce and pass legislation that will work to protect the trans community and make their safety a priority.”

This year could end up the deadliest year on record for trans and non-binary people if eight more slayings occur.

At least 44 transgender individuals were murdered in 2020, the deadliest year on record since 2013 when the HRC began tracking transgender murders. The actual number may be much higher as trans murders sometimes go unreported or victims remain misgendered.

The U.S. Census has released data from its first ever survey of LGBTQ people. It ain’t pretty.