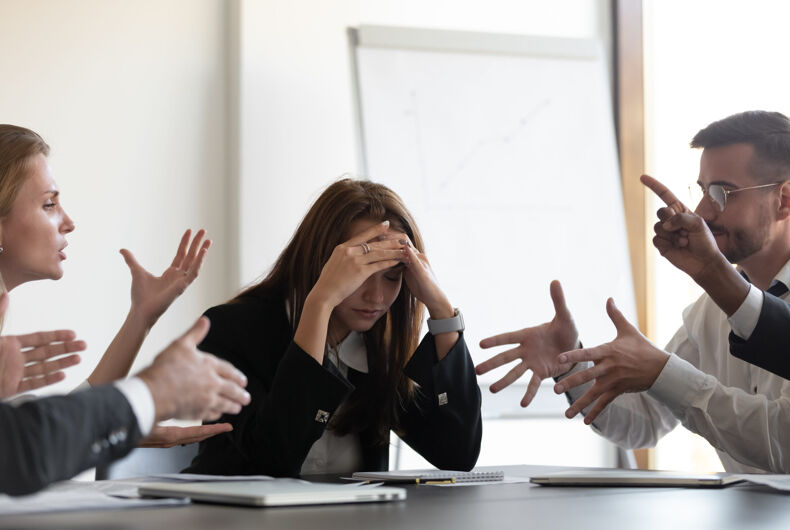 Ian Lawrence-Tourinho, the executive director of the American Institute of Bisexuality (AIB) which oversees the website Bi.org and publication Queer Majority, is receiving criticism for claiming that “pansexuality gave us conversion therapy,” suggesting that abusive practices used to turn queer people heterosexual only began to exist because people began identifying as pansexual.

He  made the comments while asserting that David Rose – Dan Levy’s character from his hit series Schitt’s Creek – isn’t actually pansexual, and the only reason he is identified as such in the show is because “the Rose family is eccentric & detached from reality.”

Lawrence-Tourinho helped organized one of the first recognized Bi Pride celebrations in 2018 through AmBi Social, a social community he created to show, “Being bi is about a lot more than sexuality. It’s a culture of in-between, of understanding multiple viewpoints, of navigating between worlds,” as he told the Washington Blade.

He is also known as the founder of Bi.org, although the site calls itself a project of AIB, founded by bi researcher Fritz Klein in 1998, who they refer to as “our founder” as well.

Lawrence-Tourinho was responding to a tweet posting by writer and Queer Majority columnist Zachary Zane where Zane recalled attending Bi Pride, his “first and only time ever walking in a pride parade.” He praised the fact that “LA’s bi community started celebrating instead of *protesting* at pride.”

“You did that… on the backs of us that did the protesting in the first place,” another user responded, “and you’re welcome.”

Funny thing happened when LA‘s bi community started celebrating instead of *protesting* at pride. The crowd started partying w us. Bi people started coming out of the woodwork, thrilled to finally see an image of bisexuality all about our own strength and joy #Bivisibilityday2021 https://t.co/BUknb0bvkn

Lawrence-Tourinho sent a series of replies back saying that while he has “tremendous respect for the full history of LGBT activism,” he believes “There is a time & place for everything” and that “protesting *pride* post 2000 or so felt stuck in the past, behaving as if no progress had been made.”

The Twitter account @GCBiphobia – dedicated to documenting “Gender Critical [transphobic] people being biphobic” – then replied, “Is that why your organization is blocking bisexuals calling out bi.org erasing pansexuals when as bisexuals, we should know how hard erasure can be?”

Is that why your organization is blocking bisexuals calling out https://t.co/PAH7ZqHUp9 erasing pansexuals when as bisexuals we should know how hard erasure can be?

Bi.org has received criticism in recent days over its inclusion of David Rose (Dan Levy) from Schitt’s Creek on its website as a bisexual character and an accompanying tweet deeming him to be “one of our favorite bi characters.”

Bi.org’s article claimed that the basis for David being called pansexual only comes from his dad, Johnny Rose (Eugene Levy) referring to him as pansexual once, which is inaccurate as Dan Levy — the show’s co-creator — has said himself on multiple occasions that David is pansexual. The character famously says “I prefer the wine, not the label” in the show. He isn’t identified as bisexual at any point.

Despite people pointing this out to Bi.org on their social media, describing the webpage as erasure, they have refused to change their description, ultimately limiting or hiding replies that point that out.

Lawrence-Tourinho initially did not address the issue in his response to the question but instead wrote that “Looking at 100+ years of LGBT history reveals a very different narrative than the revisionist one pushed by… several corners of social media.”

The @GCBiphobia page then continued on, asking Lawrence-Tourinho, “Pan erasure is fine? Because that’s literally what they are blocking bi people for calling them out on.”

Is that why your organization is blocking bisexuals calling out https://t.co/PAH7ZqHUp9 erasing pansexuals when as bisexuals we should know how hard erasure can be?

Lawrence-Tourinho added, “The whole point of the show is that the Rose family is eccentric & detached from reality,” suggesting David being pansexual is evidence of that.

“Bisexuality has meant the same thing since 1892 [and is] build on the framework invented by the 1st [LGBT] activists. Pansexuality gave us conversion therapy,” he concluded.

https://t.co/HH5WoiPuNx posted on their Twitter feed about David from Schitts Creek being bi when he is openly stated as pan on the show.
Is pan erasure is fine? Because that's literally what they are blocking bi people for calling them out on

His *dad* uses the word. David never does. The whole point of the show is that the Rose family is eccentric & detached from reality. Bisexuality has meant the same thing since 1892 &is built on the framework invented by the 1st 🏳️‍🌈activists. Pansexuality gave us conversion therapy

The comments have ignited an uproar among LGBTQ people online.

Do NOT just call something conversion therapy only cuz you don’t understand or like it.

I can’t find any positives here, or any accuracy. This is really shameful and counterproductive.

People pointed out that Dan Levy himself has referred to his Schitt’s Creek character as pansexual.

If David isn't pansexual then what is this? pic.twitter.com/ck6X4MSugk

Last I checked, the people who support conversion therapy don't care if you are bi or pan. They hate all of us.

You're a little off on that. Christian fundamentalists gave us conversion therapy. https://t.co/MiM1TgQiIn

No, that was predominantly religious organisations seeking to torture same-gender attraction out of people. Not sure how you even made the mental gymnastics required to create that claim in the first place.

you think that an IDENTITY is the reason conversion therapy exists and not BIGOTS??

How…🤨 I’m very confused how he got conversion therapy from pansexuality??? Also David is canonically pansexual, Dan even says so. Get out of here with that erasure BS. https://t.co/QRxHcUoc1i

The organization itself argued in defense of their article on David Rose that pansexual is only “one of numerous labels” simply describing bisexuality, saying, “Anybody whose attraction is not limited to one sex fits the scientific definition of bisexuality. It’s both anti-scientific and biphobic to say otherwise.”

At the same time, they claimed they have acknowledged David’s “pan identity.”

A friendly reminder that pan is one of numerous labels some individuals use to describe bisexuality. Anybody whose attraction is not limited to one sex fits the scientific definition of bisexuality. It’s both anti-scientific and biphobic to say otherwise.https://t.co/Vi5zY9eVuE

The article acknowledges David’s pan identity. Sadly, some people chose to attack us based on false assumptions made without reading it. It is our policy to ban people for confrontational behavior, especially if engaged in spreading anti-scientific, biphobic misinformation.

While pansexual is considered part of the bi+ umbrella of people attracted to more than one gender (as Bi.org itself refers to it), the website claims that pansexual is a term used by people who wish to put “a political emphasis on nonbinary gender identities,” which many pan people say as inaccurate.

Pansexuality is an often misunderstood identity that refers to attraction to others regardless of their gender.

Many people have identified as pansexual for decades. For example, pansexual writer Lana Peswani wrote in Cosmopolitan that “Pansexuals ‘don’t see gender’” and that “Gender is just not a thing that comes into it at all for me as this overall ‘picture’ of the person is what creates the attraction…. My brain just does not divide people up into categories.”

Entertainer Miley Cyrus, who identifies as pansexual, has explicitly rejected the bisexual label because she felt that’s “putting me in a box,” and she also said about sexual partners in 2016, “I don’t ever think about someone being a boy or someone being a girl.”

Actor Bella Thorne came out in 2019, saying, “I realized recently I’m actually pansexual and I didn’t know that.”

To her, the difference is, “You like beings. You like what you like. Doesn’t have to be a girl or a guy or a he, a she, a they, or this, or that. It’s literally, you like personality. You just like a being.”