If you’ve ever wondered “What is pansexual?”, “What does it mean to be pansexual?” or “What is the difference between pansexual and bisexual?” then you’re reading the right article!

Not only will we define pansexual with a clear-cut pansexual definition, we’ll also explain the colors of the pansexual flag, teach you a few things about the pansexual community, mention a few famous pansexual celebrities, and provide a pansexual test to help you think more deeply about your own concepts of gender-based attraction.

Define pansexual: What is pansexual? What does pansexual mean?

Are you confused about how to define pansexual? Do you ever ask, “What is pansexual?” or “What does it mean to be pansexual?” If so, don’t sweat it: We’ve got your clear-cut pansexual definition right here.

In other words, pansexual people say gender and sex aren’t determining factors in whether they feel sexually attracted to someone. As such they reject the gender binary (the idea that everyone only identifies either as “male” or “female”).

Sometimes people use the words “pansexual” and “omnisexual” as interchangeable synonyms since pan- and omni- are Greek and Latin prefixes respectively meaning “all.” As such, the pansexual definition fits both words.

If you’re wondering what’s the difference between pansexual and bisexual, we’ll answer that in the next section. For now, let’s clear up a few common misconceptions.

Like many folks, pansexuals experience sexual attraction to and sexual behavior with others based on a combination of physical, emotional, social, sexual, economic, intellectual and other factors and desires. Some pansexuals might desire sex with lots of people, multiple intimate partners, or “anything goes” sex, but one shouldn’t assume that all pansexuals do — it’s better to just politely ask instead.

Just because pansexuals can feel attracted to people regardless of their gender — sometimes using the slogan “Hearts, not parts!” — it’s important to note that pansexuals aren’t dismissive of gender altogether. Many recognize gender as an important part of their own and other people’s lives.

Lastly, it’s important to understand that pansexuality is different from “pansexualism,” an early 20th-century psychological theory that all human activity (mental and physical) is based on sexuality.

What is the difference between pansexual and bisexual?

It’s important to note that the difference between pansexual and bisexual is a point of continued debate in both communities. How you define pansexual can also depend on your understanding of the word.

Basically, there are two sides: One side thinks there’s no difference between pansexual and bisexual — they’re synonyms that provide additional labels people might feel more comfortable self-applying. The other side thinks “pansexual” is a more inclusive term that implies an attraction to a larger variety of genders than “bisexual.”

Since “bi” is a Latin prefix meaning “two” — as in bicycle (two-wheeled) and biannual (every two years) — some people think bisexuality, and the synonymous word “ambisexuality,” implies an attraction to only two genders: male and female.

This very literal definition of bisexuality seemingly reinforces the gender binary, the belief that all people are either male or female. And as such, the gender binary excludes people who identify as something other than male or female, including androgynous, agender, bigender, gender-neutral, gender-fluid, and non-binary people.

This looser definition means a bi person could be attracted to anyone regardless of gender, and thus views bisexuality as no different from pansexuality, omnisexuality, or any other types of queer, fluid, or undefined sexualities. Some bisexual activists even abbreviate bi as “Bi+” to acknowledge attraction to people outside of the binary.

Even so, some pansexuals still call themselves “bisexual” because more people have heard of bisexuality and because the label allows them to demonstrate that bisexuals can be attracted to more than just self-identified men and women.

Sexually fluid actor Nico Tortella says he sees the “bisexual” label as respectful to early sexual liberationists. “The B existed far longer than the P ever did in the acronym, and there’s something to be said about that. There’s something to be said about standing up for the mothers and fathers of the community who fought for [our rights to embrace a queer identity].”

So while a hypothetical bisexual might say, “I am attracted to men and women, but not non-binary people,” a pansexual wouldn’t likely say that because they don’t necessarily discriminate on the basis of gender.

Pansexual Cosmopolitan writer Lana Peswani explains, “Pansexuals ‘don’t see gender’ … I, personally, get drawn in by a person’s ‘vibes’ and the ‘feel’ I get from them as a being. A person’s energy … [their] overall beauty … Gender is just not a thing that comes into it at all for me as this overall ‘picture’ of the person is what creates the attraction…. My brain just does not divide people up into categories.”

No matter the difference between pansexual and bisexual, it’s important to recognize both labels as valid and beneficial to those who wish to apply them to themselves.

The pansexual flag: its colors and meanings

Is there a pansexual test that can tell me if I’m pansexual?

However, here are some questions to help you understand your own concepts of gender-based attraction. While they’re not exactly a “pansexual test,” you may still find them useful.

Remember: You don’t need to take a pansexual test or apply any label to your sexuality if it doesn’t feel right. It’s okay to identify as pansexual at one point and as something else later on. The labels you choose for your sexuality and identity should empower you and make you feel proud, even if you choose not to have a label at all. 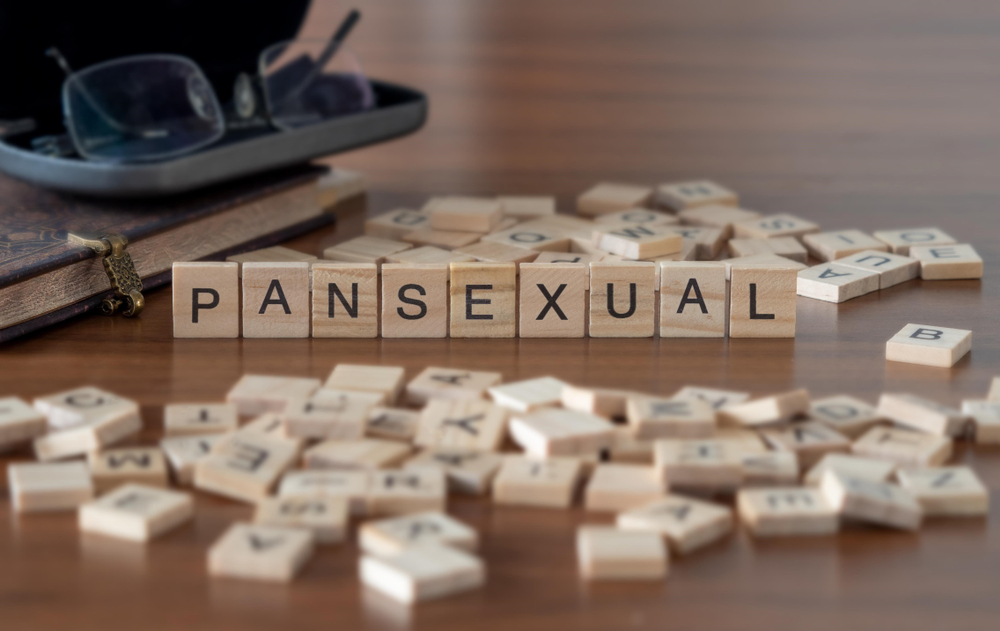 What’s a pansexual? What does it mean to be pansexual? How do you define pansexual? The answers to those questions might vary wildly depending on which pansexual person you ask. But here are some numbers and facts about the pansexual community that could give you a better idea.

The Human Rights Campaign’s (HRC) 2017 LGBTQ Teen Survey of over 12,000 young between the ages of 13 and 17 found that approximately 14% identified as pansexual, more than doubling the percentage of self-described pansexuals from HRC’s 2012 survey. Comparatively, 34% of the 2017 survey’s respondents identified as bisexual.

Pansexuals and panromantics — that is, people who can experience emotional attraction to others regardless of their gender — observe Pansexual Visibility Day (or Pan Visibility Day) on May 24. During this time, you’re likely to see the pansexual flag at LGBTQ-allied places or on social media.

As for the so-called “pansexual agenda,” their political goals include normalizing pansexuality, increasing pan visibility, and combatting anti-pan stigma by encouraging pan individuals and celebrities to publicly come out. Because many straight and queer people dismiss pansexuality as a “modern fad” or “attention-seeking,” the pan community wants acceptance and acknowledgment of their sexuality as a valid and authentic identity.

Related: The asexual agenda & everything else you’ve wanted to know about the asexual community

Beyond this, individual aims in the pansexual agenda sometimes overlap with different aims of the queer, polyamorous, and asexual communities. Chief among them is the right to express one’s gender identity and to have a partner or partners of any gender without facing institutional discrimination for it.

Who are famous pansexual celebrities?

There are several pansexual celebrities who you may know.

Non-binary Orange Is The New Black actor Asia Kate Dillon discussed their pansexuality in a 2017 interview.

There are a few fictional pansexual celebrities too. Jack Harkness from Doctor Who and its spinoff Torchwood (played by out gay actor John Barrowman) is a pansexual known for his many romantic and sexual conquests across the galaxy. Rick from the animated sci-fi show Rick and Morty is pansexual; he has slept with several aliens and once dated a hive-mind entity named Unity who could control the minds of differently gendered people.