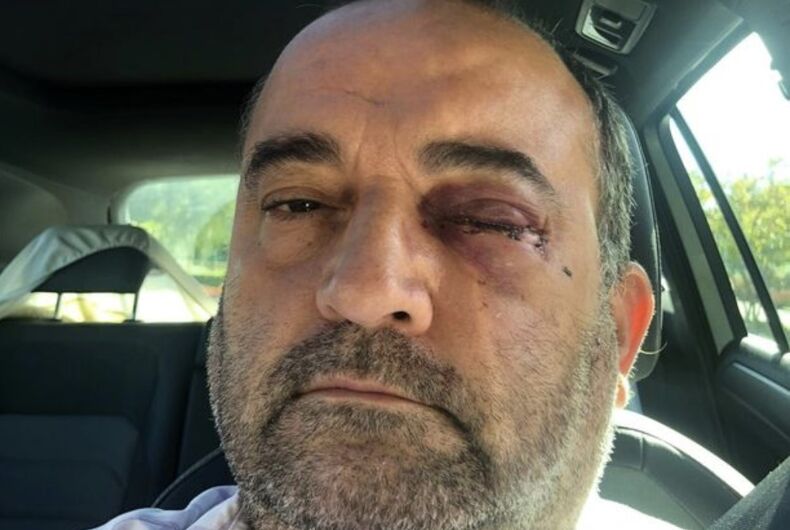 A gay man could lose his eyesight after he was brutally attacked in what he believes was an anti-gay hate crime.

At around 2 a.m. on September 30, Matt Brooks, 52, was winding down from his evening in the Gay Village of Birmingham, U.K. He had stopped for a snack at the restaurant Urban Kitchen and was outside leaning against the window when a man abruptly approached him. The man punched Brooks in the face with such force that he was rendered unconscious. He then fled the scene.

“It was completely unprovoked and went straight for me. I have no real memory of it,” Brooks told Birmingham Live.

“He just hit me and did a runner. It wasn’t a fight. It was a proper punch.”

Two people walking by, one of whom was an off-duty fireman, found Brooks and assisted him in getting help.

Brooks suffered a fractured eye socket and needed “emergency surgery to stop me going blind because of the pressure in the eyeball.” Doctors are working to relieve pressure on the injured eye, but it is still unclear whether he will keep his vision.

“If it had lasted any longer I would have gone blind already, but there is still a chance that will happen.”

The attack occurred only a few days after Birmingham celebrated Pride.

Brooks believes it is “more than likely” that the attack was a hate crime. “It’s in the area and it’s kicking out time. I could have stood out as an easy target.”

It is also the fourth time in a little more than a year that he has been assaulted.

Brooks has been frustrated with the police response. Despite the fact that his friends quickly reported the attack to the police in West Midlands, which encompasses Birmingham, he said it took several days for officers to respond. He continuously attempted to get the police on the phone, and when he finally got through, they told him it could be a couple days before someone was assigned to his case.

“I feel let down and disappointed,” he said, adding that his attacker needs to be found before he hurts somebody else. “My boss believes he employed him at a different workplace and said he had beaten up a guy with a belt.”

On Sunday, a West Midlands Police spokesperson said they had begun their investigation.

“Hostility and prejudice towards people because of their race, sexual orientation, disability, faith, age or gender is a hate crime,” they said. “And, like all hate crimes, we will investigate and pursue offenders with vigor.”

The last few months have seen several anti-LGBTQ attacks in the Gay Village of Birmingham. In June, a gay couple was left bloody and wounded after being assaulted with knives, and in August, two men in their thirties were attacked with bottles outside of a bar. In September, a 26-year-old woman was subject to a vicious assault.

After Brooks’s attack, Police and Crime Commissioner Simon Foster told Birmingham Live that this string of anti-LGBTQ hate crimes is “disgraceful,” adding that police will do everything they can to prevent future attacks.

“Tackling hate crime is a top priority,” Foster said. “It is important that we encourage and facilitate reporting, hold perpetrators to account and ensure that the right support is available at the right time for victims.”