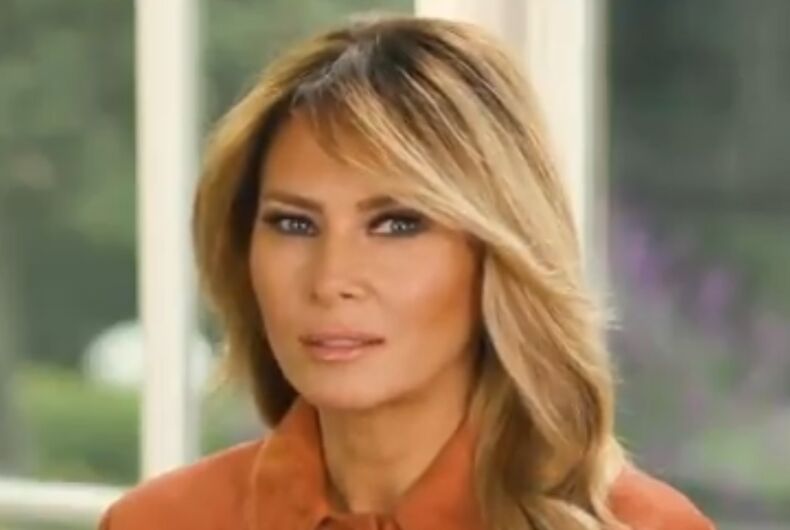 A former top White House staffer is accusing the Trump administration of firing a gay employee who worked for Melania Trump because he used Grindr and that was “personally embarrassing to Mrs. Trump.”

Stephanie Grisham was the White House press secretary for almost a year before she was assigned to work for Melania Trump as her chief of staff and press secretary, and she has a new tell-all book about her time in the Trump administration entitled I’ll Take Your Questions Now: What I Saw in the Trump White House.

Related: Melania Trump is “shocked” some people think her husband is anti-gay

In the book, she wrote that White House Chief of Staff John Kelly in early 2018 fired several staffers after revamping the security clearance process.

One of those staffers was a close friend of hers who is a gay man. She said that the man, who she did not name, had worked for the White House for “more than three years” but “was walked out of the White House by a woman from Human Resources, followed by an armed Secret Service agent, and not given a second thought.”

Grisham later found out that he was fired because he used Grindr. She wrote that the new security clearance process involved going through employees’ phones, and that’s how the Trump administration found out about the gay staffer’s online activities.

“Whoever determined security clearances had come across his Grindr account and decided that some of the stuff on it would be ‘personally embarrassing’ to Mrs. Trump,” Grisham wrote. She said that Kelly was a “control freak” and that the entire process was “frankly shitty.”

She wrote that she doesn’t know if Kelly himself made the decision to fire the gay staffer, “although he was the type of guy who liked top-to-bottom control, so it was certainly possible.”

“I do know that one of Kelly’s deputies was well aware of what had happened and supported the decision, something that enraged me on many levels.”

Grisham, who would work in the White House for several more years after the firing and frequently appear on Fox News to defend Donald Trump’s outlandish statements, said that the incident made her stop being friends with Kelly because “I just couldn’t get over that level of bias.”

She also wrote that Melania Trump got mad when she heard the gay staffer was fired but didn’t actually do anything about it.

“If she had really wanted the staff member back on her team, if she had been truly outraged, she could have done something. She didn’t.”

Grisham added that the White House at the time was “filled with adulterers,” so it was hypocritical to fire a staffer because he was gay.