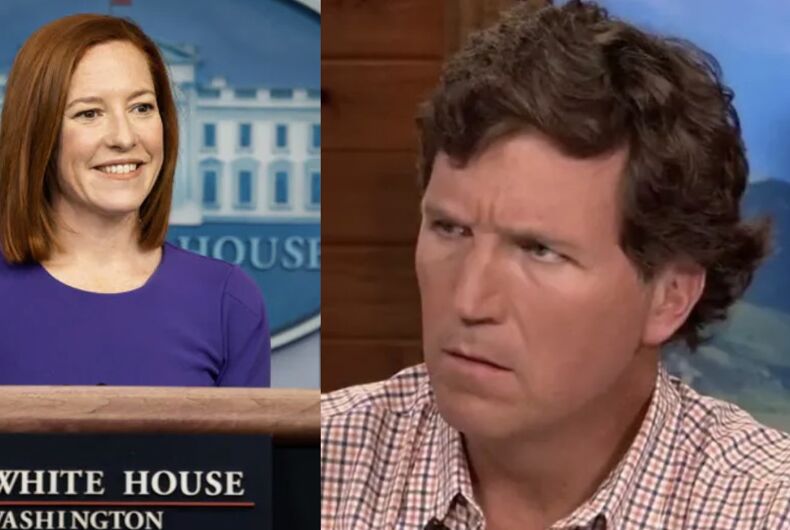 At yesterday’s White House press briefing, Psaki took several questions about Texas’s S.B. 8, a harsh ban on nearly all abortions that the Supreme Court refused to block. After a few serious questions, a male journalist tried to debate her about abortion, saying that President Joe Biden should “look out for the unborn child.”

She had to tell the reporter, “We have to move on, you’ve had plenty of time today,” as she tried to take questions because he wanted to continue to debate her.

Carlson – upset that Psaki centered a policy discussion around a group of people that doesn’t include Tucker Carlson – decided that he could “win” the debate by pointing out that transgender men can get pregnant too.

“She should know that men get pregnant now.” Carlson said on his show last night. “The science people tell us that every day. It’s on the cover of People magazine right now, a dude who’s pregnant.”

People did not have “a dude who’s pregnant” on its cover this week. Their cover story is instead about Prince Harry and Meghan Markle. Carlson may have seen pictures shared by People online of artwork made by Lil Nas X that showed him pregnant.

“Now what does that mean? It means that abortion is now a men’s issue. Men are child bearers, so men, dudes, have an equal right to choose to terminate their pregnancies, and they have a right to weigh in on the policy itself. It’s not a women’s issue anymore, Jen Psaki.”

While Carlson is correct to point out that there are people of all genders capable of getting pregnant – and that discussions of reproductive health should take transgender and non-binary people into account – he is making this argument in bad faith. Carlson has, for years, used his platform at Fox News to foment hatred against transgender people.

He has called transgender children “grotesque” and “disturbing” and said that they are a “nationwide epidemic.” He accused the CDC of keeping COVID-19 vaccines away from white people because a non-binary person works there. He called transgender people “satanic” because expressing one’s gender is “saying you’re God” if it doesn’t align with one’s sex assigned at birth.

Carlson suggested that the transgender population is booming out of control which is “a challenge to the perpetuation of the species.” At the time, his entire argument was based on the false assumption that trans people don’t have children, something that he is now angry that not everyone knows.

And he has called gender-neutral language – the exact thing he appeared to be advocating when discussing Psaki – “creepy” and agreed with his guest that it “den[ies] the very biological existence of women.”

Psaki, on the other hand, has repeatedly affirmed the Biden administration’s support for transgender rights, even answering pointed questions that claimed that transgender equality will harm cisgender people with “Trans rights are human rights.”

Moreover, Psaki’s point when she said that abortion is a women’s rights issue wasn’t that only women can get pregnant or that all women have children, but that attempts to ban abortion come from misogyny and are at least partly motivated by an attempt to control women.

And when she pointed out that the male conservative journalist has never been pregnant, there’s a good chance that she just knew that fact about him because she has worked near the White House press corps for months now.