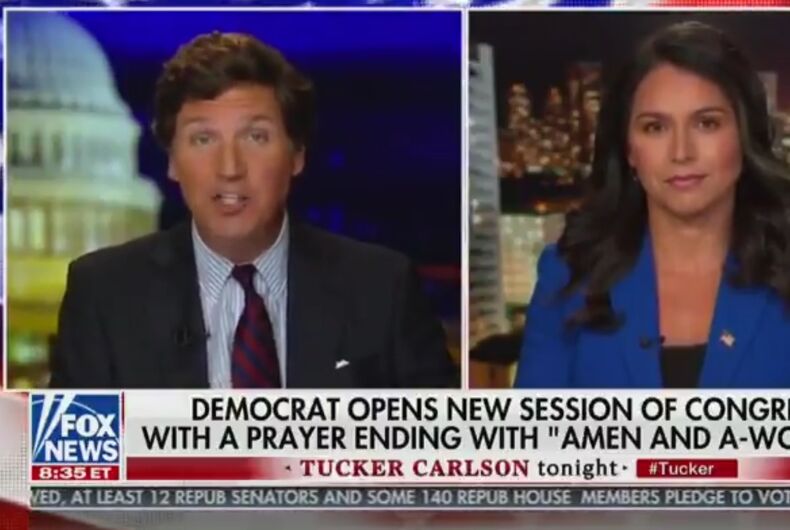 Former Rep. Tulsi Gabbard (D-HI) went on Tucker Carlson’s Fox News show to complain about gender-neutral language that the U.S. House will soon be using, like replacing “Chairman” and “Chairwoman” with “Chair.”

“It’s the height of hypocrisy for people who claim to be the champions of rights for women to deny the very biological existence of women,” Gabbard told Carlson.

Gabbard ran in the Democratic presidential primary in 2020 and faced strong criticism for her past work as an anti-LGBTQ activist, even working for an organization that supported conversion therapy.

Earlier this week, House Democrats voted in favor of a package of rules changes for the incoming Congress, and the new rules included several moves toward gender-neutral language. Words that signify gender like “mother” or “seamen” are to be replaced with words like “parent” and “seafarer,” and phrases like “himself or herself” will be replaced with “themself.”

Democratic leadership said that the changes made language more “inclusive, efficient, and accurate.” But Gabbard disagrees, and she went on Republican network FOX to complain about the language changes.

“How does it empower women to ban the acknowledgement that women exist?” Carlson asked.

It goes without saying that House Democrats did not ban the acknowledgement that women exist, but Gabbard was willing to run with that framing.

“It’s mind-blowing,” Gabbard said, “because it shows just how out-of-touch with reality and the struggles of everyday Americans people in Congress are.”

“Their first act as this new Congress could have been to make sure that elderly Americans are able to get the COVID vaccine now alongside frontline health care workers,” Gabbard continued.

Of course, the new session of Congress only started this week, rules changes for the new session are generally the first thing the new Congress does, and there’s nothing about using gender-neutral language that prevents elderly people from getting vaccinated against COVID-19.

Carlson went on to say that “the very people who claim to celebrate diversity, differences” are “trying to impose this creepy, corporate sameness.”

“I don’t know how to explain what they think,” Gabbard said, laughing. “And this is why Congressman Markwayne Mullin and I, we introduced my legislation, the Protect Women’s Sports Act,” which would ban transgender girls and women from school sports.

Tulsi Gabbard blasts the new House rules that get rid of "gendered language" on Tucker:

"It’s the height of hypocrisy for people who claim to be the champions of rights for women to deny the biological existence of women." pic.twitter.com/eoQEl1QNWR

Before Gabbard was elected to Congress, she worked for one of her father’s anti-LGBTQ organizations, the Alliance for Traditional Marriage, which she later cited as a positive experience when she ran for the state legislature in 2002.

During her presidential campaign, Gabbard refused to respond to an HRC questionnaire on LGBTQ issues that all the other major Democratic candidates responded to. Now that she has introduced an anti-transgender bill, though, it’s possible that she refused to respond to the questionnaire because she didn’t want to draw attention to her views on LGBTQ issues during the primary.

Gabbard lost the primary and endorsed Joe Biden, and she did not run for reelection for Congress.