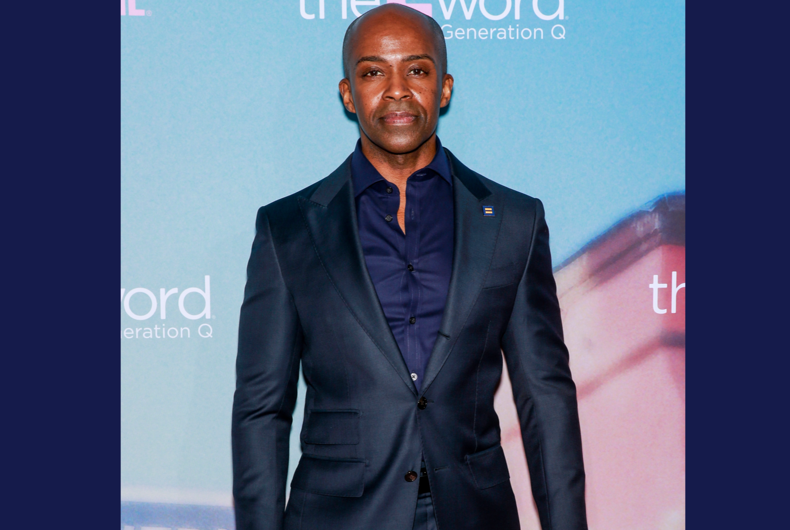 Alphonso David at the premiere of "The L Word: Generation Q" in 2019Photo: Ovidiu Hrubaru / Shutterstock.com

Alphonso David, the president of the Human Rights Campaign (HRC), has released a statement today accusing HRC’s board chair, Morgan Cox, and the HRC Foundation’s board chair, Jodie Patterson, of asking him to resign — although an investigation into him has cleared him of any wrongdoing, David claims.

It’s the latest turn in the saga between HRC and their own president, which itself stems from the investigation into former New York Gov. Andrew Cuomo (D), who resigned following accusations that Cuomo used his office and power to try and cover up allegations of sexual harassment.

David, a former Cuomo aide, is named extensively in New York Attorney General Letitia James’s report as a party to Cuomo’s alleged cover-up, even after he left Cuomo’s office in 2019. After expressing confidence in him, HRC eventually hired “an experienced outside law firm,” Sidley Austin LLP, to investigate David’s actions independently, although Sidley Austin has previously partnered with the organization.

In his new statement issued on social media, David alleges that Cox, Patterson, and others within HRC are trying to avoid releasing the investigation’s findings, but they still want him to step down. David said he is not resigning.

“I have spent my entire career speaking out for those who are left out and left behind,” David’s lengthy statement begins. He reiterates that he was “shocked and sick to my stomach” by AG James’s report.

David was not only named multiple times in James’s report following an investigation into Cuomo’s use of his office to respond to accusations of sexual harassment, but David was also named as an active participant, even after he stopped working for Cuomo.

Several of Cuomo’s administration officials of past and present were said to have “engaged in a flurry of communication” to try to suppress the allegations and smear Cuomo’s alleged victims publicly. James found that Cuomo violated state and federal law in retaliating against the women.

Cuomo has since resigned, leaving then Lt. Gov. Kathy Hochul (D) to take over as Governor for the remainder of his term. Cuomo remains under impeachment investigation from the New York State Assembly.

“I was also the one who called for HRC to conduct an independent review, and I participated in it fully,” David says in today’s statement. “I did this to answer any questions and ensure that there would be no ambiguity about my role or questions about my leadership. I was confident that the facts would speak for themselves: that I had a legal obligation to hand over a memo when the Governor’s office requested it, and that I in fact spoke out against the draft letter I was asked to sign.”

David claims that the report has been completed, but not formally issued, and he suggests a formal report may not exist.

“I have now been privately contacted by the two co-chairs of the HRC board and their representatives, who informed me verbally that the review period has been completed, and that there is no indication of wrongdoing on my part. Despite this, they told me that the results of the independent review will not be shared with anyone – not me, and not the HRC community. It isn’t even clear from our conversations that a formal report actually exists,” he says.

He also claims that the report exonerates him, but the board chairs want him to resign anyway.

“Despite the lack of any findings, the board co-chairs have now asked me to consider resigning, not because of any wrongdoing, but because they feel the incident has been a ‘distraction’ for the organization. They told me they reached this conclusion because they heard from two funders and a small handful of employees who expressed concern via email over the last several weeks,” David claims.

David himself called for his former boss should resign, but some LGBTQ advocates and elected officials — including those directly supported by David and HRC’s work — have also called on him to resign. Roberta Kaplan, the out president of women’s advocacy group Time’s Up, wsa also named in the investigation as someone working to defend Cuomo. She also resigned following James’s report.

Previously, out Michigan Attorney General Dana Nessel publicly said she “will not be accepting any campaign donations or support from HRC unless and until there is a new president of this organization.” Other LGBTQ advocates have made similar demands publicly, and HRC staff have asked that David resign at internal meetings due to the investigation.

David says that Cox and Patterson “told me they wanted to resolve the matter quietly during this holiday weekend leading up to the 30-day deadline for the review, hoping there would be less media interest during this time. I have the support of too many of our employees, board members, and stakeholders to walk away quietly into the night.

“I am not resigning,” David states. “The idea that this is a distraction is simply not right. I have not been distracted, nor have my HRC colleagues who are fighting for human rights.”

He goes on to say that if HRC continues to refuse releasing the report, “Keeping the review behind lock and key would be an injustice to me, and more importantly to our employees, supporters, and all members of the HRC community.”

He calls for “complete transparency in this matter” and thanks those who have supported him since the investigation began.

“I assure [supporters] that as a Black, gay man who has devoted his entire career to the fight for equality, I will never stop being a loud and proud voice for our community’s values. The co-chairs of the HRC board owe it to the entire organization we serve to complete this process with transparency and integrity,” he concludes.

The HRC Board, chairs Cox and Patterson, and the organization have yet to formally respond to David’s statement.

Still, David’s statement is a swift turn in the ongoing saga affecting the organization and David’s tenure as president. HRC proudly stood behind him when he was first named in the report, even stating they “have full confidence in Alphonso David as president of the organization” and announcing his five year contract extension at the same time, despite his alleged participation in a cover-up.

Instead of celebrating David and the extension of his tenure though, the pressure for David to step down has only grown.

David became the first person of color to lead the Human Rights Campaign, a storied organization, in 2019 — but the allegations against him have dredged up concerns with HRC’s past, with one former employer telling The 19th, “HRC faces a credibility crisis, yet again, which is really troubling, because I think that, it takes much longer to build credibility than it does to lose it.”

HRC has long been criticized for its lack of diversity and history of transgender exclusion, but David’s selection to head the group indicated that they were finally catching up to the challenges facing the modern queer movement outside of marriage equality.

Lindsay Boylan, one of Cuomo’s accusers, has responded. She is the former Cuomo staff member whose personnel file (or “dossier,” as she refers to it) was reportedly kept by David, even after he stopped working for Cuomo or the state of New York. David allegedly handed over the file to Cuomo’s top aide Melissa DeRosa after Boylan accused him of sexual harassment publicly. (DeRosa subsequently resigned following the report, but prior to Cuomo’s own resignation.)

“Alphonso David questions the veracity of a report having never read it & yet is able to say it finds him innocent of any wrongdoing in helping to smear me when I spoke publicly about the abusive monster we both worked for over a period of years,” Boylan said.

Just in from Alphonso David: “I am not resigning.”

David says he won’t resign even though he was asked by two members, who called the NY AG incident a distraction. https://t.co/RAE1HT8MfP

HRC needs to release the investigation. Why wouldn’t they? https://t.co/MbLFam6dXF

This is quite something https://t.co/0LACIUMe1I

BREAKING: @HRC head Alphonso David reveals that he has been cleared of wrongdoing for his connection to Andrew Cuomo's planned smear campaign. And yet the investigation's findings will be kept secret and David has been asked to quietly resign due to being a "distraction." https://t.co/DouJMm1zdQ

Alphonso David questions the veracity of a report having never read it & yet is able to say it finds him innocent of any wrongdoing in helping to smear me when I spoke publicly about the abusive monster we both worked for over a period of years.

What a time to be alive. https://t.co/VoStCgFvpX

I cannot wait to forget all about and never work with people like this again.

Think about how much @AlphonsoDavid could have distinguished himself as a leader had he taken any responsibility.

Had he simply told the truth about our boss.

Had he honored where he fell short in an abusive & scary environment for all.

Honestly I’d forgive him & move on.