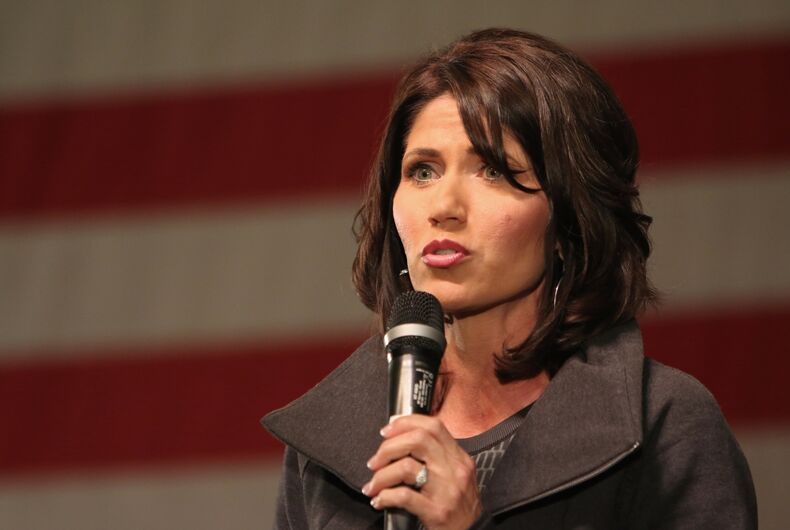 Details about the spending habits of South Dakota Gov. Kristi Noem (R) are coming out, and she is under scrutiny for her purchase of furniture produced directly from prison labor, altered to her specifications, and paid for at a discounted price.

Another one of her recent purchases that didn’t rely on direct prison labor have also come to light. Noem went out of her way to commission a custom-crafted mini Mount Rushmore sculpture, gifted to former President Donald Trump last summer when Trump came to the monument, that included Trump’s head alongside the four presidents that are actually carved into the sacred Lakota Sioux land.

Related: White House claims Donald Trump is “the most masculine” president ever

The gift was presented right around the time Trump allegedly made attempts to get himself etched on the actual Mount Rushmore, even reportedly asking Noem about the matter, although it’s not in her power to make changes to the national monument. He made numerous tweets hinting at it, including one of a photo edited onto it.

Noem’s previously said that Trump asked her about it when they first met in 2018, when she was a Congresswoman. He even told her it was his “dream.”

The Daily Beast tracked down the artists behind the model, as well as the person that connected Noem to them after learning more about Noem’s purchase through disclosure filings with the Office of Government Ethics. The gift was first reported in August, but had never been seen before now.

Seen for the first time ever: The sculpture Trump lapdog, South Dakota Governor Kristi Noem, gave to Trump with his likeness added to Mount Rushmore. It’s 27 inches wide, 12 inches tall. Nice he has it since no real monument or statue will ever honor Trump. (Photo: Tom Lawrence) pic.twitter.com/B948ssf4Qw

Like Trump did at his last visit to Mt. Rushmore, Leuning and Treeby denounced people who criticize the existence of the actual monument or the figures featured on it. “There’s not one iota of racism in it,” Leuning said.

They weren’t invited to the event where Trump spoke, let alone to present the sculpture to Trump themselves, which Noem did herself when Trump came to Mt. Rushmore to mark Independence Day in 2020. “We were told he loved it,” Leuning remarked.

They were instructed not to speak publicly about making the gift.

Still, Leuning and Treeby said they hope to vote for Trump in 2024, but they’re also willing to consider Noem “and that Florida guy,” Leuning said, in reference to Florida Gov. Ron DeSantis (R).

Gov. Noem has tried to gain popularity by copying Trump’s agenda as leader of South Dakota, and this year she adopted Trump’s position against the inclusion of trans girls and women in sports. Noem tried to get a ban on trans girls and women in sports enacted by legislation, but she refused to sign what Republicans in the state legislature passed, and instead enacted a ban herself by signing two executive orders.

The attempt to gain popularity with the anti-trans legislation backfired, and instead conservatives attacked her as selfish and her orders as weak or insufficient, and her popularity has sharply declined on the right since.

Tucker Carlson accused her of trying to “cave to the NCAA” because she feared the organization would remove sporting events depending on the type of anti-trans sports ban enacted in the state. The NCAA has not done so, despite previously pledging to do so.

She’s also attacked Lil Nas X for trying to sell his “Satan shoes,” claiming he was out to threaten to children’s “God-given eternal soul.”

Regarding her past attempt to please Trump, Noem’s office simply said in a comment to the Daily Beast that “[Governor Noem’s] philosophy towards giving gifts is to always give the person something that they’ll appreciate.” They also insisted they didn’t use any taxpayer money for it, unlike the purchase of her custom-made desk, which allegedly did.

Trump was only given one of the sculptures. Two undisclosed donors who Noem’s office says paid for the gift to be made received the other two, and the sculptures have not been seen since.

South Dakota Gov. Kristi Noem added Donald Trump to a replica of Mount Rushmore that she commissioned and then presented when he delivered a speech at a controversial Mount Rushmore celebration last July.

It’s never been seen before. Until now. https://t.co/59LlM2WXEu

Trump Fan-Girl Kristi Noem had this God awful replica made for TFG.

Not only has @GovKristiNoem disgraced Mt. Rushmore, but she's disgraced and embarrassed herself. pic.twitter.com/VFQ9zcS5Er