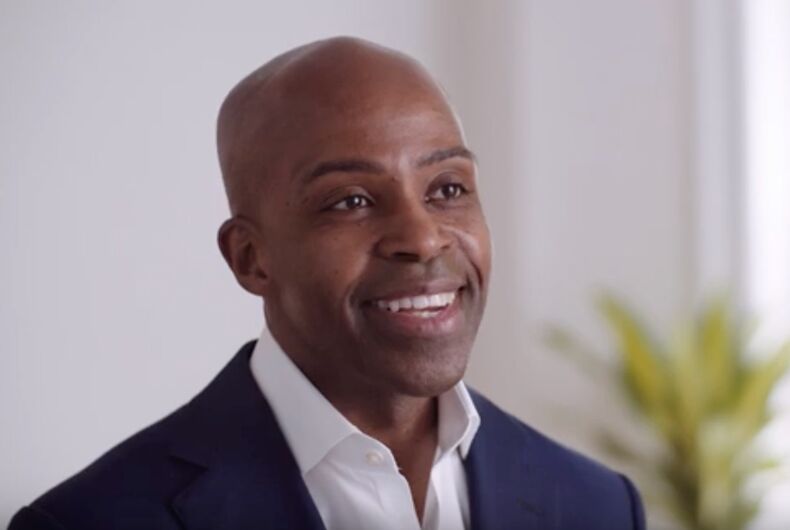 The board chairs of the Human Rights Campaign (HRC) and the accompanying HRC Foundation have confirmed that they are launching an investigation into HRC President Alphonso David over his role in the scandal surrounding sexual harassment allegations against New York Gov. Andrew Cuomo (D).

After the information initially came to light, HRC’s board expressed “full confidence” in their leader. Now, based on reports of the fallout within the organization, the confidence has begun to falter.

Morgan Cox and Jodie Patterson, board chairs for HRC and the HRC Foundation, respectively, said in a statement today that they find “Alphonso David’s inclusion in the New York State Attorney General’s report” regarding Cuomo to be “very concerning.”

“At the direction of the Boards, HRC has retained an experienced outside law firm (Sidley Austin LLP) to conduct an internal investigation. Sidley Austin will report only to and work at the direction of the Boards of Directors in conducting a thorough investigation,” Cox and Patterson said. “The investigation will include consideration of whether Alphonso David’s actions aligned with HRC’s mission and values, as well as with professional and ethics standards.”

David has already pledged to cooperate and released his own statement noting he “fully endorses” Cox and Patterson’s decision.

Last week was David’s official two year anniversary as the president of the nation’s largest LGBTQ advocacy organization, and HRC was hoping to announce his five-year extension to much fanfare. Then, on August 3, James reported the findings of her office’s independent investigation into the accusations from 11 women that Gov. Cuomo sexually harassed and assaulted them.

David, a former employee of Cuomo’s, was not only named multiple times in a report following an investigation by New York Attorney General Letitia James, but he was also named as an active participant. Several of Cuomo’s administration officials of past and present were said to have “engaged in a flurry of communication” to try to suppress the allegations and smear Cuomo’s alleged victims publicly.

David himself has said that his former boss should resign, but some LGBTQ advocates and elected officials — including those directly supported by David and HRC’s work — have also called on him to resign.

As the news came out, HRC said they “have full confidence in Alphonso David as president of the organization” and announced his five year contract extension anyway. Instead of celebrating David and the extension of his tenure though, the pressure for David to step down is growing.

Out Michigan Attorney General Dana Nessel said she “will not be accepting any campaign donations or support from @HRC unless and until there is a new president of this organization.” Several other LGBTQ advocates have made similar demands.

David has denied any wrongdoing on his part. Last week, he sent an email to HRC’s board that the accusations against Cuomo “are beyond comprehension to me and they break my heart as a former employee,” but justified his actions as necessary as former counsel to the governor’s office.

He then told the Washington Blade he had no intentions to resign.

Still, the 19th reports that more than a dozen current and former HRC employees that spoke to the publication are dismayed by what’s unfolding.

“He’s missing the larger context outside his actions, which is what people are really upset about,” one current HRC employee said to the 19th. “He didn’t sign the letter but he helped review, edit and give guidance on it.”

Another said, “I think it’s inappropriate that Alphonso would be using his HRC email to further muddy the waters of this investigation,” and said David should be placed on a leave of absence while the investigation continues.

In his statement today, David said “Multiple inaccuracies have been circulating and therefore this definitive review is important” and he reiterated that he had no knowledge of any of Cuomo’s alleged behavior.

He said that Cuomo’s staff “tried to use me, as they have used countless others.”

Please read a note that I shared earlier with the Board and the staff of HRC. pic.twitter.com/p4ioiSVSzH

That contradicts James’s report, which found that David played a role in Cuomo’s campaign to discredit the women, keeping a personnel file on Lindsey Boylan, who accused the governor of forcibly kissing her when she was an advisor to him.

The report also said that Cuomo commented on her looks, compared her to an ex-girlfriend, touched her in various inappropriate places on her body, and made sexual comments like “let’s play strip poker” when she was on a plane with him.

Cuomo aide Melissa DeRosa allegedly told David to keep a file on her and that he gathered information about her in the file, including confidential documents. He even kept documents related to counseling on workplace conflicts that had nothing to do with Cuomo, as well as a document that said that she voluntarily resigned in 2018 after she first accused Cuomo.

The report says that David helped DeRosa track down part of the file in late 2020, after Boylan had gone public with her accusations against Cuomo. David allegedly sent confidential documents to Cuomo senior adviser Richard Azzopardi. At this time, David was already the president of HRC and no longer worked for Cuomo.

David told investigators that he kept the files since it was the only time he “was actually involved in a counseling of an employee.”

Azzopardi then allegedly sent the confidential files to the AP, the New York Times, and the New York Post, along with a note that “there is simply no truth to these claims,” referring to Boylan’s accusations.

The report also says that David tried to find people to sign a draft op-ed to discredit Boylan. He did not sign the op-ed himself and it was never published.

The controversy has dredged up past issues at HRC, with a former employee telling the 19th, “HRC faces a credibility crisis, yet again, which is really troubling, because I think that, it takes much longer to build credibility than it does to lose it.”

David worked at Lambda Legal before he began working in the New York State government in 2007, becoming Cuomo’s main lawyer followed by the head of New York’s Office of Civil Rights. He worked to make New York just the sixth state to legalize same-sex marriage, among other advancements in LGBTQ equality under Cuomo’s tenure.

David was a rumored replacement for former New York Attorney General Eric Schneiderman who also resigned in disgrace in 2018. In 2019, he became the first person of color to lead the Human Rights Campaign.