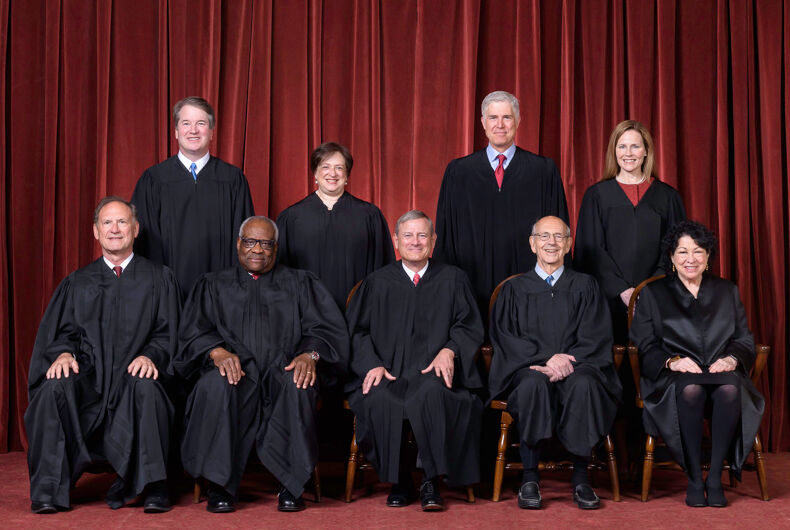 The five right-wing justices of the Supreme Court who decided to uphold Texas’s anti-abortion law last week are sending a strong signal about the shaky future of LGBTQ rights, including marriage equality.

Samuel Alito, Amy Coney Barrett, Neil Gorsuch, Brett Kavanaugh and Clarence Thomas cleared the way for a new law in Texas — which bans abortions after six weeks — to take effect, with just a single paragraph. The five justices clearly had an ideological goal in mind, and they weren’t about to let legal niceties such a court hearing stand in the way.

By allowing the Texas law to take effect, the justices essentially threw out any regard for precedent overnight. Roe v. Wade, the 50-year-old Supreme Court ruling that legalized abortion, simply didn’t matter.

Nor did some of the most bizarre, extreme elements of Texas’s law, which allows private citizens to earn $10,000 for ratting on anyone who even so much as counsels a woman to have an abortion.

Chief Justice John Roberts, who used to be considered conservative, recognized how much the majority’s decision upended legal procedures, and couldn’t go along with it.

“We are asked to resolve these novel questions… in the course of two days, without the benefit of consideration by the District Court or Court of Appeals,” he wrote in his dissent. “We are also asked to do so without ordinary merits briefing and without oral argument.” (Roberts might well have voted to uphold the Texas law if the legal challenge went through normal channels.)

Abortion rights have long been in the sights of conservatives who want to ban pregnant people’s right to choose entirely. Over the decades, the right has eaten away at the right, adding new restrictions that could somehow muster pass a court without violating the binding precedent set by Roe v. Wade.

Guess what else conservatives would like to see overturned? Obergefell v. Hodges, the Supreme Court ruling that legalized marriage equality.

Except that Alito and Thomas have made it abundantly clear that they think Obergefell was wrongly decided. In a decision last year involving Kim Davis, the Kentucky clerk who refused to give same-sex couples a marriage license, Thomas said so, point blank.

“By choosing to privilege a novel constitutional right over the religious liberty interests explicitly protected in the First Amendment, and by doing so undemocratically, the Court has created a problem that only it can fix,” wrote Thomas in an opinion joined by Alito. “Until then, Obergefell will continue to have ‘ruinous consequences for religious liberty.’”

There’s every reason to believe that Barrett, with her ultra-conservative background and previous anti-LGBTQ history, shares that sentiment.

Indeed, the Federalist Society, the anti-LGBTQ group that Donald Trump outsourced judicial appointments to has consistently claimed that Obergefell was wrong decided. The group has promoted the idea that marriage equality is, as one of its writers put it, “a legal and cultural mistake.”

The Federalist Society sets the litmus test for judicial appointees on the right. What it says isn’t just an opinion. It’s the template that its adherents are meant to follow.

When Barrett was nominated for the Supreme Court last year, the Federalist Society proclaimed that she wasn’t the threat to Obergefell, but instead, the Constitution is.

“This is a situation the LGBT left has placed itself in,” Chad Felix Greene, the out senior contributor to the group’s publication, insisted in a column. “By forcing the issue through an activist Supreme Court that fabricated a ‘right’ through creative interpretation of the law, they have made themselves vulnerable to new justices recognizing this flaw as unconstitutional. The decision should have been left up to the states.”

As their ruling on Texas’s abortion law shows, the five extremists on the Court don’t care about precedent, nor do they don’t care about public opinion. (More than half of Americans say abortion should be legal in all or most cases.) They care about ideology. So what if most Americans think marriage equality is a good thing? If five justices on the Supreme Court think otherwise, that right could be gone in a flash.

Out American athletes are bringing home 5 medals from the Paralympics