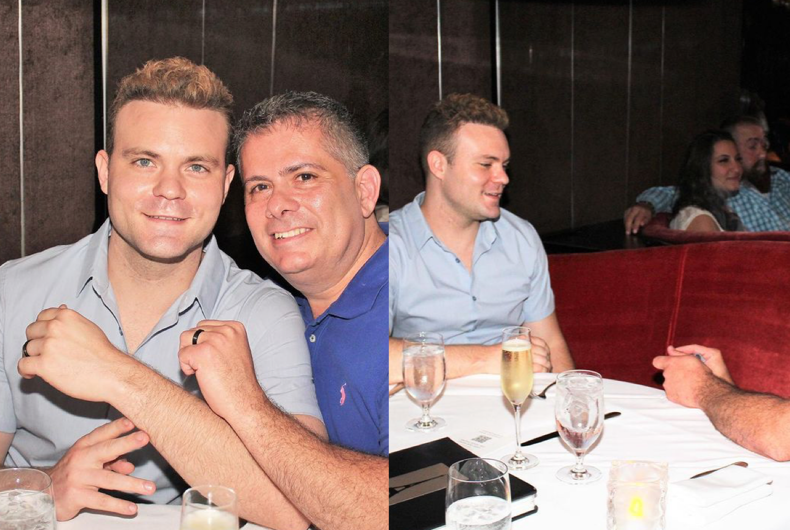 Erik Braverman, the Senior Vice President of Marketing Communications and Broadcasting for the Los Angeles Dodgers baseball team, has announced he’s added another ring to his collection: an engagement ring.

Braverman shared on social media that he is going to marry his partner, Jonathan Cottrell. The out baseball executive popped the question this weekend in Las Vegas to the engineer-model-photographer, who happily reports that he said yes.

Related: A Dodgers player did the ‘bend & snap’. Gay Twitter is shook.

Among other things, Braverman has shepherded the Dodgers’ long-celebrated Pride Night, which just held its eighth edition in June when the Dodgers hosted the Texas Rangers, who this year became the only team in Major League Baseball not to have ever held a Pride Night celebration.

Braverman came out publicly in 2015, although he was out to those close to him and those around baseball for years prior. His promotion to Senior Vice President in 2018 made him one of the most senior out executives in not only all of baseball, but professional sports around the country.

Braverman told Outsports in 2018, “My passions growing up were always baseball, broadcasting, business and marketing. This is a job that literally combines all of my passions with all of my skills, with everything I’ve learned and practiced in my career. In this job they all came together in one great opportunity, and that’s what’s made it so enjoyable for me.”

Braverman has helped the development of the Dodgers’ reputation as an ally to the LGBTQ community in stark difference with some of the storied franchise’s past. It was a Dodgers player, Glenn Burke, who created the high-five by smacking the hand of teammate Dusty Baker in 1977.

Burke was not only gay, but out to his teammates in the 1970s, considered one of the earliest professional LGBTQ athletes to ever come out publicly in America. Then-manager of the Dodgers, Tommy Lasorda Sr., soured on Burke after he turned down a team offer for an all-expense-paid honeymoon if he married a woman.

Burke also had a relationship with his son, Tom Jr., known as “Spunky.” (The elder Lasorda denied his son was gay to the end of his life, even after his son died of complications from AIDS in 1991.)

Lasorda would trade Burke to the Oakland A’s, against his team and dugout’s wishes, in 1980. A year before he died of AIDS-related complications in 1995, Burke reflected on his baseball career to the New York Times by saying, “Prejudice drove me out of baseball sooner than I should have. But I wasn’t changing.”

Now, the Dodgers are not only proud of their LGBTQ employees, but have actively become one of the most LGBTQ-affirming teams in men’s sports.

Thanks to Cyd, Jim, Dawn and the entire @outsports community for your messages. I proudly held the Commissioner's Trophy up in my Dodgers LGBTQ+ Pride jersey. We have come a long way. I hope to do it again! #WorldSeries #Dodgers #equality https://t.co/5u1l2BGdAI

Braverman has worked for the Dodgers for 12 seasons, taking part in marketing a team that has earned eight straight division titles, three National League championship pennants and trips to the World Series, and one World Series championship title at the end of the 2020 season.

He also enjoys a longtime working relationship with Magic Johnson, now a part-owner of the Dodgers, who came out as living with HIV in 1991. Braverman helped Johnson navigate his publicity after the revelation, as well as the coming out of his son, E.J. Johnson.

LGBTQ+ Pride Night at Dodger Stadium would not be the same without the support and friendship of @BillieJeanKing and Ilana Kloss! Jonathan Cottrell is my ❤️ towering over us all! pic.twitter.com/hMiniPd8X2

A native of Houston, Texas, the Dodgers VP has “set the standard for fan engagement and grown to become one of the most followed teams in baseball across all platforms.”

Cottrell is an engineer formerly working for Google. He was born in France and graduated from McGill University in Montreal, Quebec.

Currently, he is the Head of Engineering for the streaming mobile application Loop. He also does professional modeling and photography, which has helped him maintain some popularity on Instagram.

Mary Trump rips Meghan McCain for being a disrespectful “coward”