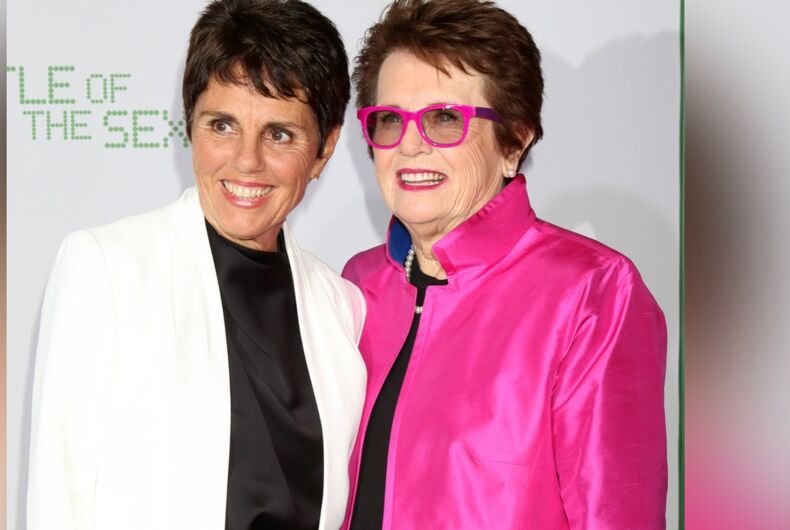 Ilana Kloss (left) and Billie Jean King (right) at the "Battle of the Sexes" Premiere at the Village Theater on September 16, 2017 in Westwood, CAPhoto: Kathy Hutchins / Shutterstock

Although she helped to advance LGBTQ rights for decades and fought for marriage equality for years, Billie Jean King resisted marriage herself. She turned down an offer from Elton John to sing at the wedding. She didn’t do it after John McEnroe’s pushed her to do it in Las Vegas.

But King is now revealing that eventually, she did in fact decide to get married. In fact, she and her partner of 42 years, Ilana Kloss, did it about three years ago. No one knew about it — other than the former mayor of New York that officiated it, his wife, an “aide” that witnessed it, and the city employee who issued their license.

Related: Watching Elton John pretend to get a COVID vaccine will leave you ready to get pricked

King tied the knot with Kloss on October 18, 2018, but she’s only revealing it publicly now in her memoir, All-In, and with an interview in People Magazine. Family and friends only found out when they received advanced copies of All-In, which goes on sale on August 17.

“Nobody threw rice or smashed wedding cake in the other’s face,” An excerpt of the book reads. “One of the brides wore jeans and a lovely red scarf and the other had on a black shirt, a comfortable warm‑up suit, and pearls — ha! — a personal touch of glamour that Ilana still teases me about.”

King did it because, as she writes in All-In, “Years from now, I never want anyone to question how much I was committed to you.”

For Kloss, this was something they could have just between them. “So much of our life has been public, keeping this private was something special we could hold on to, just for us,” King says her wife has told a friend after they learned about it.

King also shared their only “wedding” photo with People, posing with former New York City mayor David Dinkins and his wife, Joyce. Dinkins officiated the wedding in his home, with his aide as the witness. Mayor Dinkins passed away on November 23, 2020, just a month after Joyce on October 10.

Although she advocated for marriage equality for years, especially in her native California, King didn’t immediately plan to do it after it was achieved nationwide in 2015.

“Elton [John] had run to the altar with David Furnish soon after same-sex marriage was legalized in the U.K., and he started nudging Ilana and me to consider it,” King writes. “He even offered to sing at our wedding if we’d take the plunge.”

John wasn’t the only one pushing her to do it. King recalls that fellow tennis champion “John McEnroe saw me at Elton’s Smash Hit fund-raiser in Las Vegas and needled me: ‘C’mon, Billie Jean! Why not get married? Wrap it up and put a bow on it already!'”

She writes in the book, “Ilana and I already considered ourselves partners for life. We had worn each other’s rings for years. Why change anything?”

But they decided to finally do it after considering how much they went through to achieve marriage equality. “We recognized that so many people had worked so hard to get the laws changed to give us the choice. Emotionally, we had arrived at a place where it became important to us to formalize our love for each other,” King writes.

“In the fall of 2018, Ilana and I called our good friend David Dinkins… and told him we were ready to take him up on an offer he’d been making to us for years: ‘If you ever get married, I’m your guy!'”

What was causing King’s hesitation? Besides her history with the institution of marriage, it was “a big problem with trusting.”

“I felt very married to Ilana, whether I had a piece of paper or not,” King said in her interview with People, “but I’d had a big problem with trusting and it meant a lot to show my trust in Ilana.”

The couple has been together for 42 years, pre-dating King’s outing in 1981 following a “palimony” lawsuit and the end of King’s first marriage.

King previously married to her high school sweetheart, and eventual World Team Tennis founder Larry W. King (not the longtime CNN host), in 1965. Eventually, she realized her attraction to women, and started a relationship with her live-in secretary Marilyn Barnett.

When it ended and the Kings asked Barnett to move out of her home, she refused and threatened to out her. Barnett was eventually ordered to leave the home, but King was outed when Barnett’s filed her “palimony” suit, which was eventually thrown out.

The Kings formally divorced in 1987 and both have since remarried, although they remain friendly. In fact, Kloss is the CEO and commissioner of World Team Tennis, and King and Kloss are the godparents to Larry’s children, Sky and Katie.

King details her journey to coming out as “a continuum” in All-In.

“You’re finding your truth, and it doesn’t have to stay the same. I only liked guys when I was young. I didn’t think about girls. And then all of a sudden I’m like, ‘Oh my God, what’s happening?’ My truth was changing over time. It took me forever.”

Her advice to the future generations, King writes, is for everyone to be true to themselves. “Kids today, because the environment is different, if you want to say, I’m bi or I’m gay, or whatever, they can find someone to say, Okay, that’s good! And it does evolve.

“We’re all much more fluid in our sexuality than we realize. You can fall in love with somebody no matter what their sexuality is. It’s much healthier today than it’s ever been and hopefully it will continue.”