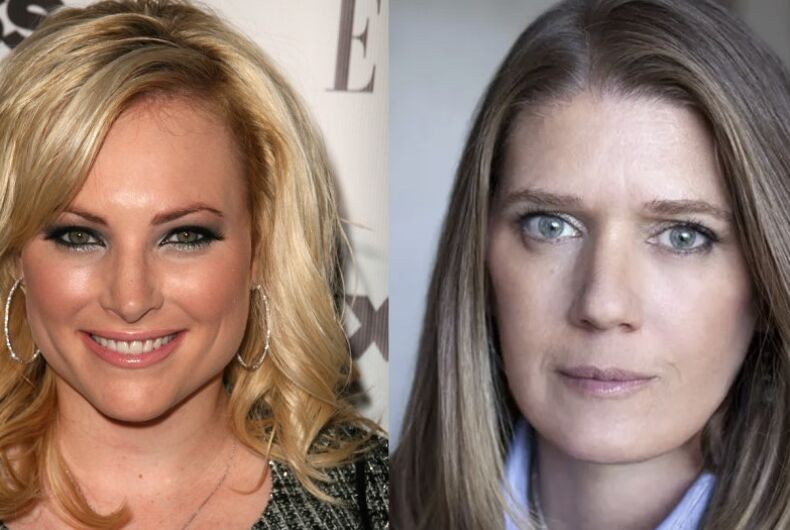 Mary Trump, the lesbian niece of Republican former President Donald Trump, has criticized Meghan McCain, the conservative former co-host of the daytime talk show The View, for her rudeness and cowardice.

Trump slammed McCain in a recent interview with The Daily Beast. The interviewer asked her why McCain avoided appearing on The View when Mary Trump was recently booked for an interview on the program.

Related: Mary Trump warns Donald Trump’s kids that their dad “would never do anything to protect them”

“I think she’s just really kind and wanted to help me sell more books,” Trump laughed. “No, that’s not it. I think she’s a coward. And she’s afraid of people who are not only willing but able to call her out. I’m pretty sure she probably remembers our first meeting.”

She was referring to her July 23, 2020 appearance on The View. During that time, Trump had come on to discuss her first book, Too Much And Never Enough: How My Family Created the World’s Most Dangerous Man. The book discussed the family dynamics that led to our dysfunctional 45th president, Donald Trump.

During that discussion, McCain told Trump, “I don’t like books like this, I don’t like family tell-all books, especially when it comes to families with fame and power because they’re told from one side and often the subjects are villainized to the point that I don’t actually end up believing the stuff written… At the end of the day, you get a really good paycheck out of it.”

McCain also blasted Trump for claiming to have insights into Donald Trump despite being his “extended family.” She also criticized her for allegedly going to the White House during the Trump presidency to have a family dinner on the taxpayer’s dime.

Trump responded by saying that she wasn’t an “extended relative” and that she took an extreme personal risk by publishing the book. (She has since had to get personal security for the death threats she’s received for writing it.)

Trump also noted that while the dinner was indeed on the taxpayer’s dime, such dinners are common in presidencies. This dinner, in particular, was for an aunt’s birthday rather than to be close to the prestige of the Trump presidency, she said.

“It was the first time in an interview somebody had been rude to me, and pushed back,” Trump told The Daily Beast. “And that’s great for me, that really helps me be sharper. And it was also sort of a confidence booster because I realized that I can do that. I can deal with stuff like that. I literally can’t remember the last time somebody was that disrespectful to me. I’ve done nothing to her.”

Trump noted that when she was recently scheduled to appear again on The View, this time to discuss her second book, The Reckoning: America’s Trauma and Finding a Way to Heal, McCain ducked the interview altogether. McCain appeared on earlier segments of that day’s show, but when Trump’s interview began, McCain was nowhere to be seen.

“I just thought I’m going to eviscerate her somehow,” Trump said about her anticipation of confronting McCain during her second appearance on The View. “And then I find out she’s not going to be on my segment even though I’d spoken to her producer for like half an hour. I thought I needed to find a way to drag her into this. Because, you know, she’s awful. I mean, she’s just a nonentity.”

McCain is no longer on The View. Meanwhile, Trump said her second book seeks to examine “what happened that made this country so vulnerable to people like [Donald Trimp], and to a political party that has done nothing over the last 40 years but convince people to vote against their own self interests.”