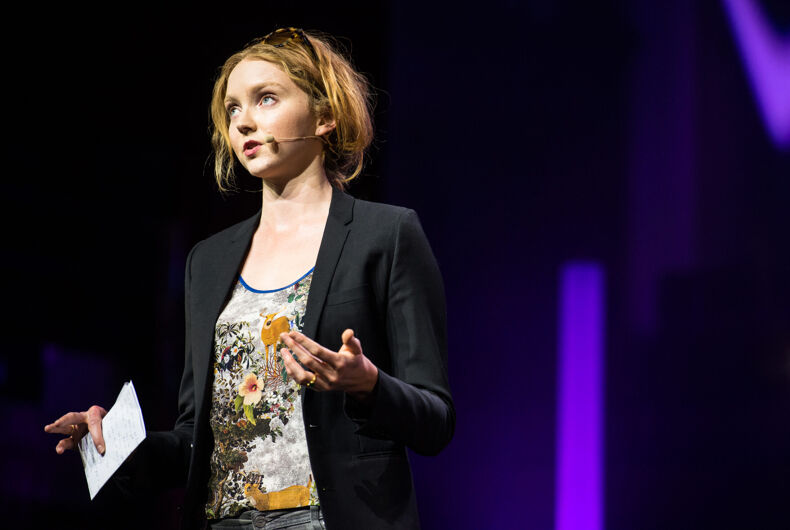 Lily Cole, the founder of the “planet-centric” ideas incubator Impossible.com, and a world-acclaimed model and actress, has come out as queer.

Cole made the revelation in her upcoming book while discussing how she navigates the world as the mother of an interracial child and a oft-sexualized woman.

Related: Eddie Izzard vows to be first trans parliament member no matter how many times she has to run

“If I were living in another country today, my queerness would be a crime. Had my mixed-race daughter been born in a different country, she would have been a crime,” she writes in her book Who Cares Wins: How to Protect the Planet You Love, which went on sale on August 12.

“I’ve always been quite private about my private life, consciously, and I want to continue to be, so I don’t feel the need to be explicit,” Rose said in a cover interview for the Sunday Times Style magazine which came out this weekend.

“At the same time I feel the need to acknowledge that I am not straight.”

Speaking further explained that queer most accurately defines her, as she finds other labels to be too “rigid” for defining her.

“I like that word [queer] because of its openness, because I think all those boundaries are quite rigid. I have lots of friends who identify as bisexual, lesbian or whatever, who also identify as queer,” she said.

In an Instagram post, she thanked the magazine for “asking me about some of the less obvious but important things that crop up in it such as #queerness, #plantmedicine, [and] #indigenouswisdom.”

Cole is in a relationship with Impossible.com (now known simply as Impossible) CEO Kwame Ferreira. He was born in Angola and raised between Brazil and Portugal. Ferreira is the inventor of “the VOID methodology,” which is a way of developing innovative structures for corporations and other groups. Together, they have a daughter, Wylde, born in 2015.

Cole was born in Devon, England, and rose to prominence in the 2000s as a teen model. She was awarded “Model of the Year” at the 2007 British Fashion Awards, considered one of the top models of the 2000s in a Vogue Paris list in 2009, and modelled on behalf of Great Britain at the 2012 Olympics in London.

She became a successful actress following her debut film appearance in St. Trinian’s at 20 years old. She had her debut as a lead actress playing the daughter of the titular character in The Imaginarium of Doctor Parnassus in 2009.

She’s subsequently appeared in the blockbuster films Snow White and the Huntsman, Star Wars: The Last Jedi, and The Moth Diaries. She has also appeared in music videos for artists such as Paul McCartney and in an episode of the acclaimed show Doctor Who.

Calling herself an “accidental entrepreneur,” in 2013 she founded Impossible.com (mostly referred to simply as Impossible), which started out as a mobile app. The venture, which she supports together with Ferreira and Wikipedia co-founder Jimmy Wales, among others, focused on creating projects that are “preserving life on Earth while fulfilling our potential together.”

Cole is noted for her environmental activism and has turned down modeling opportunities that may contribute to environmental harm, such as involving fur or for companies evicting people for mining diamonds. In addition to her book of the same title, Cole hosts a podcast entitled Who Cares Wins.

Mary Trump rips Meghan McCain for being a disrespectful “coward”