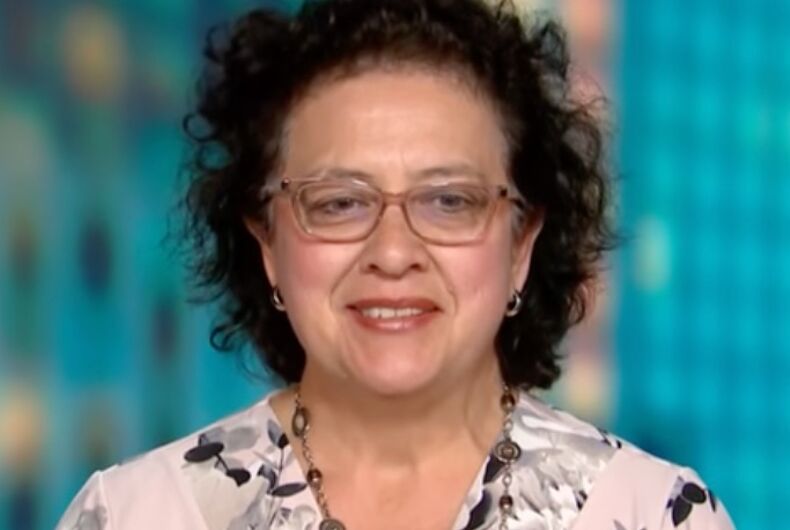 The Republican Texas Speaker of the House Dade Phelan has signed a civil arrest warrant for lesbian Representative Celia Israel. In July, Israel canceled her wedding so that she and 51 of her fellow Democratic state congress members could flee the state in order to block a restrictive GOP voting bill.

But to flee the state, Israel had to cancel her planned wedding to Celinda Garza, her partner of 26 years. The two had planned a July 15 wedding on the Texas House floor.

Israel said that marrying there would have a special significance for her. Not only would it show her dedication to serving the state, she said, but it’d also make a statement because the state legislature has a long history of passing anti-LGBTQ legislation.

During Garza’s fitting for her wedding outfit, a Democratic colleague called Israel to inform her about the Democratic plan to leave the state, KVUE reported. When Israel told her partner that they’d have to postpone the wedding, Garza wasn’t happy.

On August 10, Phelan signed arrest warrants for the 52 fleeing Democrats. Republican Texas Governor Greg Abbott had previously threatened to arrest them upon their return to the state. He also talked about locking them inside of the state House to force their vote on the voting bill and other legislation.

The other legislation includes bills that would ban transgender youth from playing sports and receiving medical care. The other planned bills would continue to target reproductive rights such as abortion, what they consider “critical race theory” and nearly 400 bills filed so far.

The Democrats had fled to D.C. in order to lobby federal Democrats to pass a national voting rights bill that would have de-fanged the Texas bill. But it’s highly unlikely that such a bill will pass the U.S. Senate since Republican Senate Minority Leader Mitch McConnell has called it “unnecessary” and a “political power grab.” He indicated the GOP would filibuster any attempt to pass voting reform measures.

It’s unclear how Phelan’s arrest warrant will affect the political maneuvering of the Texas Democrats or Israel’s future wedding plans.

He was sentenced to 50 years in prison for the death of a trans teen. He is not the victim.