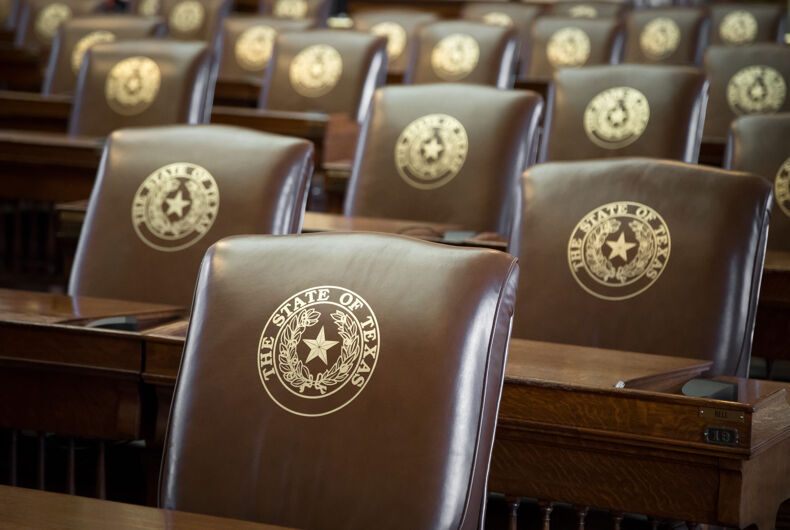 After running out of time in their initial session, Texas Republicans have not slowed down in their quest to pass laws that limit voting rights, ban “critical race theory,” and limit the rights of LGBTQ people.

While Republicans have a majority in both houses of the state legislature, Democrats were successfully able to block them from passing much of their agenda. So Gov. Greg Abbott (R) ordered a special session and called for his party to try again. In just five business days of the special session, at least 12 anti-trans bills have been introduced, and more could be on the horizon.

While several anti-LGBTQ bills made their way through state legislatures across the country and passed into law during the first half of 2021, there were many more that did not, thanks to activists and opposing legislators.

In Texas, activists, advocacy groups such as Texas Equality, and the minority Democrat coalition managed to prevent over 30 anti-LGBTQ bills from passing or becoming law earlier this year. Most died in the House, where the Republicans only hold the majority by eight votes.

That included a ban on trans youth from participating in sports in accordance with their gender identity, a proposal that seven states have adopted in the last year and a half. Abbott explicitly asked for the legislature to reconsider such a bill during this session.

Now, in efforts to please their colleagues and align with Republicans across the country, several versions of a ban on trans youth in sports have been proposed. Many other anti-trans proposals have been submitted so far, too, all within the start of the session on July 7.

A Senate committee hearing on SB 2 and 32 was held yesterday evening and both bills passed.

There are so many other pressing matters this state is facing, in light of the pain and toil we have been experiencing and have witnessed our many communities have gone through: Shame on you. Transgender Texans are Texans too. #Txlege #protecttranskids

“If you’re born a male or born a female, nothing can change that,” he claimed.

Charles Perry, the author of SB 2 and SB 32, is basically asking Jamey Harrison of University Interscholastic League whether trans girls are going to end sports opportunities for cis girls, misgendering trans girls in the process

Ricardo Martinez, our CEO, speaks against #SB2 and #SB32. "Regardless of what part of Texas our constituents call home, they have something in common: they are living through the worst year for LGBTQ+ state legislative attacks on their personhood."

House Bills 166 and 181, along with Senate Bills 18 and 66, ban trans youth from receiving gender-affirming care, including puberty blockers, hormones, or gender-affirming surgery, the latter of which is almost never conducted on minors. H.B. 181 defines parents that are allowing medical care as child abusers.

S.B. 66 explicitly bans mental healthcare providers from providing any care to youth in a way that is considered “inconsistent with the child’s biological sex,” including talk therapy or counseling. It was introduced by Rep. Matt Krause (R), who said “the sooner” that this “important topic” is considered by the legislature, “the better.”

Today I filed HB 166 which would prohibit gender modification surgeries/procedures/treatments for children under 18. This bill is similar to HB 1399 from the regular session. It’s an important topic for the legislature to address, & the sooner the better. Let’s get it done! pic.twitter.com/i3ttkZZrFL

There’s also House Bill 217, which would force healthcare workers and certifying reporters of birth certificates to list someone’s “biological sex,” or sex assigned at birth. It also effectively bans the ability for one to change the sex listed on their birth certificate.

That bill was introduced by Rep. Jake Ellzey (R), who is currently running to represent Texas in the U.S. House, replacing Rep. Ron Wright (R-TX), who died of COVID-19.

These are just the bills that explicitly target trans and gender non-conforming people. The legislature is also continuing to target reproductive rights such as abortion, voting accessibility, and what they consider “critical race theory” among the nearly 400 bills filed so far.

Let's play a game! Can you spot me in the back?

Jokes aside, I was honored to be part of passing the most conservative pro-life legislation in our state since Roe v. Wade. The #TexasHeartbeatAct is now signed into law and will protect babies as soon as a heartbeat is detected. pic.twitter.com/7jzZod52Z8

Other bills introduced impose limitations on bail or pretrial release from jail, oppose early release for certain offenses from prison, request an “interstate compact” to respond to the border “crisis,” and call for an audit of the 2020 election.

There are also legislative proposals that are currently left off the table. Pro-LGBTQ bills that died during the regular session, such as an effort to end the criminalization of HIV, remain off the agenda.

Many Democrats are hoping to force the legislature into quorum, meaning they can’t continue because they will fall under the required number of lawmakers in attendance to conduct official business.

Many Texas Democrats have skipped town, with several traveling to Washington, D.C. where they plan to lobby members of Congress to pass federal laws protecting voting rights and other issues that Texas Republicans are targeting.

My Democratic colleagues and I are leaving the state to break quorum and kill the Texas voter suppression bill.

We’re flying to DC to demand Congress pass the For The People Act and save our democracy.

The longer that Democrats are out, however, the more obligatory proposals will go without consideration, such as budgets for legislative staff and over fiscal decisions that may affect retired teachers, foster care workers, and law enforcement.

That has not deterred their Republican colleagues back at home. They have continued on with business as usual, and Gov. Abbott has pledged to “call special session after session” until his agenda is enacted by the legislature.

He has also resorted to attacking state lawmakers, claiming their decision “inflicts harm” on Texans more than allowing his party to enact his agenda.

“They will be corralled and cabined in the Capitol.” #txlege

Texas Democrats' decision to break a quorum of the #txlege inflicts harm on the Texans who elected them to serve.

As they fly across the country on cushy private planes, they leave undone issues that can help their districts & our state.

It's time to get back to work. pic.twitter.com/XE8VcgOFhs

Today, the House Republicans voted to pass a motion to “track down” missing Democrats and order them to appear back at the session, or otherwise face imprisonment. The motion calls for “the sergeant at arms, or officers appointed by him, [to] send for all absentees … under warrant of arrest if necessary.”

Since Texas law enforcement does not have jurisdiction outside of the state, “impact of the House move is unclear,” the Tribune reports.

Texas legislature passes a motion 76-4 to bring back Democrats who fled to D.C. "under warrant of arrest if necessary." pic.twitter.com/aTG9mB5be1

NEW: With Texas Democrats having left the state and depriving the legislature of quorum, House Republicans order Call of the House authorizing Texas state Troopers to arrest members of the Texas House who broke quorum.

DPS troopers do not have jurisdiction outside of Texas.

Ricardo Martinez, the executive director of Texas Equality, told the Texas Signal, “This is all placating to a small, but loud fringe minority, and for anti-LGBTQ and anti-equality legislatures, this is just another opportunity to garner some votes.”

Martinez pledged, “Our staff will be there every single day. There are going to be plenty of opportunities for constituents to have their voices heard whether it’s rallies, events, hearings, visits with their lawmakers.”

Other activists are still showing up to the Texas legislature as well.

It is warm out but we are getting ready to make some noise against #SB2 and #SB32 at the Texas Capitol#txlege pic.twitter.com/qRie1Asxcw

Is Bette Midler gearing up for a farewell tour?