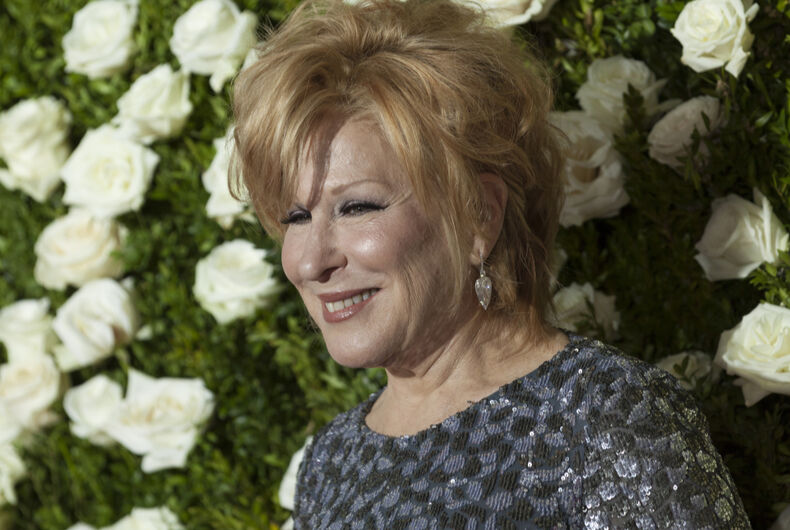 Is The Divine Miss M going on a farewell tour?

That’s the question Bette Midler’s fans are asking after she posted a cryptic comment on social media on July 2, suggesting a tour was a possibility.

The exchange began when a fan named Mask Up! asked Midler on Twitter to consider launching a tour so her fans could see her in person one more time.

“There is nothing like seeing you in concert, Miss M,” Mask Up! wrote. “Everything about your act is beautiful; the songs, the dialogue, the sets, you. Please give us one final chance to say farewell before you ride off into the sunset of retirement.”

Midler’s reply: “I must take this under advisement.”

Her answer got thousands of likes and triggered a flood of comments from fans on social media.

“Could this be a hint of a possible upcoming tour???” asked the moderator of the Bette Midler: Still Divine page on Facebook.

Fans from around the world weighed in, saying they wish she’d go on the road: “Come back to Australia,” one pleaded. “We love you.” “Come to London.” Come to KC.” “I wish the Divine Miss M would grace Denmark again.” “One last world tour please!”

Midler got her start singing at the Continental Baths in New York in the 1970s, accompanied by Barry Manilow on the piano, and she’s had a large LGBTQ following ever since. Next year will mark the 50th anniversary of the release of her first album, The Divine Miss M. Her movies include Beaches, The First Wives Club and Hocus Pocus. Her last recurring TV role was Hadassah Gold in Ryan Murphy’s The Politician. Her last Broadway role was portraying Dolly Gallagher Levi in the revival of Hello, Dolly!

The winner of four Golden Globes, three Grammys, three Emmys and a Tony, Midler has sent mixed signals before. After she turned 75 last fall, she indicated in a Parade magazine interview that her performing days may be over.

“My time on the stage is basically up,” Parade quoted her as saying. “I’m 75. I don’t have the impulse to prove myself anymore. I feel like ‘I did that.’ And I’ve done a lot. I’ve earned my rest. Am I going to make an announcement? No, I’m just going to fade away.”

She added that she has no regrets. “I did the best I could to give people joy,” she said. “And I had a lot of fun myself.”

Since then, Midler has done just the opposite of slowing down – raising funds for her New York Restoration Project to enhance green spaces in all five boroughs; promoting a children’s book she wrote entitled The Tale of the Mandarin Duck: A Modern Fable. In May, Disney Plus confirmed that she’ll appear in Hocus Pocus 2 along with Sarah Jessica Parker and Kathy Najimy, with filming to start this fall. And she still tweets nonstop about Donald Trump and what he’s doing since he left office.

Given Midler’s still-high profile, fans haven’t known quite what to make of her comments about fading away. They know performers come out of retirement all the time. And with the economy opening up as more people get vaccines, they see other 70-something performers such as Dolly Parton still in the limelight. Even Liza Minnelli had a concert on her 75th birthday in March, albeit virtually.

Midler hasn’t tweeted anything more about launching a farewell tour, one way or the other. That hasn’t stopped her admirers from saying what they’d like to see.

They know she can’t go back to where it all began, because the Continental Baths closed in 1976 and was replaced by the swingers’ club, Plato’s Retreat. But many of her followers say they’d like “Bathhouse Betty” to stage a series of intimate concerts rather than arena-sized extravaganzas, maybe after filming ends on Hocus Pocus 2. Many fondly recall how she and Robin Williams were the last guests on The Tonight Show Starring Johnny Carson in 1992 and she sang “One More For My Baby (and One More for the Road)”.

“Would love to see her in a more intimate setting than a stadium-type tour,” said a retired nurse in Pennsylvania. “Nothing fancy, no big set…just her singing.”

“Small settings with just a stool and a mic,” agreed a fan from the Midwest. “That would be just great.”

A mix of songs and jokes if she’s worried about her vocals, offers a doctor from West Palm Beach, Florida: “You are funny. Focus on that and throw a tune in here or there.”

Or she could go in the opposite direction. Now that concerts are allowed again, suggests a fan from New York, “you could decide to take over Central Park by surprise.”

I must take this under advisement. https://t.co/ZPMZxBtiBT