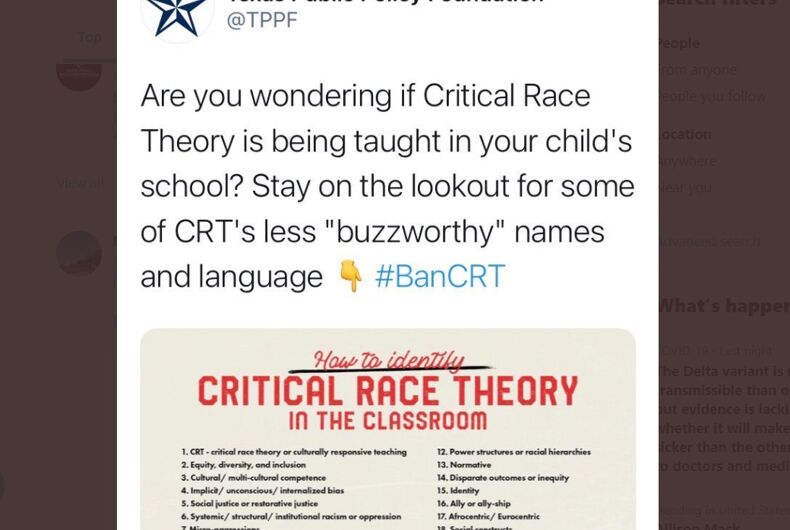 A conservative organization is being roundly mocked after they called for a long list of words to be banned in schools because they are “critical race theory” in disguise. The list included controversial words like “diversity,” “ally,” and “justice.”

“Are you wondering if Critical Race Theory is being taught in your child’s school? Stay on the lookout for some of CRT’s less ‘buzzworthy’ names and language,” the Texas Public Policy Foundation (TPPF) tweeted with the hashtag #BanCRT.

The TPPF has been obsessed with CRT this past year, insisting in multiple articles on their website that the academic movement started in the 1970s mostly by Black law professors is being taught to children in grade school. The organization – whose board is almost entirely white – is advocating for a law to ban CRT from schools.

For decades, CRT got very little attention in mainstream politics. But Republicans made it a bogeyman this past year, claiming that children are being taught CRT in school and GOP lawmakers in several states are trying to ban it.

And the list from TPPF makes it clear why they think it’s being taught in schools: they argue that almost any discussion of racism, diversity, or colonialism is CRT.

The “bipartisan” Texas Public Policy Foundation, whose board of directors is 99.99% white, is all in on protecting white supremacist history.

(@TPPF has since deleted👇🏻) pic.twitter.com/gcGRXhRnO5

Boy, I hope the Texas Public Policy Foundation can find a a nice big safe space to protect it from scary words like 'ally' and 'justice'.

Does your child's classroom contain chalkboards? Power outlets? Windows? It's a breeding ground for CRT!

Texas wants to ban the word "ally" from being used in the classroom. Good luck teaching about World War Two! https://t.co/jy4oISFMvq

The list of “less buzzworthy” words includes “anti-racism” and stating that Black lives matter, as well as talking about identity or inequality.

I truly appreciate the honesty of listing that Black lives matter— no caps so not the group but simply the idea that Black people have lived that matter — is considered CRT and suspicious and something to be challenged.

So, "anti-racism" is a thing you oppose?

The only way this list (from the Texas Public Policy Foundation, if you haven’t seen it) could be more hliariously on-the-nose is if it included “Black people are fully human” as a warning sign. pic.twitter.com/F2FRbFOpb6

Even words about colonialism made the list, which, as some people pointed out on Twitter, would make teaching history difficult since the fact that the U.S. was once a colony of Britain is a big deal in U.S. history, and it’s hard to understand the world today without knowing that centuries of colonialism happened.

is your child's school discussing "colonialism"? You know, that thing that created our geopolitical world as it exists today? that's critical race theory! https://t.co/6elrCOd4Wo

People also pointed out that conservative organizations like TPPF have spent years arguing for free speech in education, claiming that conservatives are silenced in schools, but now they want to ban an entire list of words they don’t like.

Hey, remember when you all were *against* cancel culture and *for* free speech on campus? pic.twitter.com/BLoJIO7ejI

If you go on the Texas Policy Policy Foundation website and search for "free speech" you get 678 hits. The top hit warns that "there is no more pressing issue in higher education today" that restrictions on speech.
Also: Please report anyone using one of the restricted words. pic.twitter.com/QtgKHS0juO