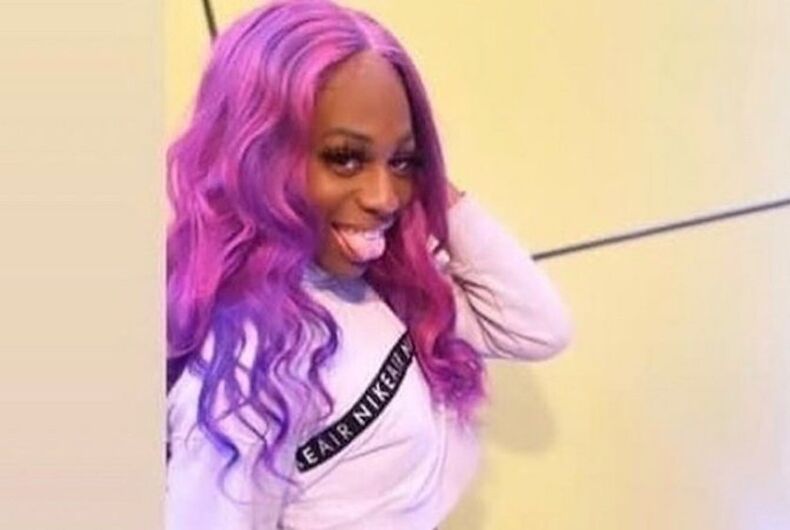 A person admitting to orchestrating the murder of an Arkansas transgender girl has agreed to a lengthy prison sentence, but the girl is being blamed for her death online in misrepresented social media posts stoking anti-trans rhetoric and stereotypes.

17 year-old Brayla Stone was found dead in a van in Sherwood, Arkansas  — a city 10 miles north of Little Rock — on June 25. While she was known as a girl, authorities, media, and her family have since continuously deadnamed and misgendered her. Now she’s being posthumously blamed for her own death as online media groups falsely suggest she misrepresented her identity and “hid” being trans from her murderer.

The Arkansas Democrat-Gazette reports that Trevone Miller, 20, has been sentenced to a 50 year prison sentence per a plea agreement he made with the Pulaski County prosecutors. He was reportedly facing life or the death penalty if convicted at trial. Now, he’ll be eligible for parole in 35 years.

According to a one sentence prosecutor’s report published by the Arkansas Times and signed on August 3, the motive given was that Miller killed Stone to “keep Ms. Stone from revealing that they were in a sexual relationship.” That contradicts authorities publicly maintaining that they did not believe her death was biased in any way, although Arkansas does not recognize hate crimes on the basis of gender identity even if they acknowledged it.

Reports from the Democrat-Gazette, some that refer to Stone by her deadname, indicate that “sentencing papers filed Thursday describe Trevone Hayse Miller’s motivation to kill Stone.”

Miller told another woman he was in a sexual relationship with that he was scared Stone was going to “expose” him for having a relationship with her, although she and others told authorities they did not take him seriously.

Since Stone has been murdered in June, medical examiners and the Sherwood Police Department have publicly provided little detail about her or her murder. Authorities began to refer to her by her deadname and as a ‘boy’ shortly after her case became publicized.

This was despite an Instagram user named @tapnseason posting an image of $100 bills and proclaiming that he had been paid $5,000 to murder Stone just days after her death. That account has since been deleted.

After the murder, Miller reportedly revealed to his manager at his job that he had “fucked up big time” and he “won’t be back” at work “for a very long time, if ever.”

Within a week of her body being discovered, Miller was arrested and charged with the murder. No one else has been charged in Stone’s murder.

Miller was previously charged with participating in the murder of 17 year-old Bryan Thompson in 2016. That victim was also shot and left for dead in the passenger’s seat of a van.

Miller, 14 at the time of Thompson’s murder, struck a plea deal at that time accepting a charge of aggravated robbery in exchange for his testimony. He ended up not having to testify as his alleged co-conspirators later pled guilty as well. The Democrat-Gazette reported in 2017 that the attempt to rob Thompson was an idea initiated by Miller.

Miller was also previously charged with identity theft and firearms possession in March 2020. Despite facing 20 years behind bars for the charges, he was released following his arrest.

Still, he is earning sympathy online. A Twitter account attributed to “Say Cheese Media” shared Miller’s sentence claiming he wanted to “hide” the relationship, without explaining his prior acts or that he told friends about the relationship.

The posts have misled users to believe that Stone somehow contributed to her own death, or that she hid her identity from Miller, which is not substantiated by any reporting.

nothing about this story ever said she was "hiding" the fact that she's trans, yet people are claiming she did and calling her a liar. blaming her for her own MURDER over something they just assume about all trans people.

Her name is Brayla Stone!!!! Justice for her!!!! This is sickening the fact that it’ll never get better :(

Kinda weird how you’re calling out trans people who make jokes about their personal experiences… instead of the cis people who perpetuate this hatred and transphobia :///

Being with a trans person does not make you gay.

Raised one of seven siblings, Stone was remembered by one friend as the “light of my life” and described as “youthfully royal” in memorials, fitting as her favorite colors were red and purple.

Still, her identity has been subsequently ignored and consistently erased or misreported in local reporting.

FOX 16, one of the first news outlets to report on Stone’s murder, continued to deadname the teen after her death, writing, “Many people are asking us to refer to the victim as ‘Brayla.’ We have consulted with the Stone family. They have asked us to use the victim’s birth name in our reporting.”

A fund was even raised by a local minister, Lucas Delaney, that would go toward her funeral. After speaking to members of her family, some of who refused to recognize Brayla by her identity, Delaney instead donated a majority of the funds to local LGBTQ organization InTRANSitive Arkansas, which started giving out Brayla Stone Microgrants.

A Change.org petition demanding “Justice for Brayla Stone” collected 150,000 signatures within a week of her murder, calling out a lack of mainstream media coverage in her death. That petition has since garnered over 660,000 signatures.

“Brayla was someone who always held space for others to be themselves and express their identities. Despite the fact that these institutions didn’t support Brayla, it is important that we uplift her memory and dedicate ourselves to seeking justice for her,” they said of Stone after her murder.

“Brayla Stone was a child. A child, just beginning to live her life,” Tori Cooper, the Human Rights Campaign’s director of community engagement for the Transgender Justice Initiative, said in a statement recognizing her death last year.

She added, “As a nation, we failed Brayla — as we have failed every transgender or gender non-conforming person killed in a country that embraces violence and upholds transphobia, racism, homophobia.”

Stone has also been memorialized by the National Coalition of Anti-Violence Programs, the National Black Justice Coalition, and with a page on the Say Their Names Memorial.

#JusticeforBraylaStone #sayHERname⁣
⁣
Brayla Stone was a 17 year old Black transgender girl who was murdered in Little Rock, Arkansas on June 25th. Say HER name – the media coverage has been misgendering her, SHE was a Black trans girl. pic.twitter.com/ibjWsuZsEy

Brayla Stone was a 17-year-old Black trans girl who was murdered in Little Rock, Arkansas on June 25.