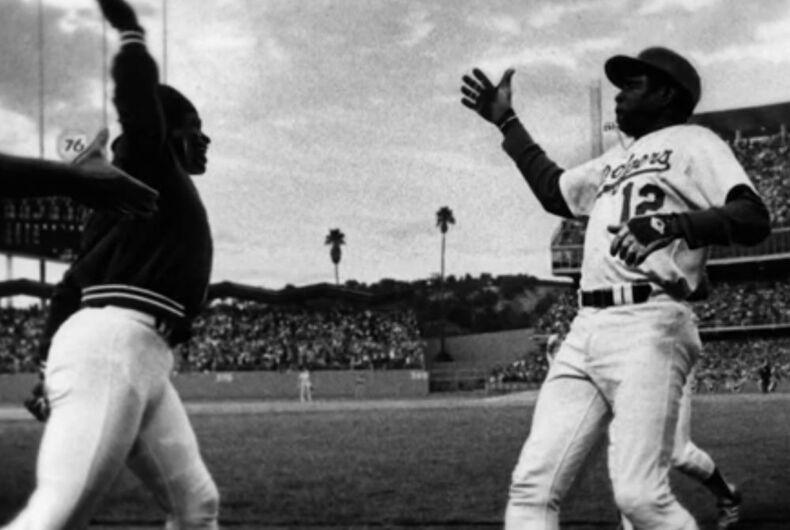 It’s a simple gesture, like a handshake or a wave. We do it with our friends, our colleagues, our teammates, and even with our kids.

The high five — that gesture of genuine celebration — is now commonplace in our culture. But few of us know its role in LGBTQ history.

Its origin is documented to the Los Angeles Dodgers’ Glenn Burke, the first gay player in Major League Baseball out to his teammates and management.

A basketball star at Berkeley (California) High School, Burke gravitated to baseball. He was drafted by the Dodgers at age 19, in 1972, from Merritt College, a two-year college in Oakland.

Baseball scouts ranked him high for his throwing, power and speed. By late season 1977, the Dodgers called him up to the big leagues, just before the team advanced to the World Series before losing to the New York Yankees.

His humor and surliness soon earned him recognition of the soul of the clubhouse. And that sets the stage for the famous high five.

It came not long after Burke’s arrival, on Oct. 2, 1977, in the last regular-season game, against the Houston Astros. His Dodger teammate Dusty Baker, eventually an MLB manager, had just hit a home run, his 30th of the season.

Burke raised his hands in celebration. Baker slapped them back.

Burke then stepped to the plate and hit his own homer, the first of his short career. Baker returned the favor with another high hands-slap.

If only Burke’s career were as celebratory as the high five.

Teammates recall his antics and good humor. One even cited Burke’s red jock strap, a standout in that era of white Bikes. But as rumors swirled, Burke didn’t hide his sexuality. Dodgers management made it an issue in 1978, and it offered him pay for his honeymoon if he married.

“I guess you mean to a woman,” Burke reportedly said in reply.

He didn’t marry, and Dodgers manager Tommy Lasorda Sr. soured on Burke, even more so because Burke was linked to a relationship with his son, Tom Jr., known as “Spunky.” The elder Lasorda denied his son was gay, even as his son eventually died of complications from AIDS in 1991.

Dodger players, who appreciated Burke’s contributions to the team, went on record against his trade to the Oakland A’s. On his hometown team, Burke was a starter the first year but played less the next season after a pinched a nerve in his neck.

Going into the 1980 season, Burke was to play for brutally outspoken manager Billy Martin. To Burke’s new teammates, Martin would introduce him as the faggot on the team.

But the stress, the isolation and a knee injury contributed to Burke’s demotion to a minor-league team in Utah, where he was released before the season ended.

After baseball, Burke competed in the 1982 and 1986 Gay Games, and he was a standout player in the San Francisco Gay Softball League. He became a figure in the Castro district, where he high-fived others in a sign of pride.

But Burke’s leg and foot were crushed by a car in 1987, and his life went into decline. He was arrested and jailed on grand theft and drug charges, and he lived on the streets and panhandled in the Castro. He spent his final months with his sister, in Oakland, and when of his battle with AIDS became public, the Oakland A’s helped support him financially.

Years later, pro sports leagues and teams now have a presence at Pride parades. Even with no out players, Major League Baseball has an ambassador for inclusion, former player Billy Bean, who played from 1978-95, and came out in 1999.

Yet, long since Glenn Burke, very few male pro athletes in any sport are out. Burke, out to his teammates and employers, was a pioneer, even if not out to the broader public.

“They can’t ever say now that a gay man can’t play in the majors,” Burke said, “because I’m a gay man, and I made it.”

The year of his death, Burke published his biography, Out at Home: The True Story of Glenn Burke, Baseball’s First Openly Gay Player. He’s also the focus of the documentary Out. The Glenn Burke Story, nominated for an Emmy Award in 2010. But his story, his achievement and his contributions aren’t broadly recognized.

A year before he died, Burke reflected on his baseball career to The New York Times.

“Prejudice drove me out of baseball sooner than I should have,” Burke said. “But I wasn’t changing.”

Pride in Pictures 2017: Cheers for Edie