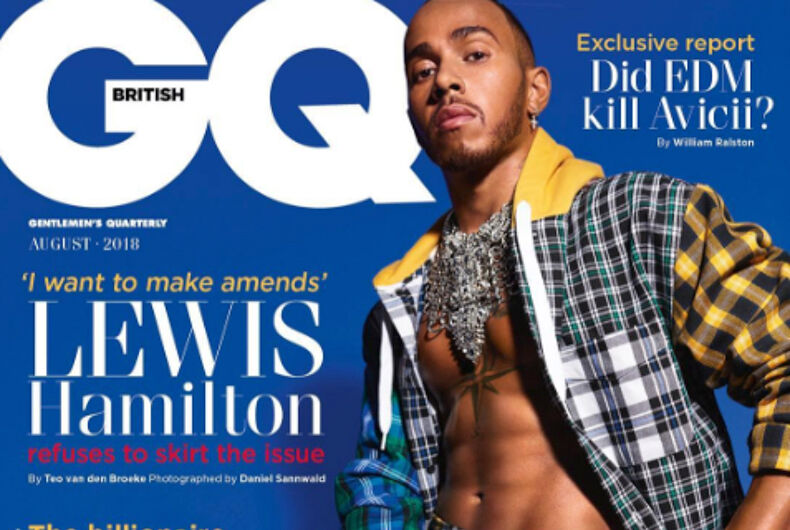 He’s fast. He’s dramatic. But now British race-car driver Lewis Hamilton is making over his image with an apology.

And by wearing a kilt on British GQ.

Late last year, the four-time Formula 1 champion had gender-shamed his nephew for wearing a dress — not privately, but on his Instagram account with 5.7 million followers.

“I’m so sad right now. Look at my nephew,” Hamilton said in a posted video with his young nephew, who was wearing a purple-and-pink princess dress.

“Boys don’t wear dresses,” he yelled. His nephew covered his ears and turned away.

Related: Formula One racer Lewis Hamilton publicly shamed his nephew on Christmas & no one is having it

He was roundly criticized, though elements of his testosterone-driven fan base praised him.

Hamilton, 33, later apologized with three tweets, written with the flair of a publicist. The final one:

“I have always been in support of anyone living their life exactly how they wish, and I hope I can be forgiven for this lapse of judgment.”

The splash on British GQ is part apology and more intricate marketing dance. Tommy Hilfiger designed the GQ kilts for Hamilton. While Hilfiger was touted for approving the photo shoot, he and Hamilton are — but of course — creating a clothing line together.

With the British GQ rebrand, Hamilton himself offered no more insight. He tried to let the kilts speak for themselves. And in his column, GQ editor Dylan Jones skipped the gender-shaming incident.

Jones said he invited Hamilton to be on the British Fashion Council a few years ago — indicating Hamilton’s holiday outburst derailed the clothing project. His column focused only on praising Hamilton for his attention to detail.

“If in the past some F1 drivers’ devotion has surpassed reason, with Hamilton one senses an almost mathematical obsession with minutiae, both mechanical and statistical,” Jones wrote.

In a sidebar to the British GQ cover story, writer Teo Van Den Broeke said he was conflicted about Hamilton yet painted an apology for him.

“To me he seemed like a young man both blessed with good intentions and cursed with a severe lack of guidance,” Van Den Broeke said.

“During my time with Hamilton, I sensed that the slight superiority he occasionally projects is in fact little more than a wall he’s built to protect himself.”

In 1977, a gay baseball player invented the high-five