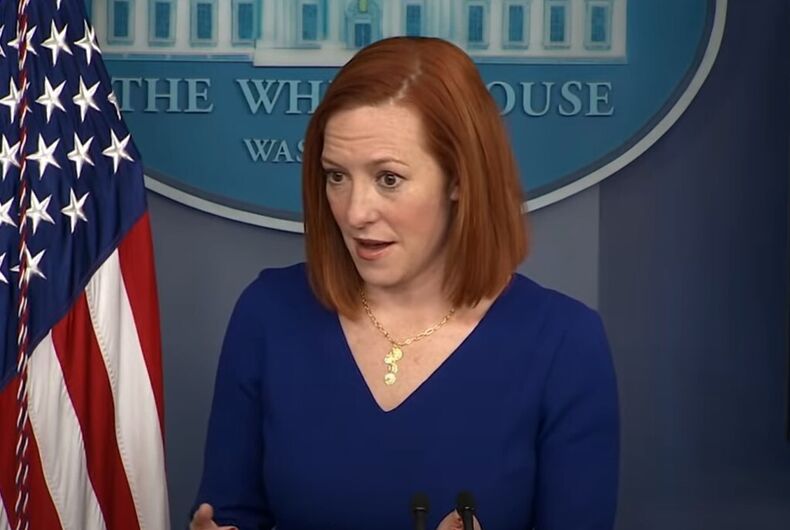 White House Press Secretary Jen Psaki is not messing around with ridiculous questions from right-wing reporters this week. Yesterday, she shut down a reporter asking about GOP senators’ demand that President Biden resign over his handling of the pullout of American troops from Afghanistan.

Today, she put a reporter in the doghouse after he continued his hard-hitting coverage of the President’s dog, Major.

Related: Tucker Carlson works himself into a rage because he doesn’t know what “bisexual” means

The New York Post reporter broke what journalist Aaron Rupar sarcastically deemed “the biggest presidential scandal in history,” by asking Psaki if she had lied about how many times the German Shepard rescue pup had bitten Secret Service members.

The reporter quotes Judicial Watch, a rightwing outfit that regularly promotes conspiracy theories and files Freedom of Information Act requests hoping to hit paydirt for potential scandals, saying that an email they dug up shows that “Secret Service agents were bitten every single day for eight days.”

Psaki only told the press about one incident, he said, before saying the dogs had been taken out of the White House and sent back to Delaware for obedience training and help to be less skittish in new surroundings.

“Obviously, that is not the world’s most important story,” he admitted before continuing on. “But it is significant because we expect honest information even for minor stories. So can you explain to us why there was some sort of misleading account presented to us? If we can’t get honest information about minor stories, why should we believe the administration’s account for larger issues like Afghanistan?”

“I know you do keep the dog in the news in the briefing room,” Psaki snarked, “so thank you for that.”

She went on to reiterate that Major has had some challenges adjusting to life in the White House where he’s constantly surrounded by strangers in a new environment and detailed what was happening in Delaware to help him deal with the anxiety it was causing.

“I don’t have any more specifics, but I think that speaks to where Major is located to be transparently honest with your ongoing interest in the dog.”

It isn’t the first time Psaki has had a battle of wits with an unarmed opponent. The same reporter previously wanted to know whether or not Biden was demanding “reparations” from China for the coronavirus pandemic. While the outbreak originated in China, US intelligence officials announced today that they could not say for certain whether the virus came from a lab leak or was spread naturally from animal to human.

“All you need to know about Judicial Watch is that they demanded to see the dog records but are not interested in getting secret service records regarding the insurrection,” one Twitter user commented after seeing the clip.

“Love how she subtly insults people but they are too stupid to get it,” another added with the laughing face emoji.

“The New York Post has been doubling down on Biden criticism for weeks, while avoiding objectivity whatsoever. Rupert must be proud,” another person opined.

“It’s amazing how much money the right burns trying to disrupt rather than just working with reality to advance their agenda,” someone replied. “Far cheaper for everyone to just stop feeding the performance theater.”

But maybe user jersey girl has nailed the issue.

“He’s confused because when he wears *his* collar and leash, he always does what he’s told,” they quipped.

It's amazing how much money the right burns trying to disrupt rather than just working with reality to advance their agenda. Far cheaper for everyone to just stop feeding the performance theater.

Love how she subtly insults people but they are too stupid to get it. 😂

Good freaking grief. @JudicialWatch is both dangerous and laughable. That reporter is wasting a valuable seat. @PressSec is amazing in her self control and decorum.

He’s confused because when he wears *his* collar and leash, he always does what he’s told.