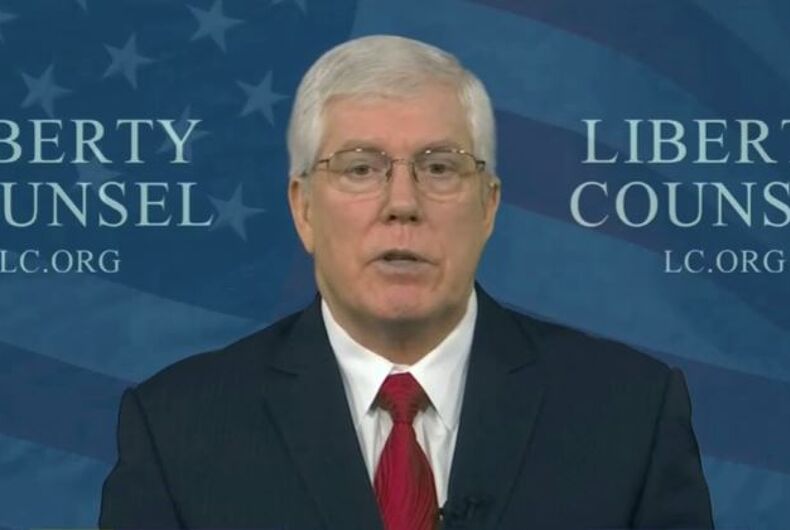 Mat Staver, the founder of the rabidly anti-LGBTQ legal advocacy group The Liberty Counsel, wants everyone to know that if airlines require all their employees to get COVID-19 vaccines, it will cause plane crashes.

According to Staver’s recent press release, numerous pilots and flight attendants have told him that “an increased number of safety incidents” are happening on flights due to the “extreme stress” created by the airlines’ vaccine mandates. The incidents are so extreme, Staver claims, that one pilot confided to him that he no longer feels safe flying if he’s not in the captain’s seat.

Related: Mat Staver compares us to Nazis and warns against our godless “satanic forces”

Staver didn’t actually mention what these incidents are, but he did share some spooky, unsourced anecdotes to illustrate his point.

“Flight attendants are coming to the cockpit in tears due to the stress,” he wrote. “Yet another said that due to distractions, there are also more safety incidents on the ground. Another said that a co-worker under fear of being terminated, succumbed to pressure and took the COVID shots, went into anaphylactic shock, and died.”

Staver’s story about anaphylactic shock is pure scaremongering. Out of 1,893,360 Americans who received their first doses of Pfizer-BioNTech COVID-19 vaccine, only 21 experienced anaphylactic shock and none of them died, according to the U.S. Centers for Disease Control (CDC).

Nevertheless, Staver wrote, “The airlines are jeopardizing the health and safety of their employees and passengers by pressuring them to get the COVID shots or be terminated. This is a national emergency that places crew and passengers at risk.”

At the end of his press release, Staver revealed his true intent by proclaiming, “No one should not be forced to inject this or any substance in their bodies against their will. It is wrong to violate the fundamental right to free and informed consent and bully people into compliance.”

So, Staver just opposes vaccine mandates. He doesn’t care about airline safety. If he did, he would know that United and Delta Airlines are the only major U.S. airlines that have said they’ll require vaccines for their U.S. employees. Two others, Southwest and American, have said they won’t require them. He’d also know that most airline workers’ unions support these mandates.

Staver has hammered his deranged opposition to vaccine mandates using baseless claims that the vaccines have caused “tens of thousands of deaths” as well as brain damage, miscarriages, and infertility. All of these claims have been debunked.

Nevertheless, his group recently filed a lawsuit against the governor of Maine and the state’s largest healthcare organizations for requiring medical workers to get vaccinated.

It’s no wonder that the Sothern Poverty Law Center has classified the organization as a hate group.