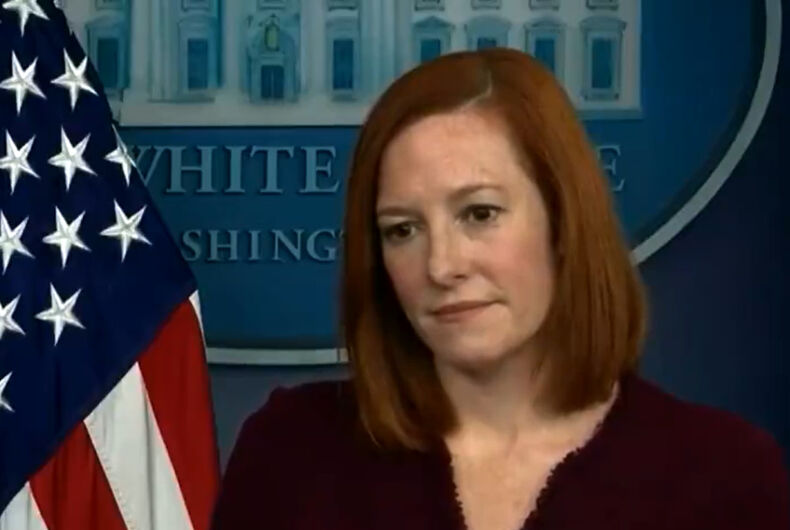 Shortly after the attack, Biden made a speech in which he pledged to punish those responsible. “To those who carried out this attack, as well as anyone who wishes America harm, know this—we will not forgive,” Biden said. “We will not forget. We will hunt you down and make you pay.”

Apparently, Doocy wasn’t clear what this meant. So at the Friday press briefing, he asked, “Jen, when the president says ‘We will hunt you down and make you pay,’ what does that look like? Is he going to order a mission to kill the people responsible or would he be satisfied if they are captured and brought to trial?”

Psaki quickly responded, “I think he made clear yesterday that he does not want them to live on the Earth anymore.”

When Fox News Correspondent Peter Doocy asked what kind of punishment President Biden would impose on the people responsible for the explosions near Kabul's International Airport, White House Press Secretary Jen Psaki replied: "He does not want them to live on the Earth anymore." pic.twitter.com/Rs3HRtW2GB

It’s unclear if Doocy was being serious or not. The U.S. doesn’t typically arrest international terrorists who attack and kill U.S. servicemembers on foreign soil—they just kill them.

Furthermore, Thursday’s attack was carried out by a member of ISIS-Khorasan (ISIS-K), a regional offshoot of the violent Islamic extremist militant group that has proclaimed attacks targeting civilians around the world (including the Pulse nightclub shooting).

Considering that the U.S. is currently rushing to evacuate U.S. forces and allies from Afghanistan by Biden’s August 31 deadline, a mission to physically detain and transport suspected ISIS-K terrorists to the U.S. would require the president to re-commit military troops to a deadly mission. In short, it’d prolong the 20-year U.S. occupation that Biden is currently working to end.

However, Biden held true to his word on Friday night as U.S. forces killed an ISIS-K member using an unmanned drone strike. It may be the first retaliatory killing of many as the clock ticks down to the Tuesday deadline.