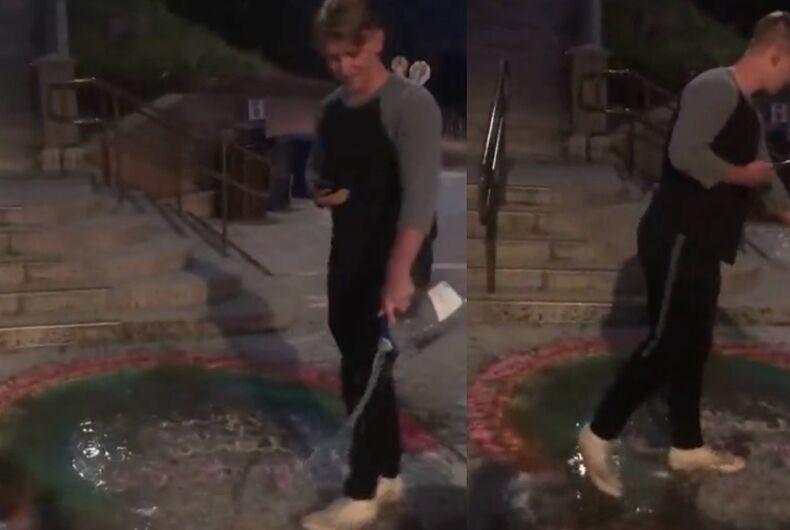 After web sleuths figured out Murray’s identity, he deleted his Facebook and LinkedIn pages. BYU is now investigating the incident.

The video begins with Murray pouring a gallon of water over a chalk sidewalk mural of a rainbow arch over a rainbow-colored Y. The rainbow-colored Y has become a symbol for BYU’s queer community at the notoriously anti-LGBTQ Mormon university.

“Hey guys,” Murray says to the young couple recording him. A man watching his vandalism sarcastically comments, “There you go. I hope you’re feeling a little less homophobic.”

A Provo resident named Amber Sorensen recorded the video. Her friend, Anthony Guth, is the male voice heard in it.

The chalk drawings had been created during a Thursday evening event called Chalk to Support LGBTQ BYU Students. Organized by BYU alumni Lauren Rogers and Valerie Dewey, the collaborative art project was meant to cheer up LGBTQ students after the campus hosted an anti-LGBTQ speaker on Monday.

The speaker was Jeffrey R Holland, a church elder and former BYU president. Holland said that some students struggle with the “same-sex challenge” and said that Mormons should never accept them.

“We have to be careful that love and empathy do not get interpreted as condoning and advocacy, or that orthodoxy and loyalty to principle not be interpreted as unkindness or disloyalty to people,” he said. He also said that true Mormons should provide “a little more musket fire” to defend “marriage as the union of a man and a woman.” LGBTQ students and activists interpreted his musket comment as a call for armed violence against queer people.

After numerous people re-posted the video of Murray’s homophobic actions, he was quickly identified by web sleuths who recognized his photos on LinkedIn and Facebook. He has since deactivated both accounts. His LinkedIn account described himself as a “nice guy” as well as a junior studying business administration and management at BYU.

BYU issued a response after numerous people notified the school about his actions.

“We unequivocally condemn behavior and language that is disrespectful and hurtful. There is no place for hateful speech, or prejudice of any kind, on our campus or in our community,” BYU wrote on Twitter. “The Honor Code explicitly states that each member of the BYU community has the obligation to respect others. The incident seen in a video circulating on social media is now under review.”

“We are striving to create a community of belonging composed of students, faculty and staff whose hearts are knit together in love,” the university’s statement continued. “Every student and individual on our campus deserves to feel that belonging.”

Despite its statement, BYU hasn’t done much to make its LGBTQ students feel welcome. In March, students lit up BYU’s sign in rainbow colors to show support for LGBTQ equality. The school quickly denounced the display as a violation of their policies.

In 2017, BYU faculty were told to report any students who didn’t conform to gender stereotypes. On top of all that, the university has a long history of support ex-gay therapy and anti-LGBTQ scholarship.

Despite its claims of wanting a community “knit together in love,” Murray embodies the very anti-LGBTQ sentiment that BYU has championed for decades.

To BYU’s meager credit, this week it announced a new office to fight discrimination and bigotry, the Office of Belonging. Its mission also includes anti-LGBTQ discrimination. This incident could well be one of its first cases.

Bathroom bullies attacked a trans teen. A state law could punish him for it