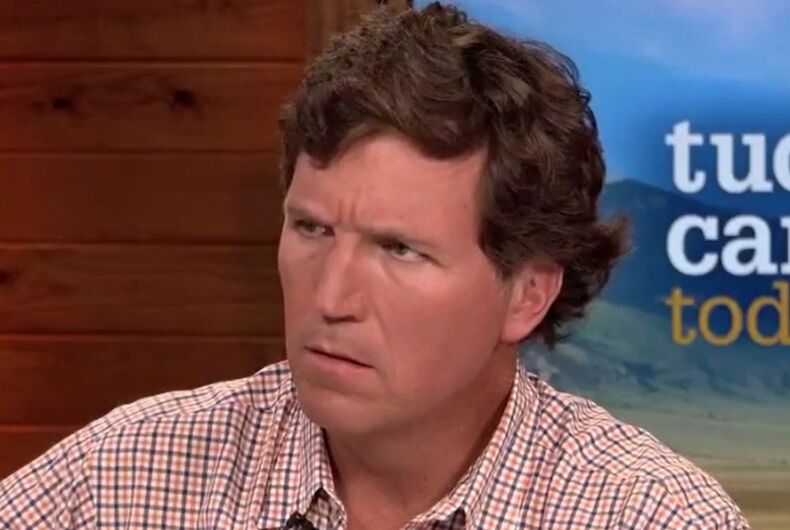 Fox News host attacked out Oregon Gov. Kate Brown (D) for being married to a man, but all he showed was that he doesn’t know what the word “bisexual” means.

On Wednesday night, Carlson started to denounce Brown for announcing a mask mandate in her state, but he quickly got distracted by her sexual orientation.

Carlson said, without proof, that voters “didn’t ask many questions” when voting for Brown but asserted that “the one thing they did learn about Kate Brown over and over again is that she is a self-described bisexual.”

“Why is this relevant?” Carlson asked, even though he was the one bringing it up. “Well, the media didn’t explain, they told us without exactly explaining what it meant, that this fact was historic and it was highly thrilling. Kate Brown’s sex life was shattering ceilings. Woo-hoo.”

“And yet if you looked a little closer, you noticed something a little weird,” he said. “Actually Kate Brown was married to a man. Yes, he had a different last name, but he was still, as they say on TikTok, binary. He was a dude. That’s fine, of course, but it was also a little confusing. How does having a groom at her wedding make Kate Brown an official member of the LGBTQ-exclamation-point community? No one bothered to ask.”

Carlson didn’t explain what was “confusing” about a bisexual woman marrying a man. Bisexual people are attracted to more than one gender and that can include men. It’s possible that most people already knew this and that’s why no one “bothered to ask.”

“To every bisexual person out there struggling to explain to your friends and family who you are and who you love: you are not alone,” she wrote. “Don’t let the bullies stop you from being true to yourself. You might even be a governor someday.”

To every bisexual person out there struggling to explain to your friends and family who you are and who you love: you are not alone. Don't let the bullies stop you from being true to yourself. You might even be a governor someday. https://t.co/pUaqJICsld

Carlson went on to say that the city of Portland was “destroyed” by “the leftwing militia” and that Oregon was handling the coronavirus pandemic badly because the state “had some dopey soccer mom who got elected because she claimed she had a girlfriend in college” as governor.

He called Brown “irrational” and said she “had no achievements,” ignoring her law degree and her decades-long career as a public servant. He said that she got elected just because she’s bisexual, even though she is the only out bisexual governor in the U.S.

Carlson said that her supposed ignorance and irrationality are why she signed a mandate this week calling for people to wear masks at crowded events where social distancing isn’t possible as the U.S. experiences another wave of coronavirus cases.

Oregon averaged 49 new cases per 100,000 people over the past seven days, according to the New York Times, putting it close to the national average.

He kissed his boyfriend & got off the bus with a smile. That’s when his basher attacked.