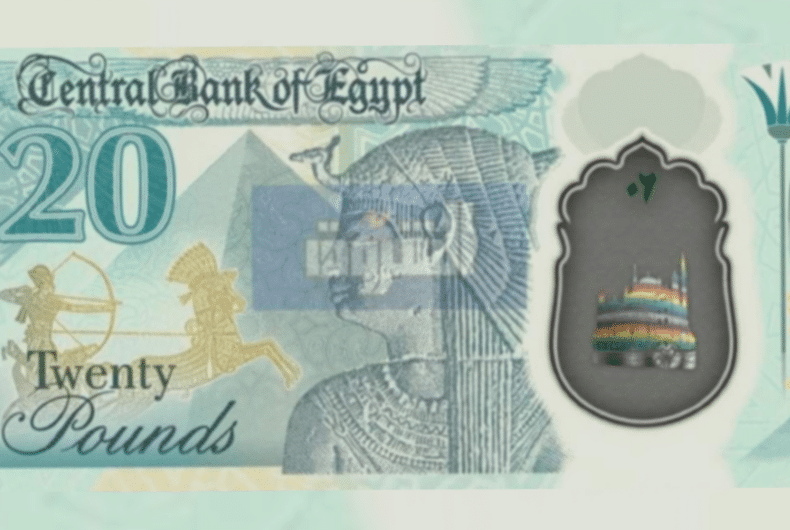 A mockup of the new 20 pound banknote includes a watermark feature to discourage counterfeiters Photo: Central Bank of Egypt

The Egyptian government has been forced to clarify that they do not intend to include an LGBTQ-positive message in the country’s 20-pound note.

Some citizens got upset when the Central Bank of Egypt debuted the country’s new polymer banknotes online, claiming a watermark is secretly a gay pride flag superimposed over a mosque.

The wild rumor started after the government unveiled the new notes. The new design includes an image of the newly-built Al-Fattah Al-Aleem mosque and the watermark is over top of the drawing.

The bank stressed that the designs were “preliminary” and that the “rainbow” is a security feature that only shows up when held a certain way in the light. It is a common feature on currency and credit cards to deter counterfeiting and theft.

“God, I was suspicious of [President Abdel Fattah Al-Sisi]. My suspicion was right,” one upset resident posted on Twitter. “The next edition will have a candlestick or star of David on it.”

“This is a great scandal and a sin!” another added. “The government/central bank/relevant ministries are responsible for this shameful act of placing an image of the gay flag on a mosque on our national currency note! They must correct it and issue an apology!”

While the “outrage” grew on Egyptian social media, the rest of the world was watching and wondering, as one person put it, “Don’t you have better things to worry about than a few colors on a banknote?”

The conservative majority Muslim country has a notoriously rocky relationship with the LGBTQ community. While homosexuality isn’t outlawed, it is still considered immoral.

The same year, authorities removed a gay tourist from life support and refused to return his body to his parents in England.

Lol all Egyptians are homosexuals now

Don't you have better things to worry about than a few colors on a banknote? 😒

imagine being afraid of a rainbow