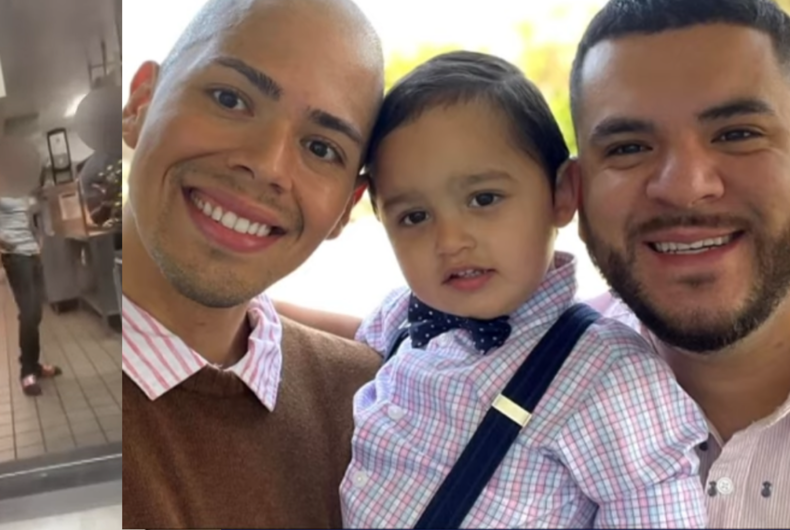 One of the restaurant employees (left) that allegedly refused to serve the Mendezes (right)Photo: Screenshot/KXTV

A California family is alleging that workers at a Burger King called them homophobic slurs, made fun of them, and chased them out of the store, fearing for their lives, simply because they were gay.

The incident happened on July 24, and everything got started when Leo and Romiro Mendez decided to order from one of the fast food chain’s restaurants in Salida, California.

Related: Christian organization attacks fast food for being too pro-LGBTQ

“Our two-year-old son was hungry, so I decided to place an order using my Burger King app so we wouldn’t have to wait for the food and because it’s right off the freeway,” Leo recounted.

Instead of feeding their son, they drove right into their nightmare.

“When we got to Burger King restaurant, the manager refused to give us our food saying the restaurant was closed even though they were still open.”

The couple tried to explain their ordeal, but they were instead told to leave and were mocked by the employees.

“He was calling us faggots, laughing at us, flipping us off and said he was going to go get the strap from the back,” said Leo.

Leo and Romiro filmed the encounter, including an employee saying the homophobic slurs. Then, things escalated when employees started to come into the parking lot.

“I wasn’t only discriminated against, my life could have been jeopardized.”

The Mendezes said that the corporation has not contacted them about the situation. They say that no amount of donations to LGBTQ organizations like the Human Rights Campaign will make up for their lack of response.

Stanislaus County Sheriff’s Office has said that Burger King employees co-operated with detectives because they believed the Mendezes were the aggressors. Still, detectives believe there was enough evidence to forward the case for the Stanislaus County District Attorney’s Office to investigate further as a potential hate incident.

“My husband and I were so scared for our lives we left without caring about a refund, food, or anything,” Leo said, “we just wanted to go home and be safe.”

They said they’ll never go to a Burger King again.

The company did not respond to a request for comment from Newsweek.

Why hold the Gay Games in Hong Kong? The city is ripe for reform on LGBTQ rights.