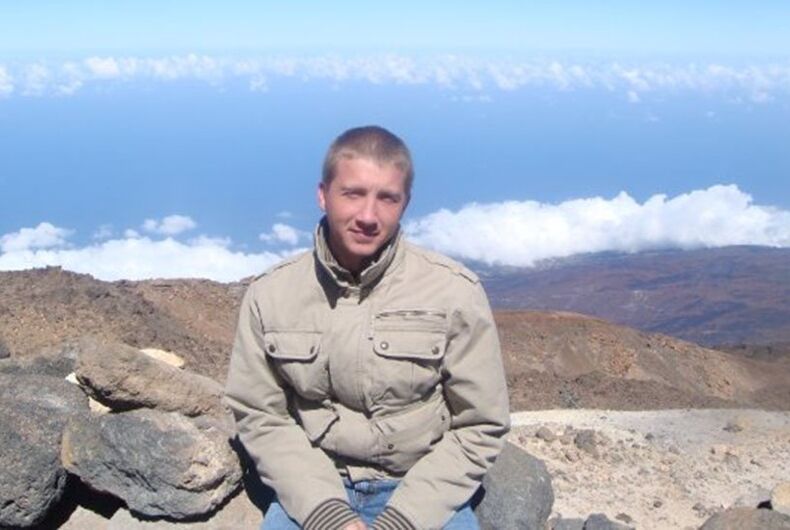 Adrian King died after he went into a coma while vacationing in Egypt. Photo: Facebook, via GSN

A grieving family is fighting to get her son’s body after he died during a trip to Egypt.

Adrian King, 39, was in Cairo, on vacation with a female friend. King, a gay British man, was on a safari trip when his kidneys appear to have failed. He was taken to a hospital and went into a coma.

King’s mother, Elaine Gilbert, told Gay Star News she was told on May 25 that her son had been in a coma for four days. She said she was then told five days later that he had died that morning. The hospital reportedly turned off the dialysis machine without notice or consultation with King’s family.

She told Gay Star News that during the same phone call where she was informed of the death of her son, the hospital told her they would not release his body to her until she paid them their bill, totaling £40,000 ($51,600, €46,000).

“It’s disgusting they would do that to a human life,” Gilbert said. “They’re supposed to save lives. But money comes first.”

His father, as well as King’s boyfriend, Eric, have been making phone calls, attempting to bring him home.

“We have been in close contact with Mr King’s family since his death, and our thoughts are with them at this difficult time,” a spokesperson for the Foreign and Commonwealth Office said.

“We are advising them on their options and liaising with the Egyptian authorities on their behalf.”

The family is planning to hold a memorial service for King without his body.

“I don’t think there’s any way we’re going to get him back. All I can think it’s just an empty vessel, it’s not my son,” King’s mother said.

“If I think my son is still in Egypt, it’s just too much. All I know is he is here with me.”

While there is so far no reason to believe homophobia played a part, the region has been ramping up attacks on the LGBTQ community in recent years.

In the late 1990s, police began enforcing old laws against prostitution and “debauchery” to target LGBTQ people, and ever since the ousting of Mohamed Morsi in 2013 the situation has only grown more dire.

Police are even known to use dating and hookup apps like Grindr to locate, arrest, and charge gay and bisexual men. Grindr was even forced to issue a warning to users that police may try to entrap and arrest them through use of the app.