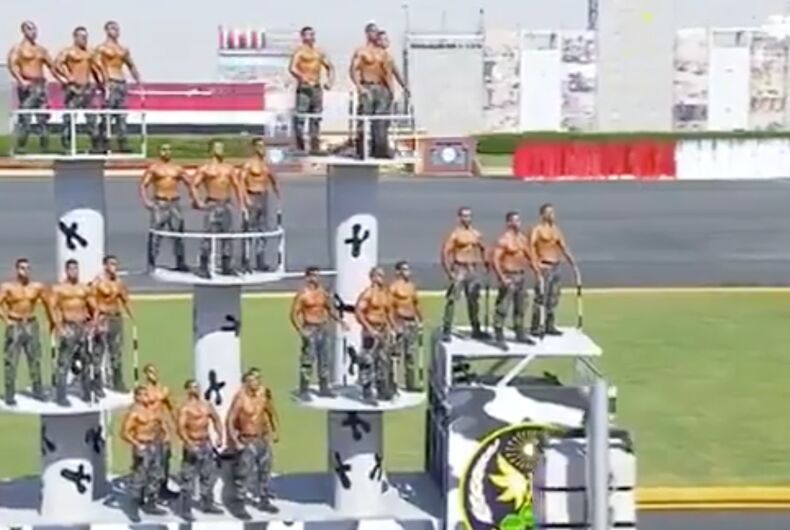 Egypt is one of the most homophobic countries on Earth, so a recent military graduation ceremony for officers has left the internet wondering….

Did the Egyptian military accidentally host the world’s gayest parade?

Related: A hospital in Egypt pulled a gay tourist off life support & won’t return his body

Social media when wild after footage of the big event was posted online showing more than 1,500 officers showing off their buff physiques by posing on military equipment, jumping through blazing hoops, and somersaulting over sharp spikes.

Sadly, no one yanked off a wig at the end.

“The more they undress, the more #Egyptian men are celebrated for virility, masculinity, strength,” author Mona Eltahawy tweeted. “These are students of the Police Academy on display on Thursday for our fascist dictator Sisi, whose regime has been arresting women for dancing and singing, fully clothed, on TikTok.”

Others, however, had a decidedly-less academic approach to the vapid ode to testosterone, demanding “more colors and brightness” and asking “where’s the assless chaps?”

Is this Egypt or Fire Island? pic.twitter.com/vvwOSsCvbz

For a terrifyingly homophobic and dangerously anti-LGBT government in Egypt, this screams pretty gay. https://t.co/At216ndhtF

Which song is next? YMCA or It’s Raining Men?

Where’s all the assess chaps?