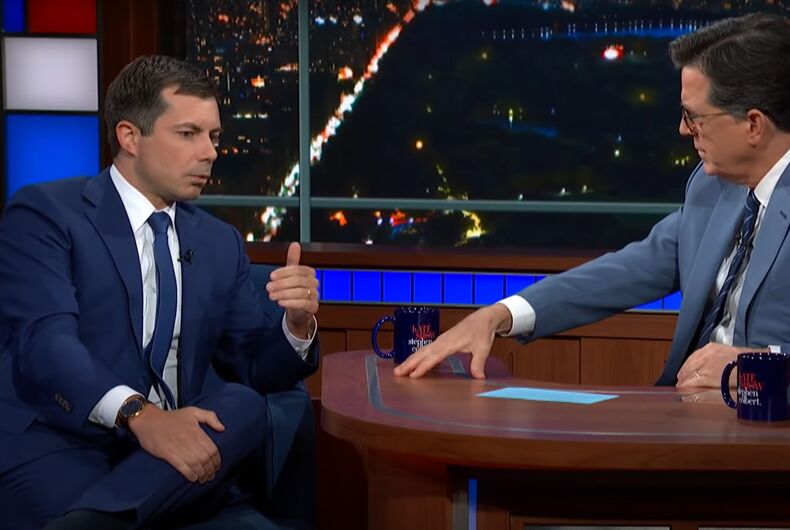 Out Secretary of Transportation Pete Buttigieg spoke out forcefully against the nationwide attacks on transgender youth on The Late Night with Stephen Colbert earlier this week to mark the end of Pride month, as well as progress made for LGBTQ people working in the U.S. government.

He also shared the drama from when his husband Chasten tried to buy him a bike after their recent move to Washington, D.C. – it involved a Pizza Hut and men with guns.

Colbert began by asking about Buttigieg’s recent Pride month comments, delivered last week alongside President Joe Biden. Buttigieg said that, as the first out gay cabinet member confirmed by the Senate, his comments underscored how far LGBTQ people have come.

“It wasn’t that long ago, if you look at the 50s, there was a historical episode called the Lavender Scare,” he said. “You couldn’t even be a bookkeeper or an astronomer in the federal government without your job being at risk if you were gay.”

“These kids have the courage to be who they are, and they just want to be accepted and go to the bathroom like everybody else, and play sports like everybody else and be – live,” Buttigieg said. He worried that anti-trans legislation conveys the message that trans people shouldn’t exist, something trans kids may believe.

Speaking directly to voters, Buttigieg said, “I hope that it will prove to not be good politics to pick on transgender kids when these political attacks and terrible laws get beaten back.”

Buttigieg also mentioned that in Biden’s proposed $1.2 trillion infrastructure bill, he is most excited about its improvements for the national rail system. “This is the biggest investment in passenger rail since Amtrak was created,” he said.

Last, he mentioned that he also enjoys bike riding in his new D.C. home, and that Chasten recently bought him a bike online. The seller agreed to meet them outside of a Pizza Hut, but he didn’t expect to see Buttigieg’s new security detail. The seller was surprised when three dark SUVs suddenly surrounded him in the parking lot.

But Buttigieg bought it and said the bike works great… except it got a flat last week.