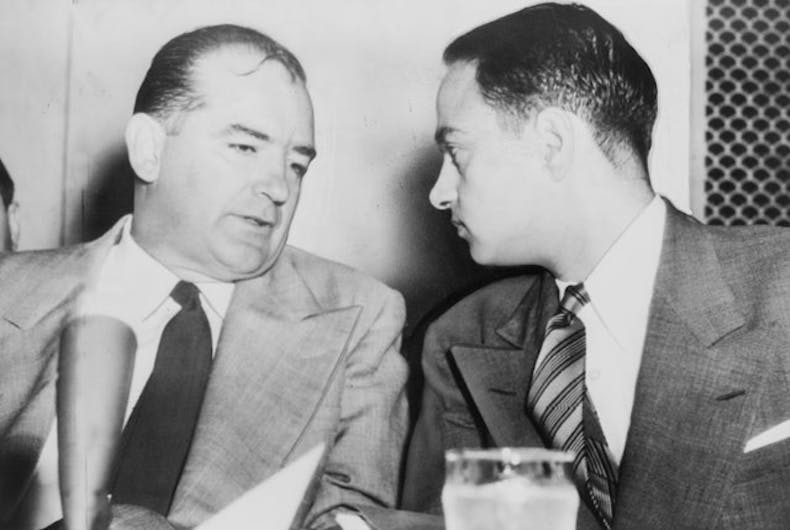 Progress revolves like a coil stretch out, advancing up and forward, then circling down and back, though not as far as when it began, until it starts its upward forward motion once again.

Like all civil service employees working during the Eisenhower administration, Madeleine Tress – a 24-year-old business economist at the Department of Commerce in Washington, D.C. – was required to pass a security investigation as a condition for employment. At her position for only a few months, on that April day in 1958, Madeleine was led into a room by two male examiners who began the “interview’” by asking her a few mundane questions regarding her name, where she lived, and her date of birth.

“Miss Tress,” one of the men then retorted, “the Commission has information that you are an admitted homosexual. What comment do you wish to make regarding this matter?”

Shocked, Madeleine froze and refused to answer the question. The men disclosed that they had reliable information that she had been seen frequenting a gay bar, the Redskins Lounge, and they named several of her lesbian and gay male friends. One of the male examiners then sneered, “How do you like having sex with women? You’ve never had it good until you’ve had it from a man.”

Tormented into silence, following the interrogation, she refused to sign a document admitting her alleged “crime.” The next day, Madeleine Tress handed in her official resignation.

By the late 1950s, literally thousands of women and men working in Washington, DC, experienced similar inquisitorial grillings conducted under the guise of “national security.”

There are moments in history when conditions come together to signal a seismic shift in the social and political landscape. Three critical moments sparked an era of fear, suspicion, and repression leading to the interrogation of Madeleine Tress.

The first occurred during the Truman administration in June 1947 when the US Senate Appropriations Committee warned Secretary of State Marshall that a concerted effort was being carried out for the alleged purpose of protecting Communist personnel in high government positions. This subversive project was said to have involved the employment of supposed admitted homosexuals in extremely classified positions who were presumed to have been security risks.

In their attempts to counter these alleged security lapses, the Committee attached the McCarran rider to an appropriations bill giving the Secretary of State authority to dismiss any employee at his “absolute discretion” to promote public security.

In part as a response to McCarthy’s allegations, the third moment emerged when Deputy Undersecretary of State, John Peurifoy, testified at a Senate appropriations committee meeting on February 28, 1950 denying, on one hand, that his Department hired Communists, but, on the other hand, disclosing that several persons had been fired for being “security risks,” including 91 homosexuals.

These disclosures set off a firestorm. Within one month, Republicans in the Congress ordered investigations looking into the extent of the “homosexual problem” and the “infiltration of sexual perverts” in government.

The so-called “Red Scare” was said to have been saturated with lavender, the color associated with homosexuality at the time. Some government officials connected the Comintern (an international Communist organization) with what they termed the “Homintern,” which they saw as an international homosexual conspiracy linked with Communists.

Although gay and lesbian citizens were never blackmailed into divulging classified state information and connections between homosexuality and “security risk” were groundless, mere allegations of homosexuality triggered congressional hearings and Presidential Executive Orders (for example, Eisenhower’s Order 10450, which extended and enlarged the Harry Truman loyalty/security program to exclude explicitly those who engage in “sexual perversion” from obtaining government jobs), as well as executive agency security briefings.

A determination of the exact numbers of women and men harmed by the anti-homosexual inquisition cannot be known since detailed records were not kept and many individuals simply resigned before they were interrogated. Approximately 5,000 federal agency employees, however, lost their jobs on suspicions of homosexuality during the 1950s through early 1960s.

Closer to our own times, the current administration has redacted the terms “Communists” and “Communism” and replaced these with “Muslims” and “Islamist Extremists,” while morphing “sexual perverts” and “homosexuals” into “predatory men in dresses” and “transgender advocates.”

Trump has incessantly blasted Islam as the number one threat to our nation, thus exposing U.S. Muslims to increased calls for travel bans from majority-Muslim countries, and the creation of a “national registry” and surveillance to track their movements. In his near–obsessive calls for “law and order,” he has invited a return to draconian (and possibly unconstitutional) measures of torture and surveillance.

In a memo sent from his Department of “Justice” to U.S. attorneys, department heads, and federal agencies, Trump’s Attorney General, Jefferson Beauregard Sessions, reversed an Obama-era policy that protected trans employees from discrimination under Title VII of the Civil Rights Act of 1964. Session made clear that his department would no longer interpret gender protections in Title VII to include gender identity and expression.

Since Trump’s inauguration, he abolished an Obama-era executive order permitting transgender students to use school facilities most closely aligning with their gender identities, and the White House website has removed reference to LGBT issues and policies from the previous administration.

Trump’s latest assault on the trans community comes in the form of a yet another likely rollback of protections initiated by his immediate predecessor. The Obama administration issued a policy directive manual enumerating the rights and responsibilities of transgender people in prison related to several areas including housing, strip searches, and medical care. The directive advised respect and protection of transgender inmates and, on a case-by-case basis, the possibility of residence in prisons matching their gender identities.

It should be crystal clear to everyone that both during the “Lavender Scare” and today during the Trump administrations “Trans Share,” the motives in declaring war on entire categories of people has nothing to do with concerns over improving military readiness, or security considerations, or ending discrimination in schools and in the workplace, or improving prison conditions.

It amounts to, though, demagogues engaging in the psychology of scapegoating by representing the “others” as manipulative and often violent predators out to circumvent and destroy the nation. By so doing, they play on people’s fears and prejudices for their own political, social, and economic gains, resulting in the loss of civil and human rights, harassment, violence, and at times, death of the “others.”

In that sense, Truman, Eisenhower, and now Trump have sent us down and backward upon the coil of progress.

Why did Fox News pull this racist, homophobic column?