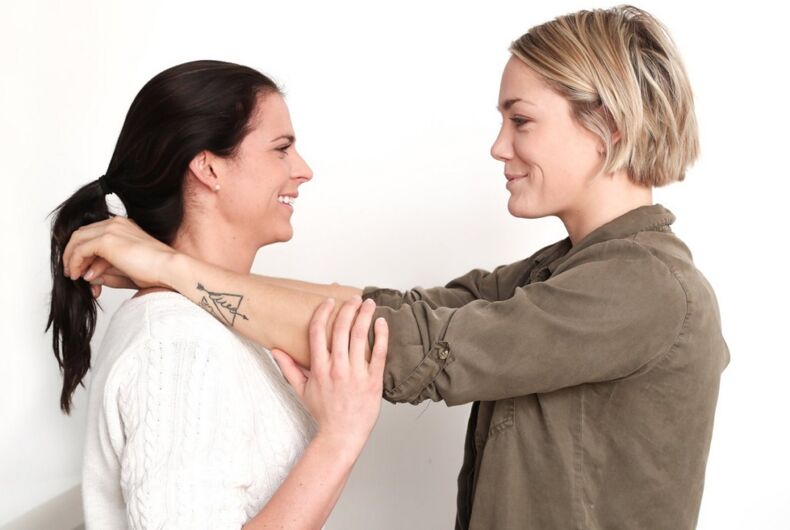 Judging from the LGBT and mainstream media, this is the first Winter Olympics with two openly gay athletes on the U.S. Olympic Team: Gus Kenworthy and Adam Rippon.

But what about Brittany Bowe?

Hillary Clinton mentioned two of them at a conference in Los Angeles earlier this week. “I’m excited that Adam Rippon and Gus Kenworthy will be the first openly gay Olympians for the American team.”

The ABC article goes on to discuss Rippon and Kenworthy and their criticism of Mike Pence. It doesn’t mention Bowe.

The Advocate‘s story on Clinton’s comments reads, “While 28-year-old figure skater Rippon and 26-year-old skier Gus Kenworthy are not the first LGBT athletes, they have made history as the first two to come out prior to the start of the Winter Olympics.”

Bizarrely, The Advocate included her in an earlier article about LGBT people at the Winter Olympics.

The Washington Post did an article on diversity on the U.S. team, and here’s where they mention the gays: “Yes, USOC officials are pleased the team includes more African Americans and Asian Americans — and even the first two openly gay men — than recent winter squads.”

That’s technically correct since the Post specified “gay men,” but the main point is about diversity so a reader would probably think that was an exhaustive list of all the LGBT people on the U.S. team.

Even Autostraddle – a great lesbian and bi women’s blog – omitted Bowe in an article entitled “5 Lesbian and Bisexual Women Athletes to Watch in the 2018 Winter Olympics.” The five mentioned are not from the U.S.

OutSports was the only LGBT publication that I found that got it right.

Don’t blame it on her. Bowe has done nothing to hide her sexual orientation. In 2017, she talked with NBC about dating Dutch speed skater Manon Kamminga.

“It’s nice being with somebody that has the same passion, same drive, same goals,” Bowe told NBC. “It’s obviously difficult living on different sides of the world. But we’re both focused on our goal. She’s trying to make her team. I’m trying to make my team. So it just works out.”

And if that was too subtle for some people out there, Bowe retweeted a picture of them with the message “Speedskaters @BrittanyBowe and @manonkamminga are happy in love.”

I do think that it’s weird. If LGBT media is going to call this a historic moment, then we should be getting the moment right.

So how did this weirdness happen? My guess is that Kenworthy and Rippon have gotten a lot of attention in the media for their comments about Mike Pence. Bowe, on the other hand, isn’t talking about politics with the media.

Also, she didn’t do the big public coming out moment. She just started talking about the woman she loves.

There are 243 athletes on the U.S. team. Journalists aren’t going to google all of them.

Anyway, Brittany Bowe seems like a positive person and a great role model for the kids. And it’s great that there are three openly LGBT athletes on the U.S. team this year.

Six decades later, the Lavender Scare is still with us

This teacher was fired for being lesbian. Now parents are rallying behind her.