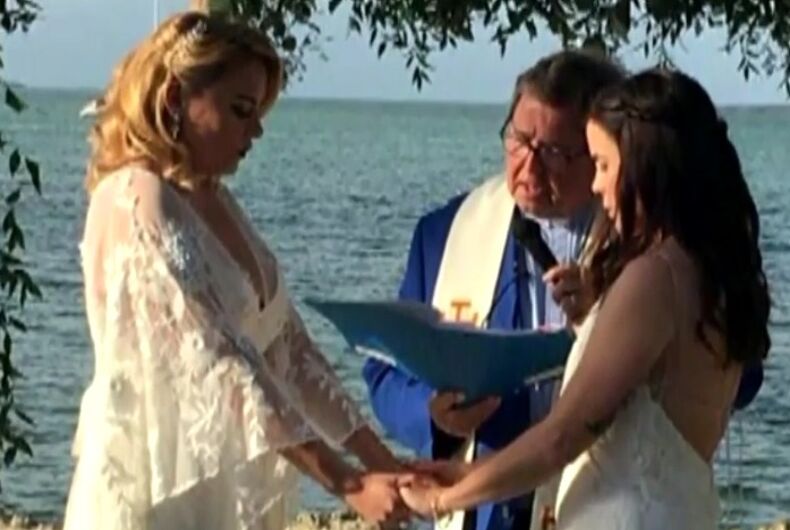 Parents of children at a Catholic school in Florida are mad that a teacher was fired just for being gay.

Jocelyn Morfii has taught first grade at Saints Peter and Paul Catholic School in Miami for seven years. By all accounts, she was good at her job and her students liked her.

That changed this week. Last weekend, Morfii got married to her longtime girlfriend and posted pictures on social media. By Tuesday, she was fired.

Principal Carlota Morales sent a letter to parents calling it a “difficult and necessary” decision to fire Morfii, without explaining why. The letter promised that the children’s education would not be disrupted, but didn’t show any concern for the disruption to Morfii’s life.

Parents were mad. “The way they handled this was just unbelievable,” parent Christiana Lopez said.

Some of the parents met with the administration and said that their concerns were not addressed.

“What she does at home – that’s none of our concern,” said Ricardo Oviedo. His daughter was in Morfii’s class. “The fact is, she maintained a high moral standard at school and was inscribing in our kids a sense of community and love.”

“You know, to be a Catholic, you’re taught to be forgiving. But if you’re gay, forget about it,” said Cynthia Cini, another parent.

A spokesperson for the Archdiocese of Miami, though, was unmoved. “[Morfii] broke the contract she signed when she began teaching at a Catholic school,” she said.

Morfii posted a statement on Facebook. “This weekend, I married the love of my life and, unfortunately, I was terminated from my job as a result. In their eyes, I’m not the right kind of Catholic for my choice of partner.”

Sure, the parents should have known that they were sending their kids to a homophobic institution. But a lot of straight people are just clueless and that’s no reason to punish this teacher and the kids who are being taught that being gay is something shameful.

Miami-Dade County has an ordinance that bans discrimination on the basis of sexual orientation and gender identity, but there’s an exception for religious institutions. Florida doesn’t include LGBT people in its anti-discrimination law.

But one state representative said he would like to see that discrimination banned.

Since private schools in Florida get over one billion dollars a year in state funding – Catholic schools are eligible for that money – these are not institutions completely separate from the state.

Conservatives argue that faith should be a part of public life when it comes to getting things they like.

But mixing church and state is a two-way street. If states can give religious schools tax money, then they can put conditions on that money.

Banning employers from writing contracts that dictate the romantic lives of their employees would be a good place to start.