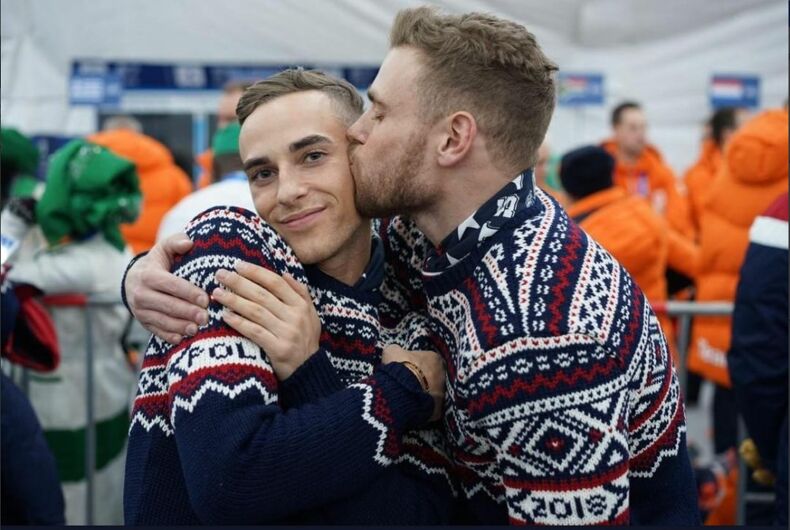 Gay Olympians Gus Kenworthy and Adam Rippon have not been shy with their criticism of Vice President Mike Pence as the choice to lead the Team USA delegation at the opening ceremonies.

Kenworthy and Rippon proudly posted photos of themselves at the ceremonies, looking friendly as can be to one another, but making it clear they still want nothing to do with the VP.

The openly gay athletes shared the snaps on their social media accounts. Kenworthy’s caption on Instagram takes the cake.

“The #OpeningCeremony is a wrap and the 2018 Winter Olympic Gaymes are officially under way!” he wrote. “I feel incredibly honored to be here in Korea competing for the US and I’m so proud to be representing the LGBTQ community alongside this amazing guy! Eat your heart out, Pence. #TeamUSA #TeamUSGay”

The #OpeningCeremony is a wrap and the 2018 Winter Olympic Gaymes are officially under way! I feel incredibly honored to be here in Korea competing for the US and I'm so proud to be representing the LGBTQ community alongside this amazing guy! Eat your heart out, Pence. #TeamUSA #TeamUSGay 🇺🇲🏳️‍🌈

Tonight I walked in the #OpeningCeremony and got to watch my old friend @Yunaaaa light the Olympic flame. Representing the USA is one of the greatest honors of my life and being able to do it as my authentic self makes it all so much sweeter 🇺🇸🏳️‍🌈🏆🌎❤️🔥 pic.twitter.com/ZypvWkUBjD

Rippon came out against the choice of Pence first, noting he was an odd choice to lead a team with two gay athletes, considering he signaled support for conversion therapy while running for Congress, and is part of an anti-LGBT administration.

That alerted Kenworthy to the issue, who revealed in an interview with USA Today that he agreed with Rippon. He reiterated that stance during an appearance on The Ellen DeGeneres Show.

Pence tried to meet with Rippon before the Olympics following the criticism, but was rebuffed. He hasn’t taken the rejection well, claiming that his support of conversion therapy is “fake news,” in keeping with the Trumpian definition of that phrase, meaning anything you don’t like and wish everyone didn’t remember actually happened.