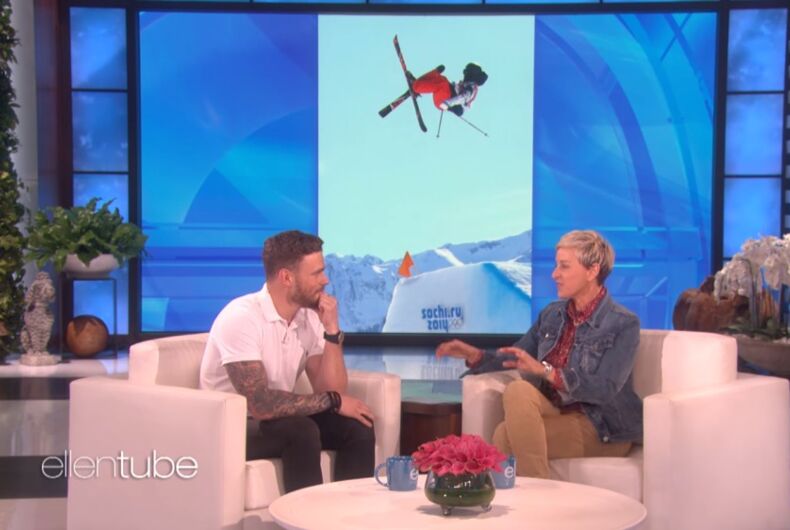 Gus Kenworthy sits down with Ellen to talk about the Winter OlympicsPhoto: Screenshot/The Ellen DeGeneres Show

Gus Kenworthy made an adorably nervous appearance on Ellen to talk about competing in his first Olympics as an openly gay man.

Kenworthy came out in 2015, after winning Silver at Sochi, and he anticipates that this time will be even better because he gets to compete as he has lived for the past three years: Authentically.

After she noted that it was a “big deal” that he is openly gay and going to the Olympics, Ellen asked him what he was most looking forward to this time around.

“I’m kind of looking forward to everything,” he said. “I think it’s just going to be a different experience than last time around, because I’m not in the closet. So I just want to just soak it up. It might be my last Olympics,” he continued.

He added that he hopes to meet as many athletes as he can, ski his best, and get in some karaoke, which he has heard there is no shortage of in South Korea.

“I live for karaoke,” he said, revealing that his favorite song to sing lately has been “Rhythm Of Love” by the band Plain White T’s.

Kenworthy has been vocal about his displeasure with the choice of Vice President Mike Pence to lead the U.S. delegation, due to his anti-LGBTQ record. Kenworthy first heard the news when openly gay figure skater Adam Rippon, who will also represent Team U.S.A., criticized the pick.

He reiterated those concerns.

“It just seems like such a strange choice, for me, because I feel like…we’re in 2018, we’re going into the Olympics, and Adam Rippon and myself are the two first openly gay males competing in the Olympics,” he said. “And its just incredible to see how times have changed, because of people like you, and athletes in the past, and so many people that have paved the way, but to have someone leading the delegation that has directly attacked the LGBT community — and just a Cabinet in general that just sort of stands against us and has tried to do things to set us back — it just seems like a bad fit.”

Related: Here are the out LGBTQ athletes who will compete in the 2018 Winter Olympics

“And I feel like the Olympics is about inclusion and people coming together, and it seems like it’s not really doing that,” he added.

“Yeah, I agree with you, I think it’s a weird choice,” Ellen agreed.

You can watch the exchange below.

Kenworthy will be competing in the freeski slopestyle event.