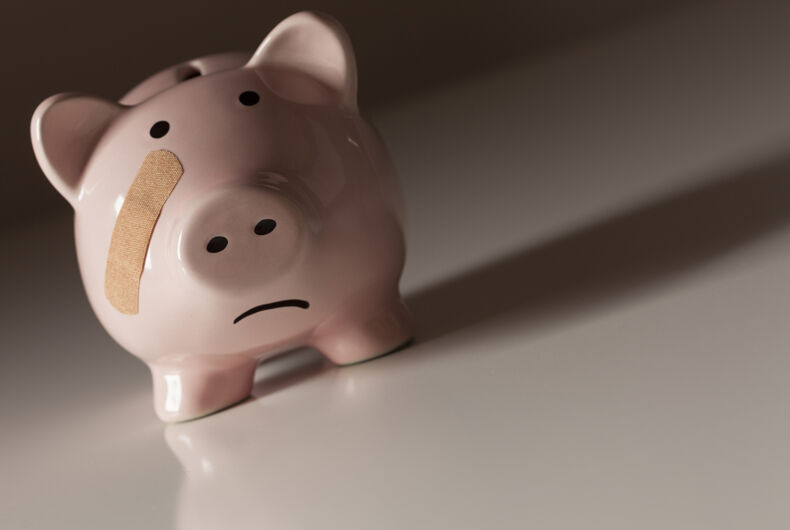 When the Trump administration announced the formation of a new division intended to allow healthcare providers to discriminate against LGBT people and women seeking an abortion, they didn’t tell taxpayers how much it cost them.

A government estimate has now been released that shows the cost to implement the new office will be over $300 million dollars. Pharmacies, doctors’ offices, hospitals, nursing homes, and other medical providers will be forced to pay the cost of printing new employee materials, training staff, drafting policies, and maintaining compliance records.

Experts project it will cost approximately $125 million per year to maintain the system after implementation. The federal government itself will pour almost another million dollars annually into the division.

“We now know exactly how much it means to the Trump-Pence administration to be able to discriminate against a woman in need of reproductive care or an LGBTQ patient seeking medical treatment,” DNC Women’s Media Director Elizabeth Renda and LGBTQ Media Director Lucas Acosta said in a joint statement.

“The Trump-Pence administration is willing to sacrifice hundreds of millions of taxpayer dollars to allow health workers to deny care to Americans in need on the basis of ‘moral conscience.’ This is nothing but a burdensome, costly, and thinly veiled partisan attack from Republicans desperate to sabotage the American healthcare system.”

As if the cost of health care isn’t high enough, that cost will obviously be passed on to the consumer. Since Trump has actively worked to dismantle Obamacare, the increased costs will force countless low income and unemployed Americans even further into debt.

Under the Trump administration, the religious right has made a concerted effort to roll back all gains in LGBT civil rights made under the Obama administration. Minutes after Donald Trump was sworn into office, any mention of the LGBTQ community were erased from White House, Department of State, and Department of Labor websites.

Related: 45 times Trump attacked the LGBT community in his first year in the White House

Last May, the administration revealed their budget which included slashes to programs and departments critical to the LGBTQ community, including Medicaid, Planned Parenthood, and the Center for Disease Control’s HIV and AIDS programs. The next month, Trump failed to mention the LGBTQ community in his National HIV Testing Day statement.

The Associated Press reports that out of the approximately 18 million people who work in the healthcare industry, only 40 complaints were filed last year.

“This is looking for a problem,” Susan Berke Fogel, a lawyer for the nonprofit National Health Law Program, told the news service.

Your Grindr & Jack’d accounts can be hacked